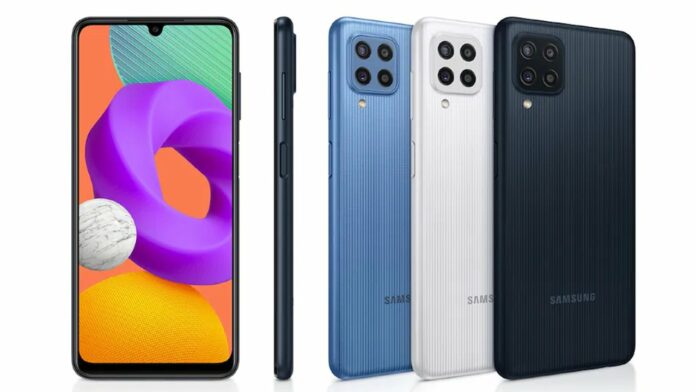 Samsung is gearing up to launch a new smartphone under its M-series. The device is named as Samsung Galaxy M22, and its India support page has now gone live on the Samsung website.

The Galaxy M22 is listed with model number SM-M225FV/DS as per Samsung India’s support page. The DS in the model number suggests dual sim support. However, the listing does not reveal any specs of the upcoming Samsung smartphone, but it suggests that the Galaxy M22 may soon be making its debut in India.

Last month, Samsung launched the Galaxy M22 in Germany. The device has an octa-core processor, a quad-camera setup, Android 11 and a 5000mAh battery. It comes in Black, White and Blue colours.

The Samsung phone features a 6.4-inch HD+ display with 720×1600 pixels resolution. Further, the display comes with a 90Hz refresh rate and a 20:9 aspect ratio.

It packs a 2GHz octa-core processor, which appears to be the Helio G80. The phone has 4GB RAM and 128GB of storage. The storage is expandable via a microSD card (up to 1TB).

For photos and videos, the phone comes with a quad rear camera setup. It has a 48-megapixel primary camera, an 8-megapixel ultrawide snapper with a 123-degree FOV, a 2-megapixel depth sensor, and a 2-megapixel macro camera. For selfies and video calls, the device uses a 13-megapixel shooter.

As for software, the handset runs One UI-based Android 11. There’s also a 5,000mAh battery with support for 25W fast charging. It claims to last for up to 25 hours of internet usage, up to 30 hours of video playback, up to 106 hours of music playback, and up to 38 hours of 4G LTE talk time. In addition, it includes a side-mounted fingerprint scanner for security. The phone also has face recognition as well.