Samsung Galaxy M20 vs Realme U1 Camera Comparison: Who is better? 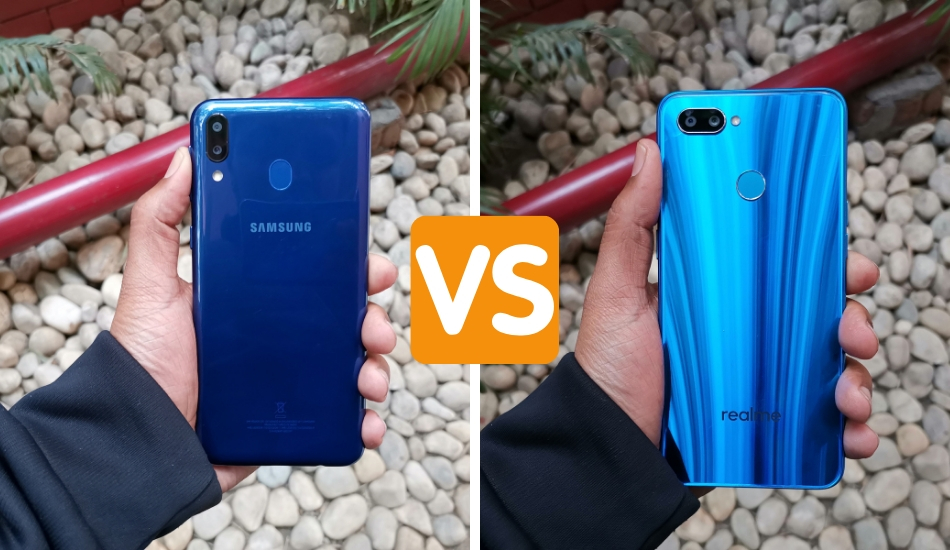 Let's talk about the camera capabilities of both the devices and how strong competition the phones give to each other in the photography department. So, without further ado, let’s get started.

Samsung recently introduced a new M-series meant for the millennials in India with the launch of Galaxy M10 and Galaxy M20. Both the smartphones come loaded with new design and feature competitive hardware specs to give a stiff competition to its rivals.

Although the Galaxy M10 is meant to compete with budget range, the Galaxy M20 is meant to fight in the mid-budget segment. The Samsung Galaxy M20 comes with a host of interesting features and it comes with a price tag of Rs 12,990 for the 4GB RAM variant. However, there is one smartphone from a new-age brand, Realme, which gives a pretty stiff competition to the Galaxy M20. Yes, we are talking about Realme U1. The smartphone comes with a starting price of Rs 10,999. So, in this article, we will talk about the camera capabilities of both the devices and how strong competition the phones give to each other in the photography department. So, without further ado, let’s get started.

Before moving to the camera comparison of the Samsung Galaxy M20 and Realme U1, let us give you a brief about the camera hardware. Starting with Samsung Galaxy M20 features a dual-camera setup with a combination of 13-megapixel primary lens with f/1.9 aperture and a 5-megapixel ultra wide-angle lens. For the front, there is an 8-megapixel shooter for selfies and video calling. 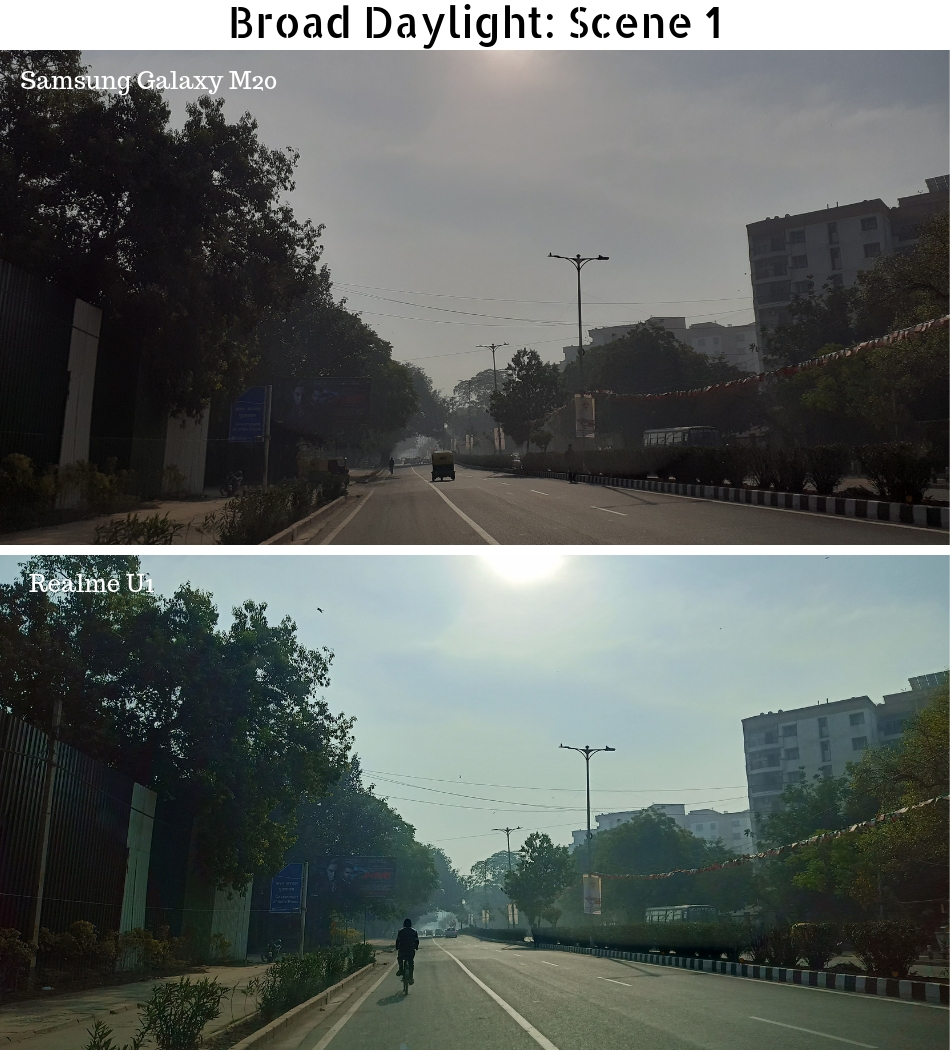 The first photo we took in the broad daylight condition was of a road. The result is pretty much clear here. The Samsung Galaxy M20 did an average job as the photo came out to be dull and yellowish tone was particularly prominent in the photo. On the other hand, the Realme U1 did a good job in capturing colour close to the source, though we felt there was a slight bluish tone in the image. That said, the Realme U1 performed much better in this photo. 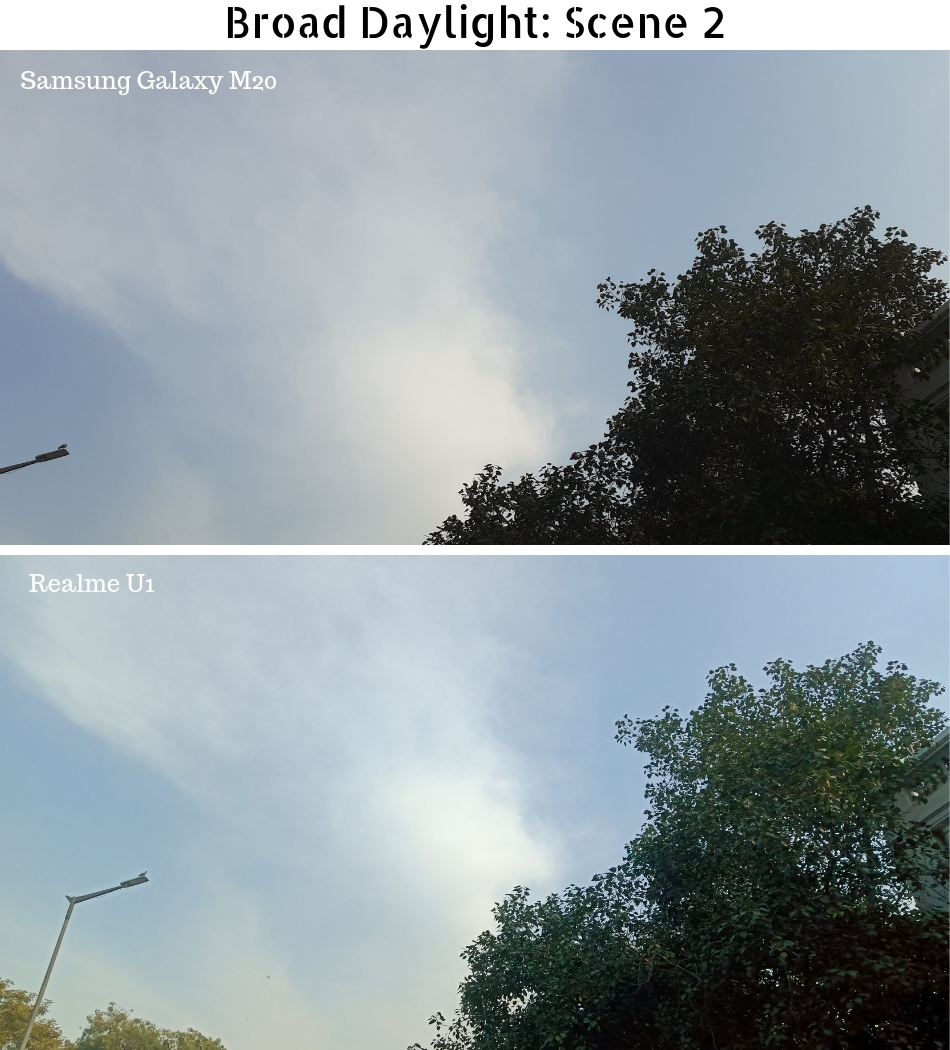 Second photo we took of the sky. Starting with Samsung Galaxy M20, the photo taken from it come out to be darker than we expected. The phone was not able to render the backlight situation and this resulted in the loss of details and colour reproduction seen in the image. The colour of the sky also looks pale in the photo taken from Galaxy M20. Realme U1 did a much better job again as it was able to capture colours that were more close to the source. The detailing came out to be just fine and the colour of the sky was looking more natural as compared to the Galaxy M20. 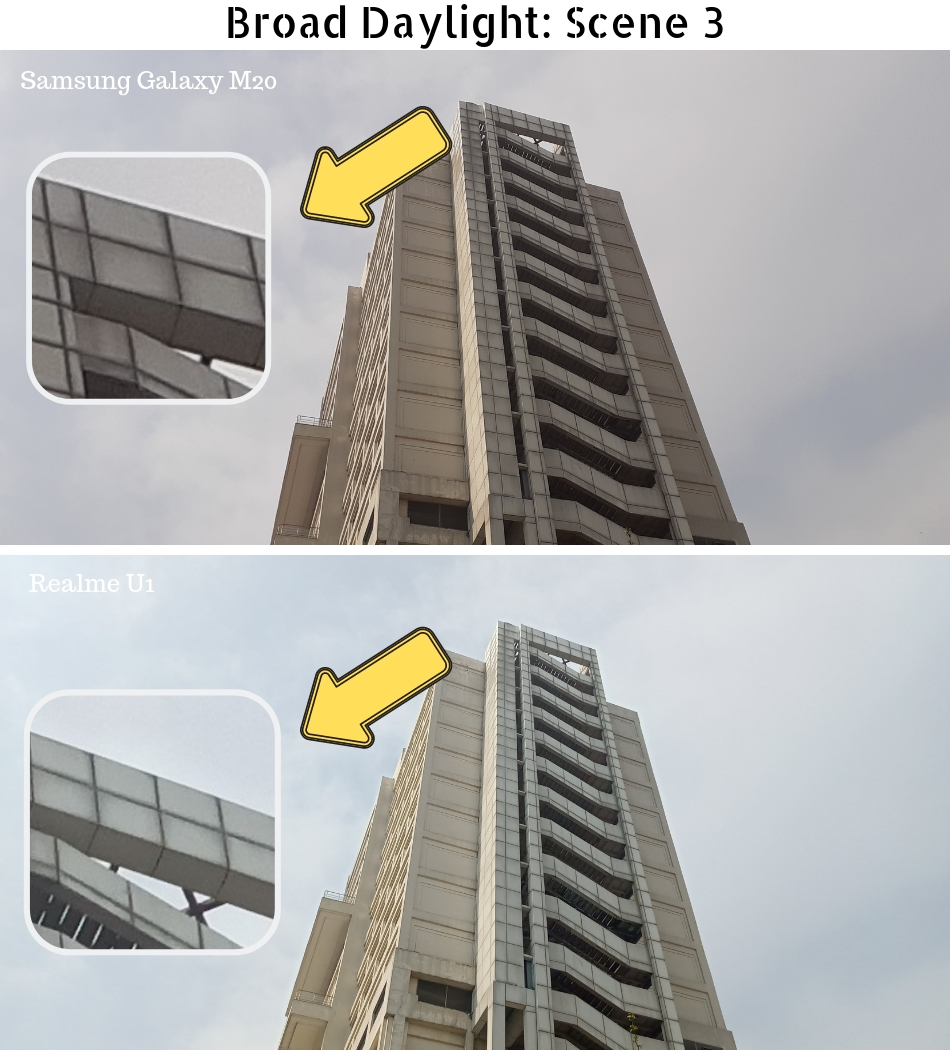 In the third image, which is of a building. It is once again clear that Samsung Galaxy M20 is reproducing warmer colour temperature as compared to the Realme U1. The detailing is good and one can clearly see the pattern of the top of the building. Coming to Realme U1, the phone captured the natural-looking shot as compared to the Galaxy M20 and the colours were close to the source.

Overall, the Realme U1 does a better job in capturing images in broad daylight. The smartphone delivered pictures which were close to the source and detailing was better than the Galaxy M20. The smartphone from Samsung delivered some dull images in this segment and the images were not that appealing. 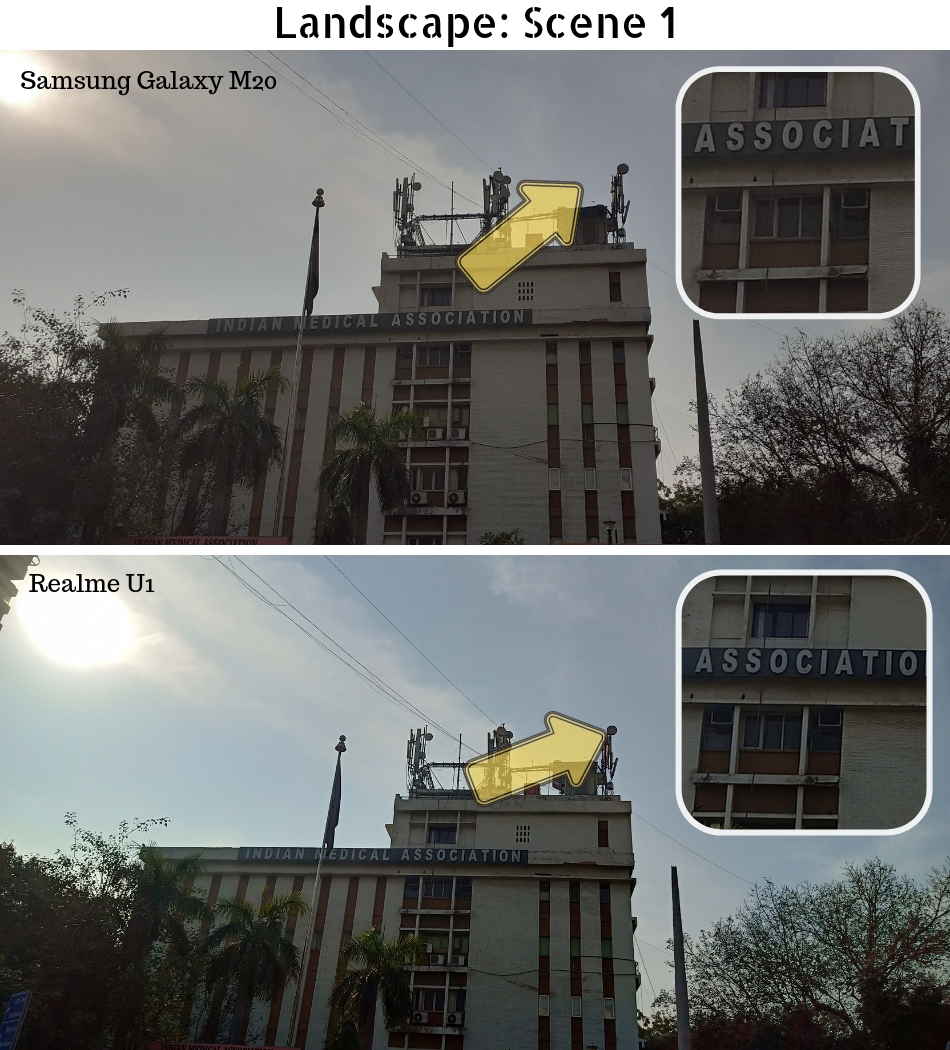 The first photo we took in this segment was of this scene and the results are quite contradictory for both the smartphones. Interestingly, both the phones were able to capture good details, but we noticed some problem with the colour temperature. On one hand, the Samsung Galaxy M20 delivered warmer colour tone, while on the other, Realme U1 was offering a cooler colour temperature. In U1 sky was looking better butthe colour of the building is warmer. In Samsung Galaxy, M20 sky looked dull, though the colour of the building was looking close to the source. 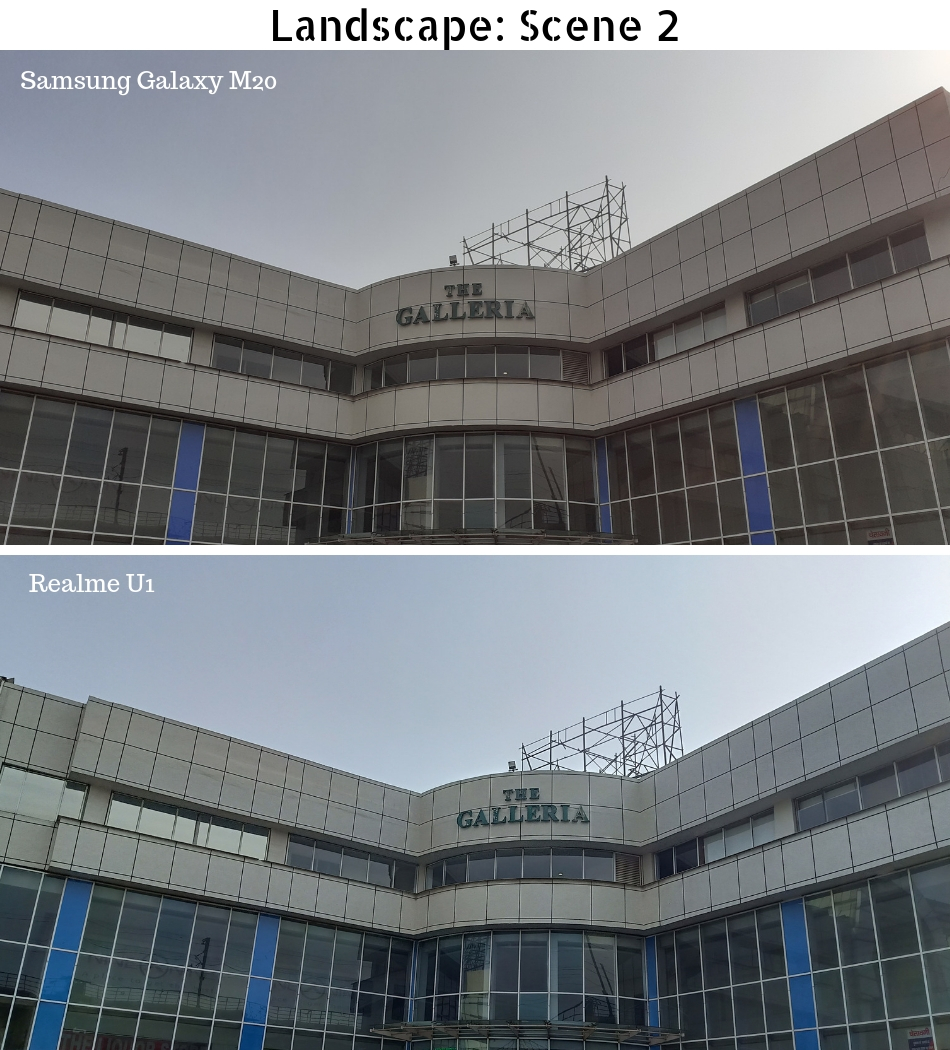 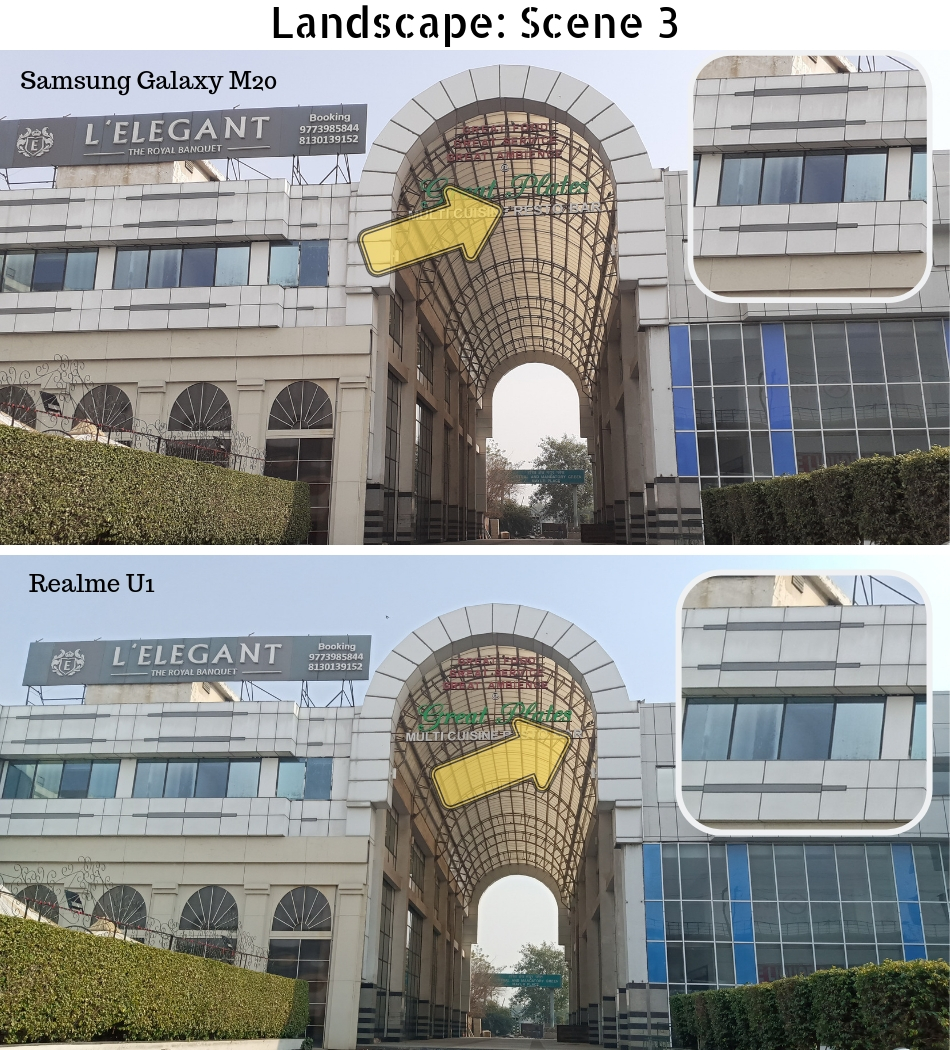 In the third image, things got really competitive. Both the phones did a good job in capturing a photo that was not only crisp and details were to the point. However, once you zoom into the image, you will see that Realme U1 does a slightly better job as compared to the Samsung Galaxy M20. We also saw a slightly warmer colour temperature in the Samsung Galaxy M20, while the Realme U1 showed a slight bluish tone. Overall, if have to pick a winner out of the two devices than Realme U1 does a marginally better job, though we felt it was delivering cooler colour temperature in lots of photos. 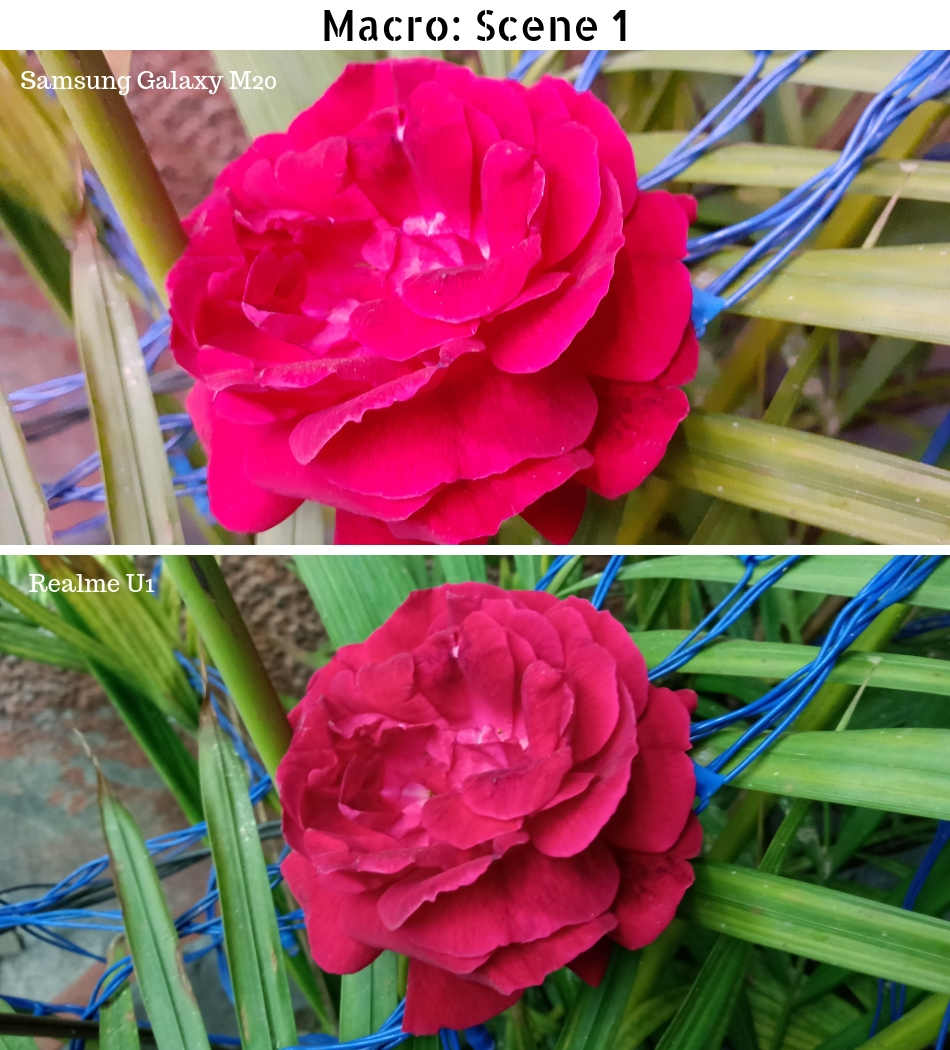 In the first image, both the smartphones were able to properly focus on the subject. The flower in both images came out to be a bit blurry in nature. Coming to the colour reproduction, the Realme U1 delivered much better colours, which were quite close to the source. However, the Galaxy M20 showed some washed out colours in our opinion and there was a certain warmer colour tone present in the image. 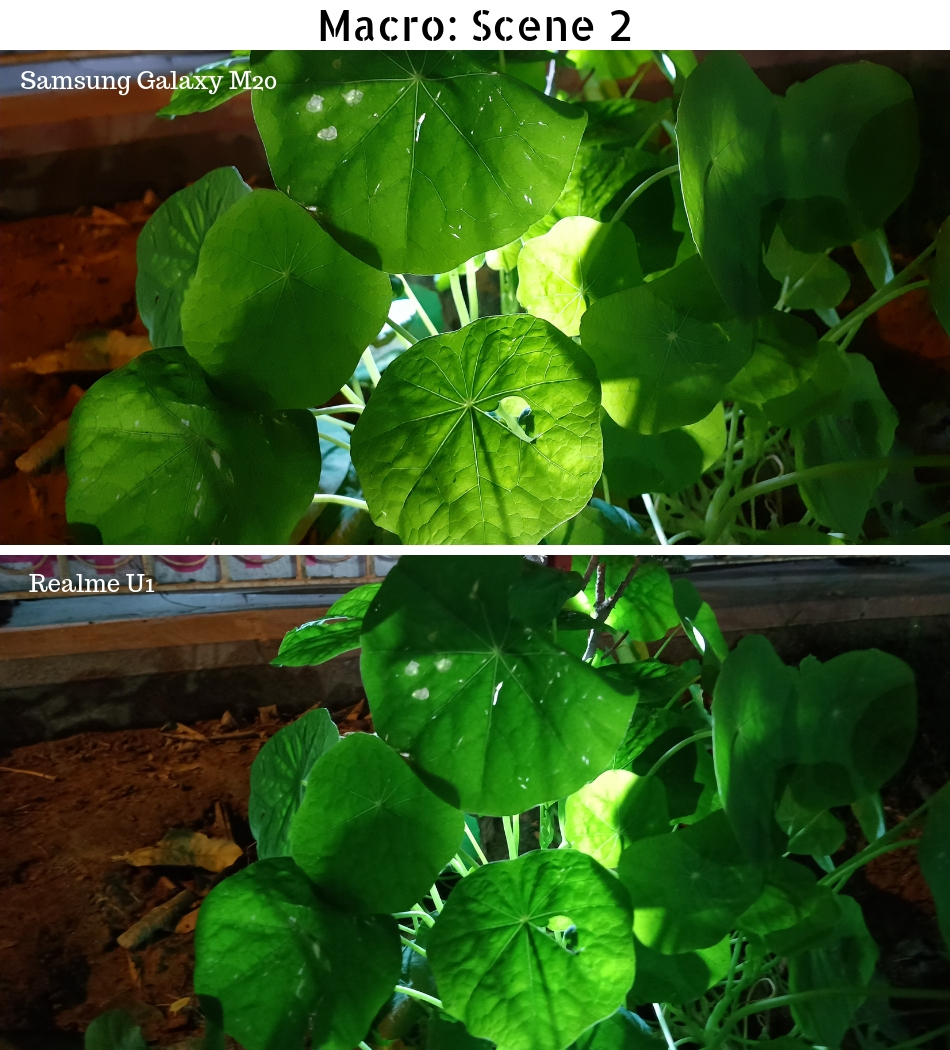 The second photo was taken of a plant in low light condition. In this photo, Samsung Galaxy M20 made a comeback as the image showed better colours as compared to the Realme U1 and the detailing was much better. One can easily see the pattern of the leaves in the Galaxy M20, while these details were absent in the Realme U1. 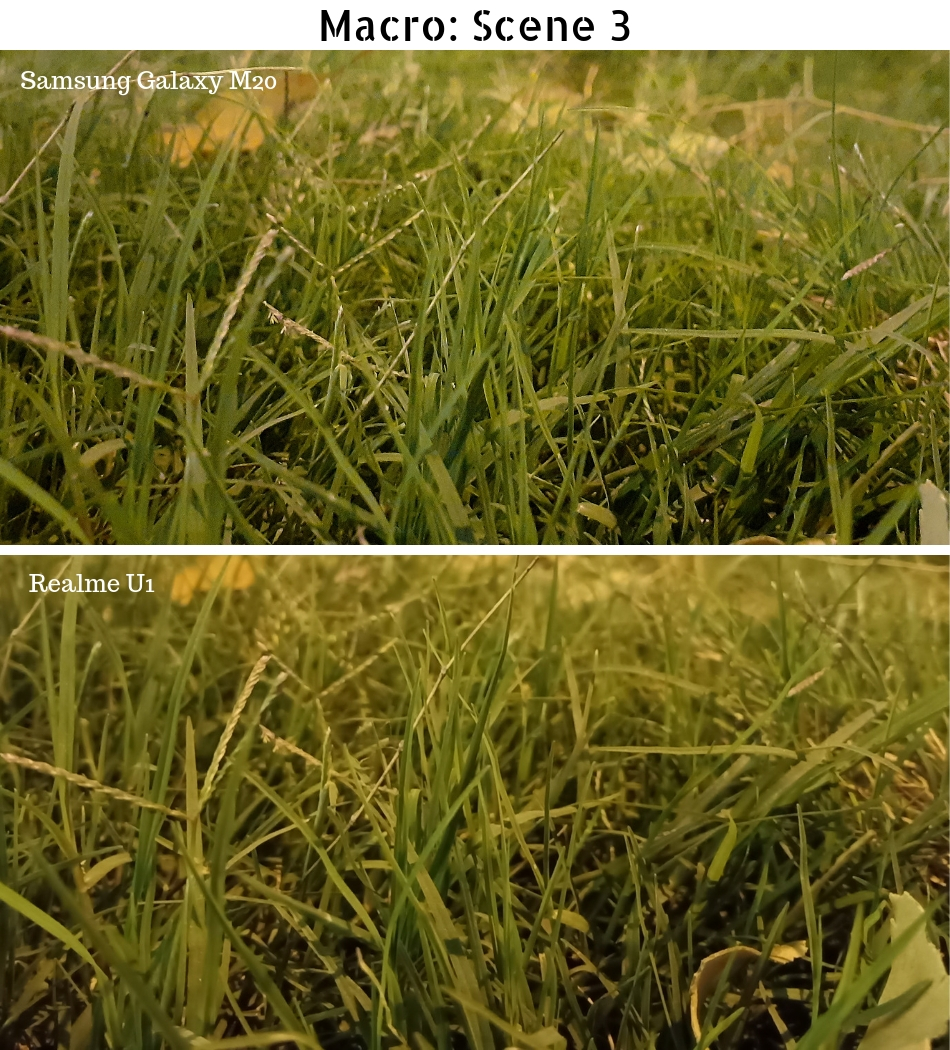 Lastly, we took another photo in low-light condition and this time it was grass. For the first time, we noticed that Realme U1 was showcasing warmer colour temperature as compared to the Galaxy M20. Also, we noticed that the U1 struggled to lock focus on the grass. The Samsung Galaxy M20 did a better job here as it was able to lock focus on the grass and the detailing was much better in this photo. 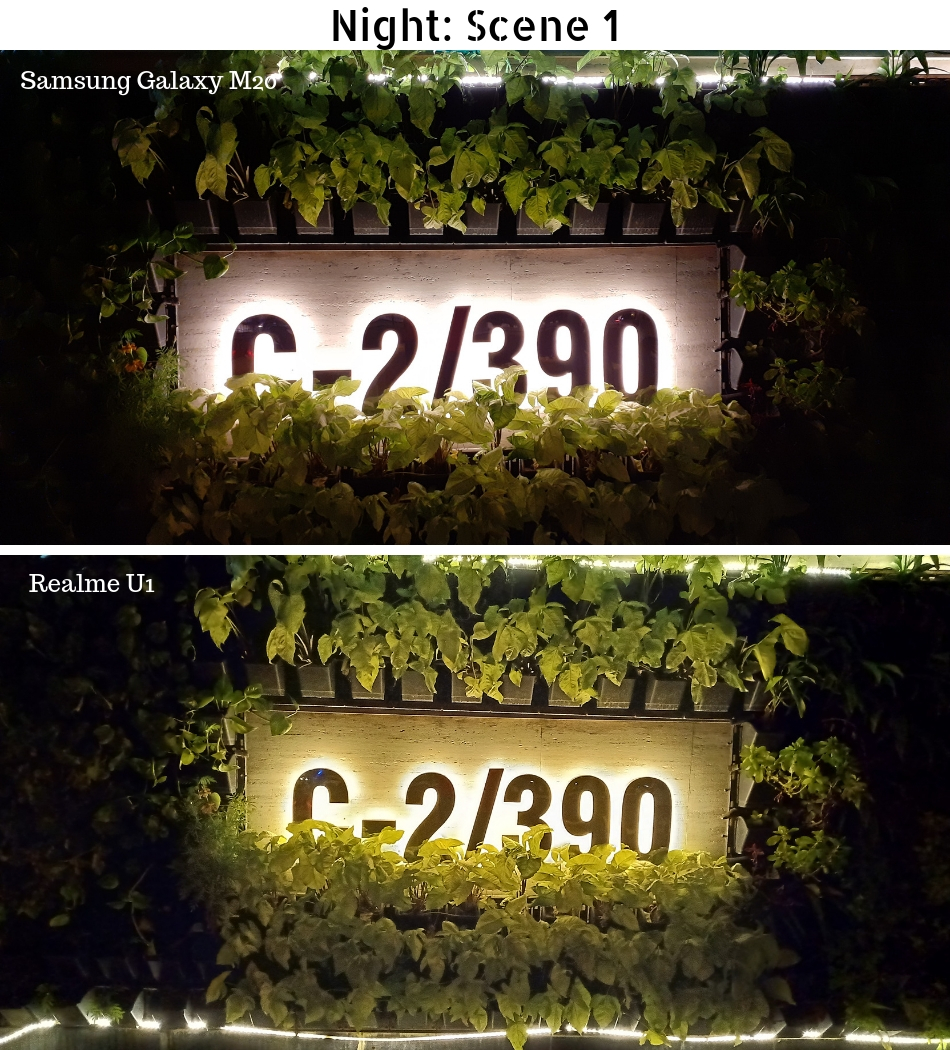 Starting with the first image in the low light segment, Samsung seems to be leading here as well. The photo came out to be good as it was able to handle the complex lighting situation effectively. The colours were close to the source and the details were decent as you can see the different shades of leaves in this image. Coming to Realme U1, the image was slightly brighter as compared to the Galaxy M20, however, the detailing is not that great as the different shades of leaves are not visible in this image. 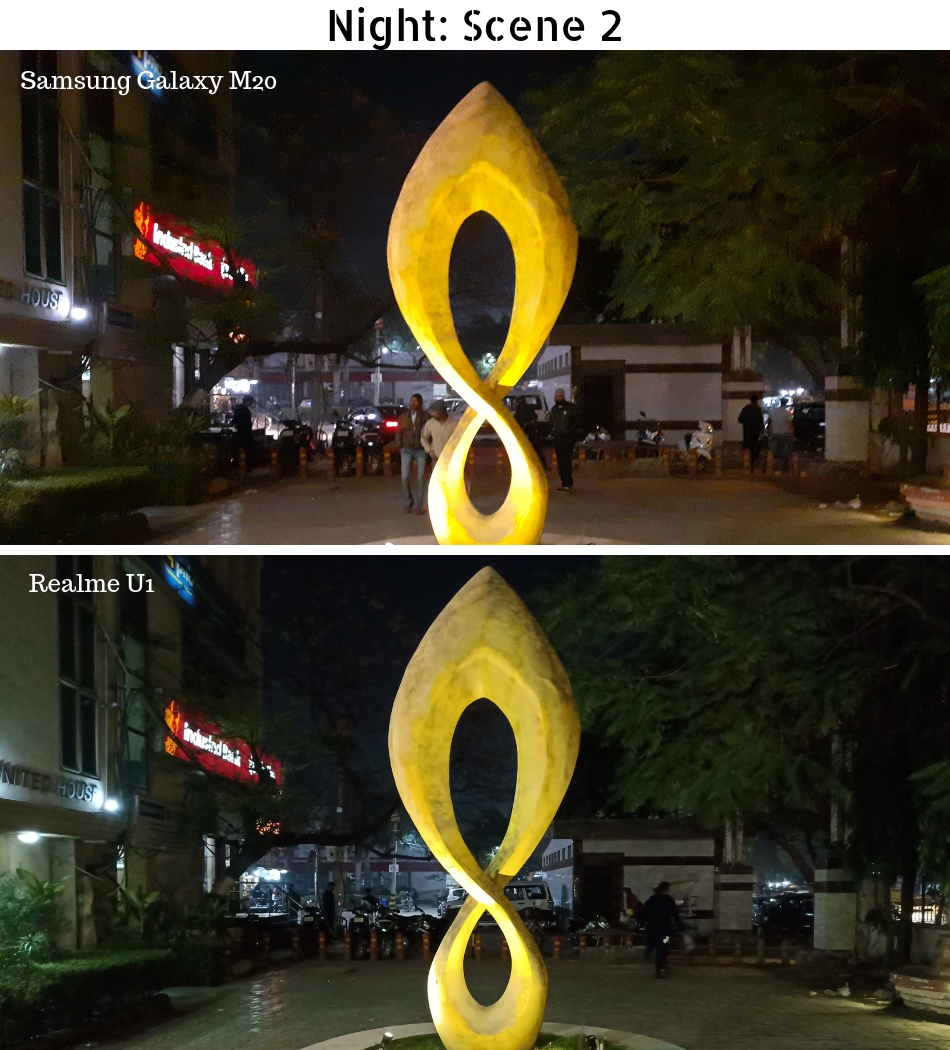 In the second image, the Realme U1 does a better job in capturing the right colour tone. Samsung Galaxy M20 was showing a warmer colour tone. Both the phones did not a good job when it comes to capturing details and noises were quite prominent in both the images. 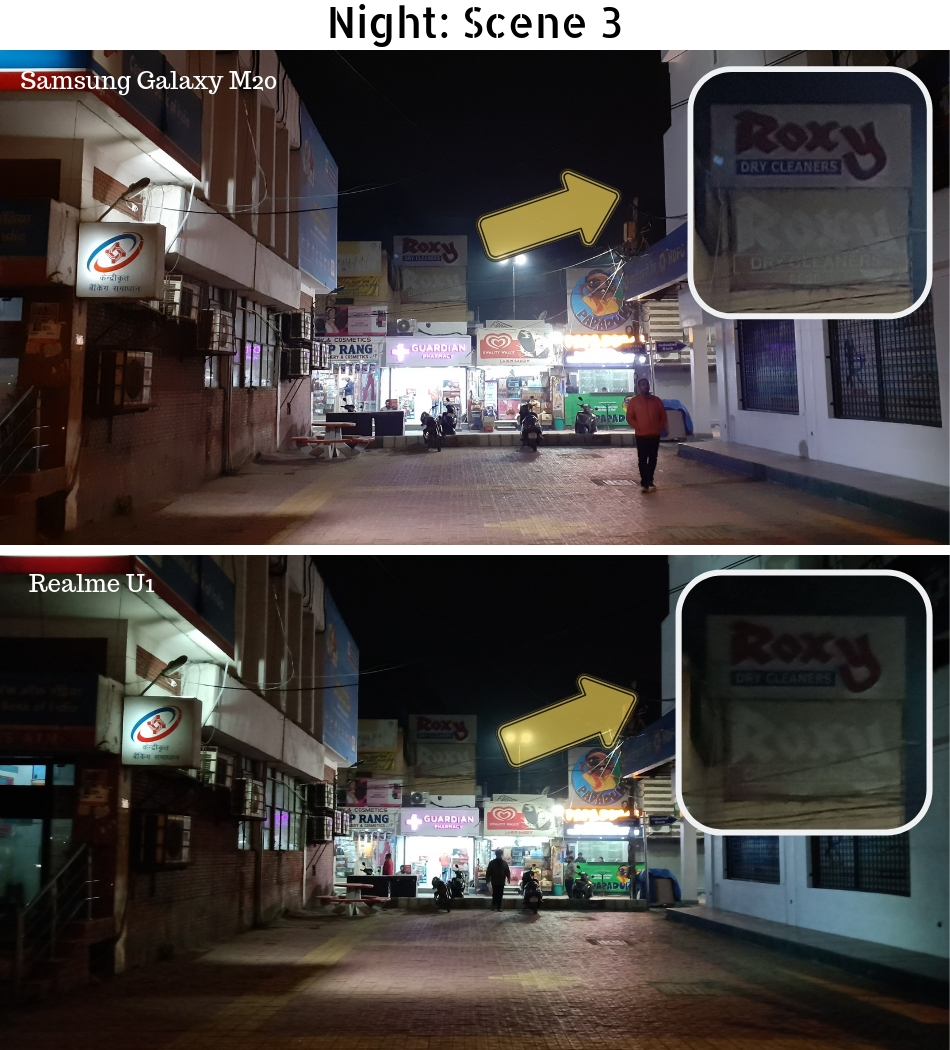 Overall, both the smartphones did quite an average job in capturing low light shots and the performance was inconsistent. The Samsung Galaxy M20 does a marginally better job in capturing details in the first and last image as compared to the Realme U1, so this round goes to Samsung. 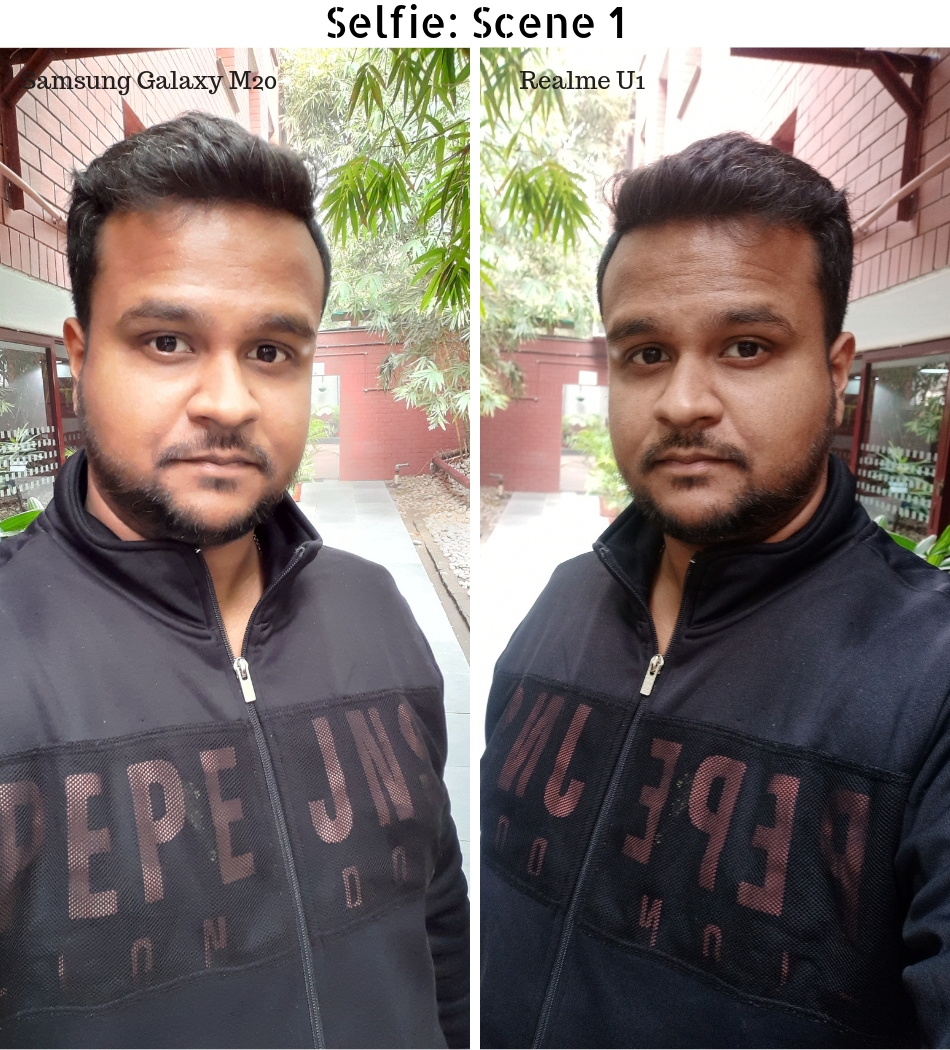 Coming to the selfie department, both smartphones did a good job. Starting with the first image, Samsung Galaxy M20 delivered good selfie, though colours a bit washed out. The phone was able to capture the background details in a decent manner. Coming to the Realme U1, we got a good result as well. The phone captured the right colour tone of the skin and clothes, though it slightly overexposed the background. 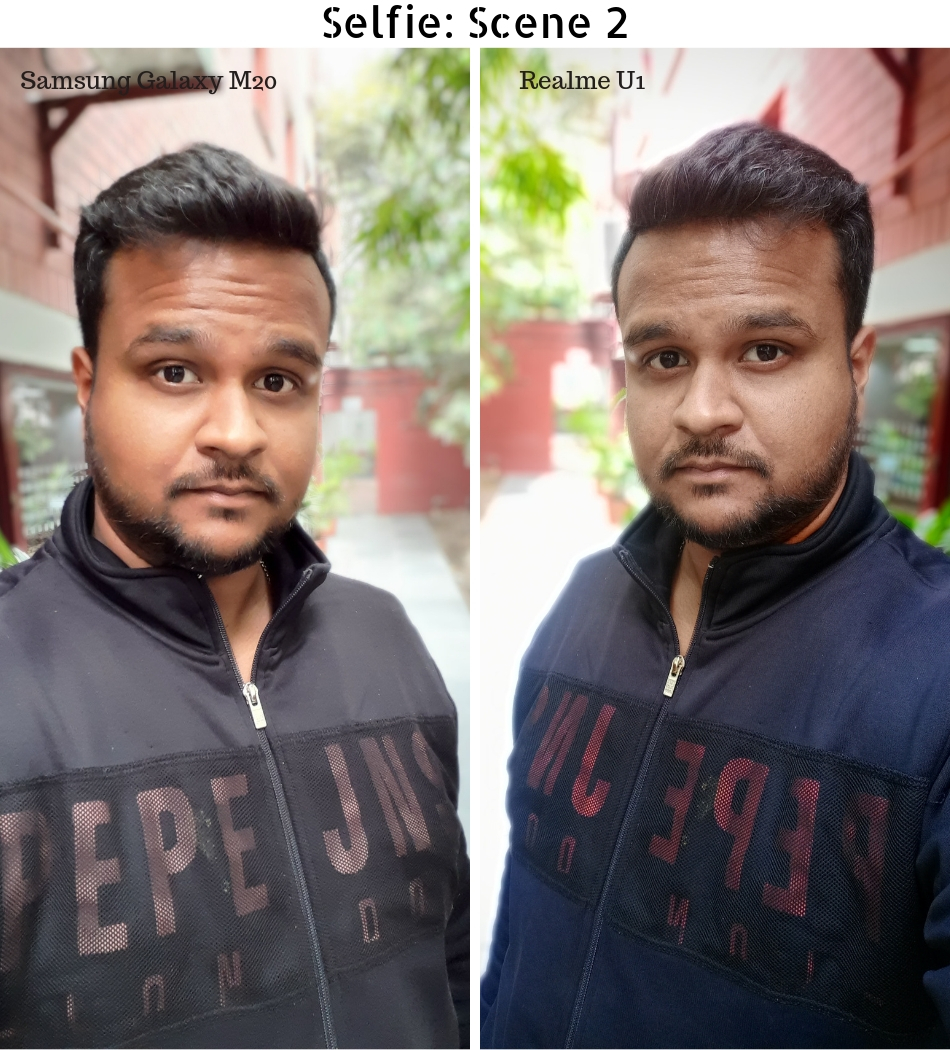 In the second photo, the selfie was with bokeh effect on and the result was pretty interesting. Starting with the Realme U1, the phone captured fairly well-detailed shots and it rightly blurred the background. The phone was able to detect the edges, which is resulted in minimal distortion. However, the photo came out to be a bit oversaturated in nature. Coming to Galaxy M20, the smartphone was a did a good job in blurring out the background, though we can clearly see some bleeding around the edge of the subject. The colours were a bit washed in nature as well. 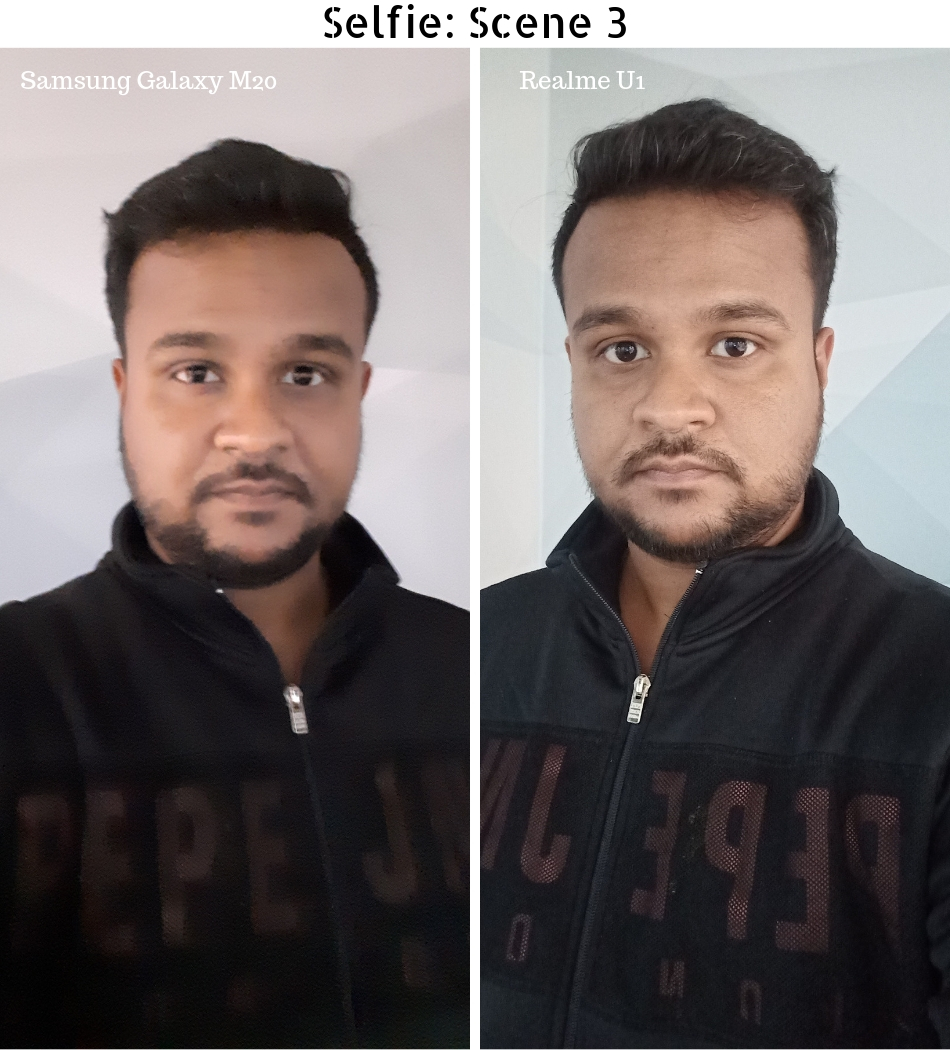 In low light condition, the Realme U1 did a better job in capturing details as compared to the Galaxy M20. The Realme U1 took the right amount of light when you capture the selfie and colours were close to the source. The Galaxy M20 did a below average job here. The photo came out to be full of noises and the detailing clearly went for a toss here. 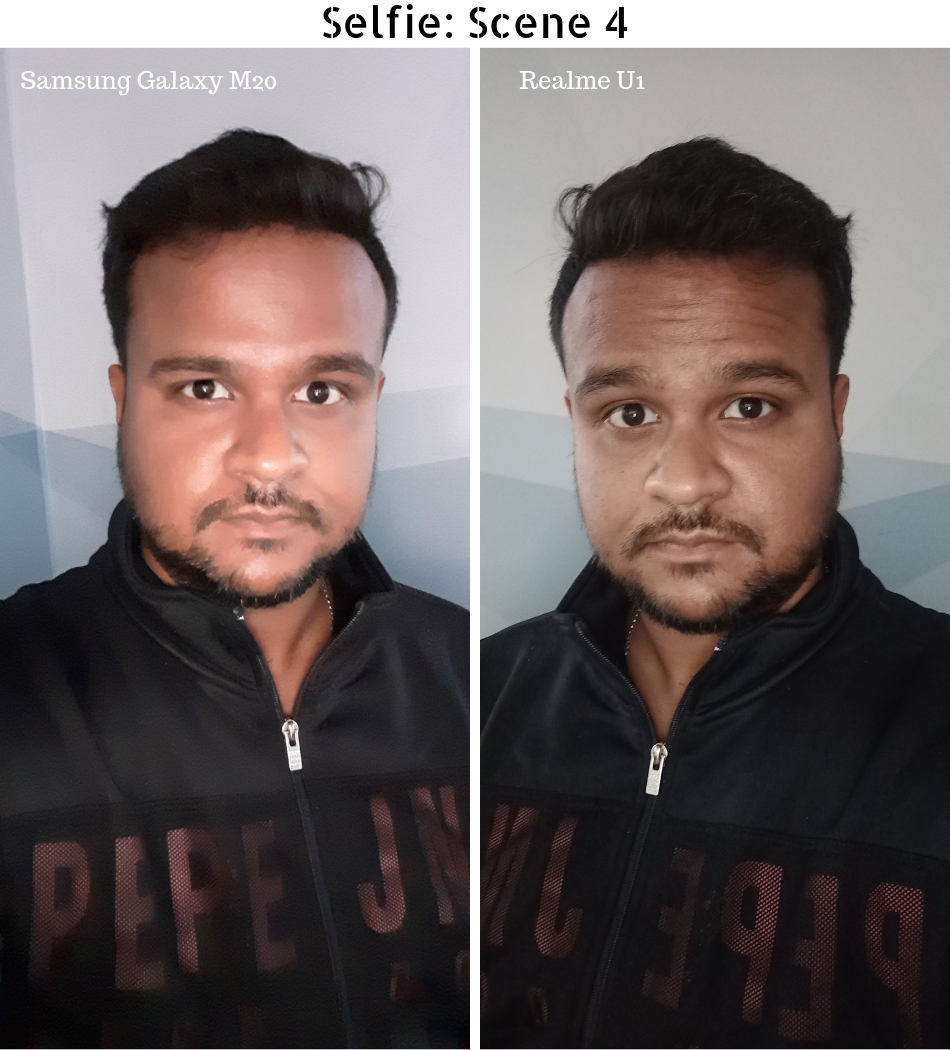 Overall, the answer is pretty obvious here. Although, both the smartphones did a decent job in broad daylight, the Realme U1 appeared to give much better shots when it comes to the details and the portrait mode for selfie was better with Realme U1. Further, the Samsung Galaxy M20 performed poorly in the low-light scenario. 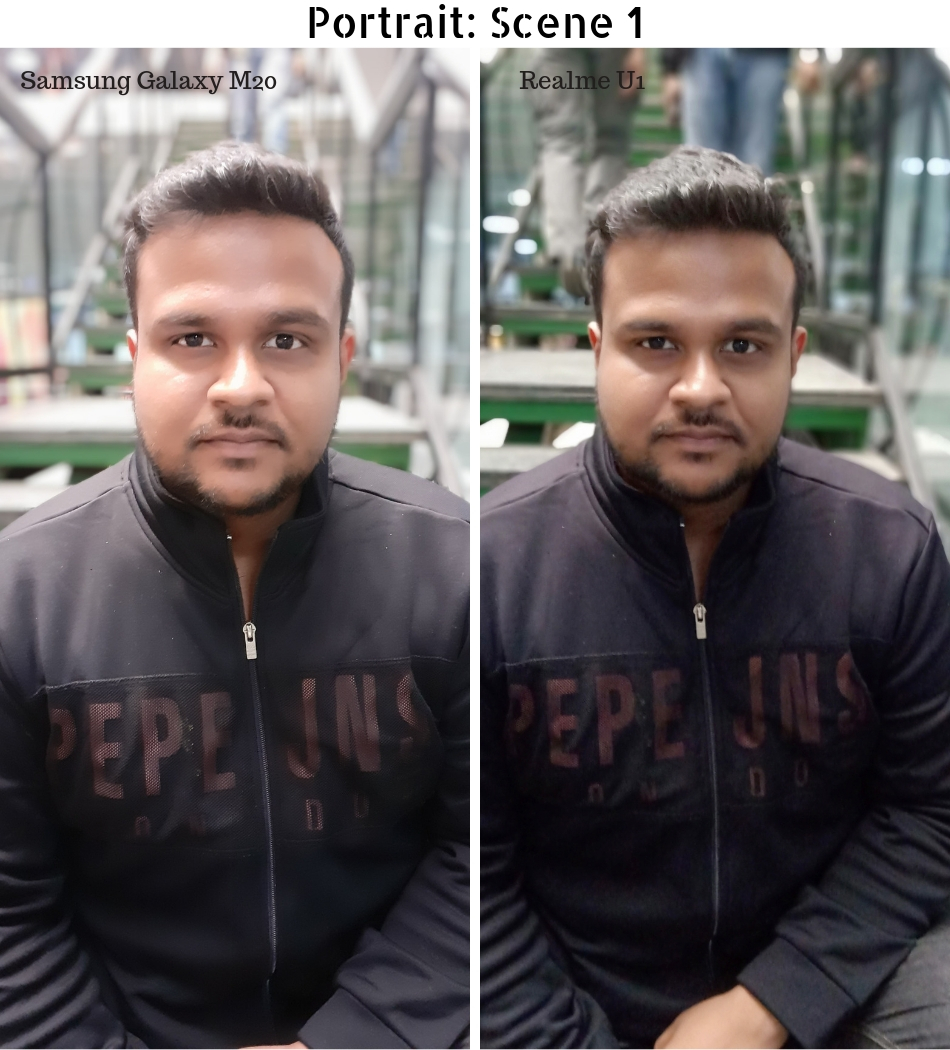 Coming to the portrait shot, the competition was quite close between the two handsets. Starting with the first image, Samsung Galaxy M20 was able to focus properly on the subject, while blurring out the subject. The edges came out to be clean in this photo, though it slightly looks overexposed in nature. Coming to the Realme U1, the subject appeared to be softly focused, though the colours were close to the source. 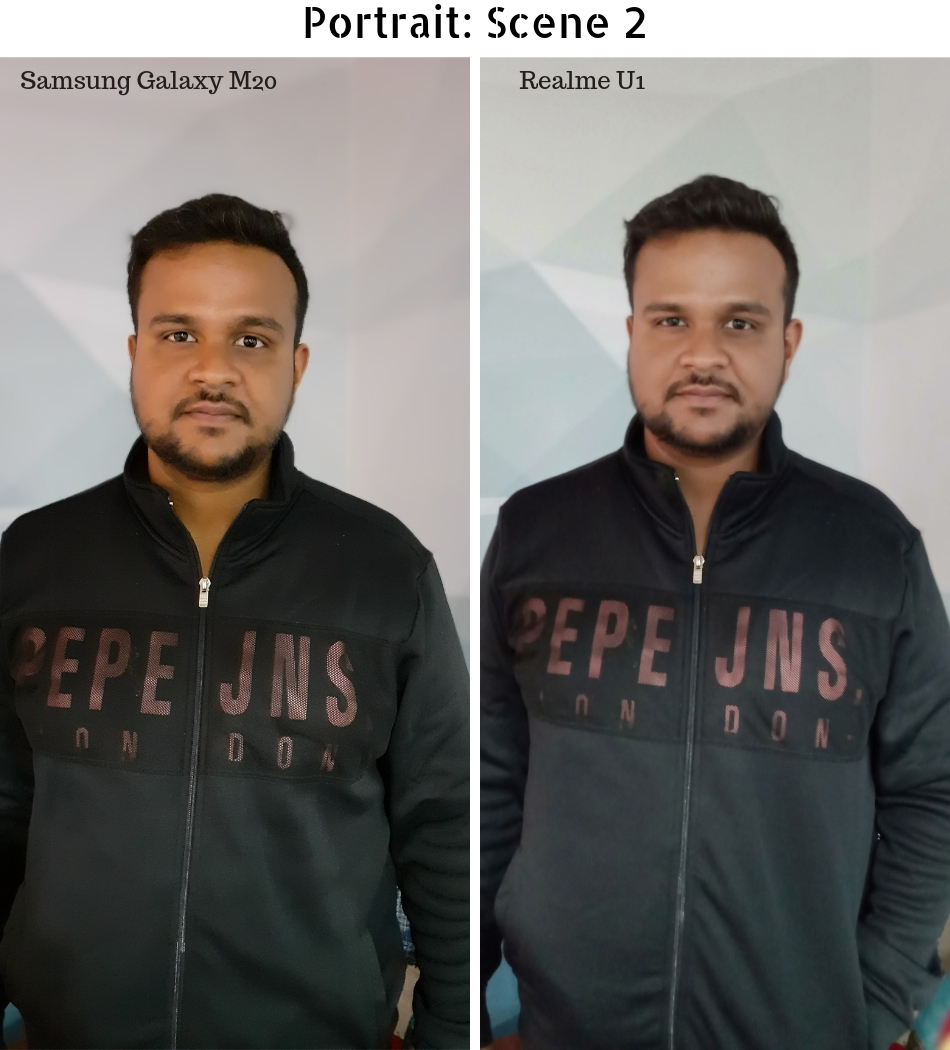 In the second image, we tested Portrait mode in low light condition. The Realme U1 performance was not up to the mark as the phone was not able to focus properly on the subject. We tapped on the subject to focus, but still, the result remained the same. The Samsung Galaxy M20, on the other hand, did a better job of locking focus on the subject. The smartphone was able to highlight the subject, though we noticed some bleeding around the edges. Also, we noticed that the face skin colour was slightly on the warmer side in the Samsung Galaxy M20.

That said, the competition is quite close in this round as both the handsets gave quite average results in our opinion. However, we still need to pick a winner of this round, so Samsung Galaxy M20 is the winner as it was able to focus on the subject as compared to the Realme U1.

Both the Realme U1 and Samsung Galaxy M20 gives stiff competition to each other. The Realme U1 delivers a good result in broad daylight situation and in landscape mode. The Samsung Galaxy M20, on the other hand, does a marginally better job in macro and low light department. Coming to the selfies, the Realme U1 emerges as a clear winner, though in Portrait, Samsung had an edge.

That said, Samsung Galaxy M20 delivered warmer colour temperature across its range of photos, while Realme U1 did a slightly better job. So, as for the winner is concerned, it has to be Realme U1 as the phone delivered good photos in broad daylight and selfie performance was way better than Samsung Galaxy M20.