The support page was removed by the company soon after it was spotted by users.

We already know that Samsung’s Galaxy M-Series smartphones will be launching in India in January 2019. Now ahead of the launch, the support page for Galaxy M10 has gone live on Samsung India’s website.

Samsung Galaxy M10 with model number SM-M105F/DS was first spotted on the Samsung India support website by DroidShout. However, the support page was removed by the company soon after it was spotted by users. Also, the DS in the model number hints towards the support for dual-SIM. 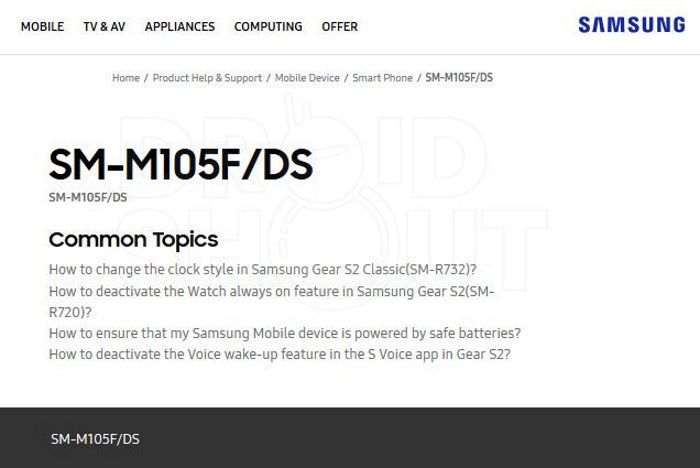 The support page however does not actually reveal anything new about the Galaxy M10 but it does suggest that the smartphone will soon be launched in India. Along with the Galaxy M10, Samsung is also expected to launch the Galaxy M20 in India.

Samsung Galaxy M10 specs were recently leaked via FCC Certification. As per the listing, the Samsung Galaxy M10 will sport a 6.5-inch display. The smartphone will be powered by the Exynos 7870 SoC, coupled with 3GB of RAM with 16GB/32GB of internal storage expandable up to 64GB via a microSD card. It will run Android 8.1 Oreo with Samsung Experience on top of it.

The Samsung Galaxy M10 will be backed up by a 3,400mAh lithium-ion battery and it will have connectivity options like 4G VoLTE, 802.11 Wi-Fi and Bluetooth v4.2. The phone will measure 155.7×75.8mm. The fingerprint sensor on the Samsung Galaxy M10 is likely to be on the back