The original Samsung Galaxy J7 which was launched in India back in the year 2015 with the Android Lollipop operating system has now got WiFi certification from the WiFi Alliance (WFA) with Android 7.0 Nougat onboard. The listing simply implies that Samsung is perhaps testing the latest software and may release the same for the device soon. Originally running Android Lollipop, the device was later updated to 6.0.1 Marshmallow last year.

As per the listing, Samsung Galaxy A7 2015 will support single-band Wi-Fi a/b/g/n (2.4GHz) and Wi-Fi Direct connectivity features. Sadly, the listing does not show any specifications except that the device will be powered by Android 7.0 Nougat operating system. The listing also reveals that the smartphone boasts the model number as SM-J701M with the certification ID WFA72345 and the date of certification being 9th June 2017. Since the device has got the got WiFi certification, we would expect the device to get Nougat update soon. 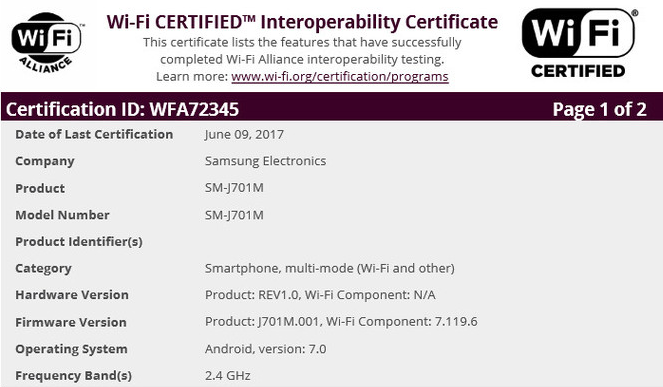 The Samsung Galaxy J5 has a 13-megapixel rear auto focus camera with a LED flash light. In the front, there is a LED flashlight too which helps a 5-megapixel selfie camera. This handset has a 2600 mAh Li-Ion battery and offers dual SIM, LTE (4G), WiFi, WiFi Direct, WiFi Hotspot, Bluetooth 4.1 A2DP, NFC, FM radio with RDS, micro USB port, and GPS with A-GPS and Glonass and Beidou.