The Galaxy J5 Prime (2018) has a 12-megapixel autofocus camera and a LED flash on its rear panel while an 8-megapixel camera is in its front for selfies.

The Samsung Galaxy J5 Prime (2018) recently got the necessary approval from Federal Communications Commission (FCC) revealing only the smartphone’s basic specs. Now some more details about the Samsung’s upcoming smartphone has been leaked, thanks to Slashleaks revealing full specifications. 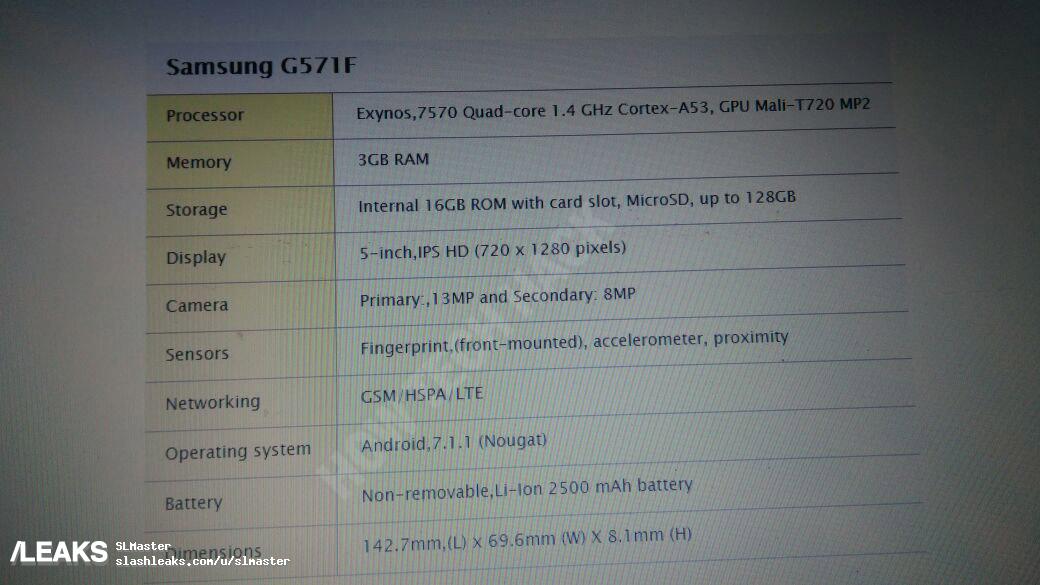 The leaked specs reveal that the Samsung SM-G571 aka Galaxy J5 Prime (2018) will feature 5 inch HD IPS display with 720 x 1280 pixel resolution. It will be powered by Exynos 7570 chipset with 1.4 GHz quad-core processor and ARM Mali-T720 graphics. The device will with 3GB RAM, 16Gb internal storage and 128GB expandable memory via micro sd card slot. It will feature the fingerprint sensor which will be embedded into the front of the device below the display.

The Samsung Galaxy J5 Prime (2018) runs on Android 7.1.1 Nougat operating system and will be backed up by a non-removable 2500mAh battery. For the camera, the device will feature a 13-megapixel rear and 8-megapixel front camera. The connectivity features include Bluetooth 4.2 Low-energy (LE), Wi-Fi 802.11 b/g/n, and 4G LTE. The device measures 142.7 x 69.6 x 8.1 mm and will have accelerometer and proximity sensor.

The Samsung Galaxy J5 Prime (2018) was also was spotted on GFX Benchmarking website as per which the device has a 4.8-inch display that has 1280×720 pixels resolution and five finger gesture support. Besides as per the listing, it has Samsung’s in-house Exynos 7570 1.4 GHz quad-core processor, 3GB RAM, 32GB of internal storage out of which 25GB will be reserved for the users, Mali T720 GPU and Android 7.1.1 Nougat operating system.

The Galaxy J5 Prime (2018) has a 12-megapixel autofocus camera and a LED flash on its rear panel while an 8-megapixel camera is in its front for selfies. The GFX listing shows that the device has connectivity features like Bluetooth, GPS, and WiFi. As per the listing, the device has accelerometer and gyroscope sensors as well.