The Galaxy J3 2017 is said to run on Android Nougat operating system.

Seems like Samsung is getting ready for the launch of its Samsung Galaxy J3 (2017) smartphone soon in the United States. As per the reports, the device has got the all necessary approval from Federal Communications Commission (FCC) that regulates interstate and international communications by radio, television, wire, satellite and cable in the US.

The FCC document, however, does not reveal anything apart from the two models of the device which are SM-J330F/DS and SM-J330F which is the model number of the Galaxy J3 (2017). The model SM-J330F supports single SIM while SM-J330F/DS supports dual SIM. 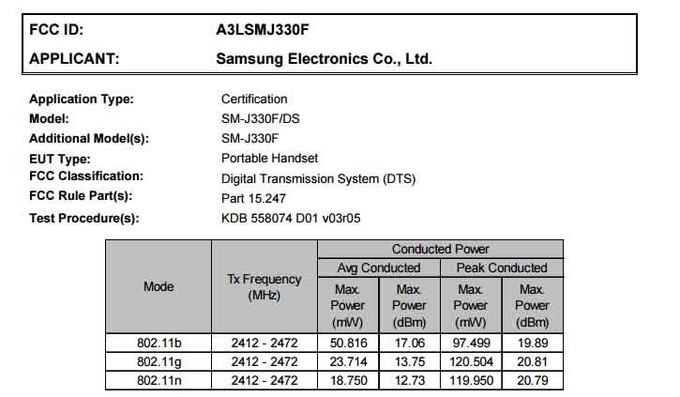 The Samsung Galaxy J3 (2017) received WiFi certification from the WiFi Alliance (WFA) and was also spotted on a GeekBench benchmarking website last month.

In the GeekBench listing, the Samsung Galaxy J3 (2017) got 631 points in single-core test and in muli-core test it received 1858 points. As per the listing on Geekbench, the Galaxy J3 (2017) has 2GB RAM and Exynos 7570 SoC 1.45 GHz quad-core processor. The handset is based on the Android 7.0 Nougat operating system.

Meanwhile, as per the Wi-Fi certification, the Samsung Galaxy J3 (2017) will support 2.4GHz single-band Wi-Fi a/b/g/n and Wi-Fi Direct connectivity features. As per the listing, the Galaxy J3(2017) will run on Android Nougat operating system. It also revealed that the smartphone boasts the model number SM-J330F/DS with the certification ID WFA71276 and the date of certification was 14th April, 2017. The DS in the model name signifies a dual variant for the device.

According to some previous multiple listings, the smartphone comes with a 5 inch HD display with 720 x 1280 pixel resolution. It will be powered by a 1.5 GHz quad Core Qualcomm Snapdragon 425 processor along with Adreno 308 GPU and 2 GB of RAM. The Galaxy J3 (2017) has a 5-megapixel rear camera and a 2-megapixel front camera for photography. Besides, running on Android 6.0 Marshmallow/7.0 Nougat, the Galaxy smartphone comes with 16 GB of internal storage. For connectivity, the device is expected to come with basic connectivity features like 3G, WiFi, Bluetooth, GPS and Micro-USB port.