The Galaxy J3 2017 has a 5-megapixel rear camera and a 2-megapixel front camera for photography. 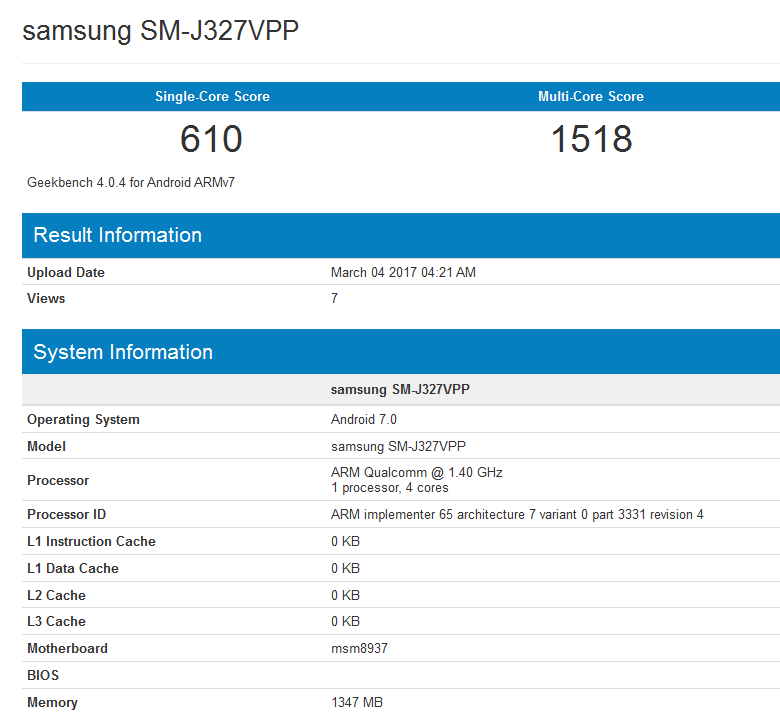 In the GeekBench listing, the Samsung Galaxy J3 (2017) got 610 points in single-core test and in muli-core test it received 1518 points. As per the listing on Geekbench, the Galaxy J3 (2017) has 1.5GB RAM and Qualcomm Snapdragon 430 GHz 1.4 GHz quad-core processor. The handset is based on the Android 7.0 Nougat operating system.

According to some previous multiple listings, the smartphone comes with a 5 inch HD display with 720 x 1280 pixel resolution. It will be powered by a 1.5 GHz quad Core Qualcomm Snapdragon 425 processor along with Adreno 308 GPU and 1.5 GB of RAM. The Galaxy J3 2017 has a 5-megapixel rear camera and a 2-megapixel front camera for photography. Besides, running on Android 6.0 Marshmallow, the Galaxy smartphone comes with 16 GB of internal storage. For connectivity, the device is expected to come with basic connectivity features like 3G, WiFi, Bluetooth, GPS and Micro-USB port.

As per the earlier Zauba listing the Samsung Galaxy J3 (2017) showed a screen size of 5-inch and a price tag of Rs 6,843. The listing further revealed that three units of Samsung SM-J327P were imported from South Korea to India for testing.