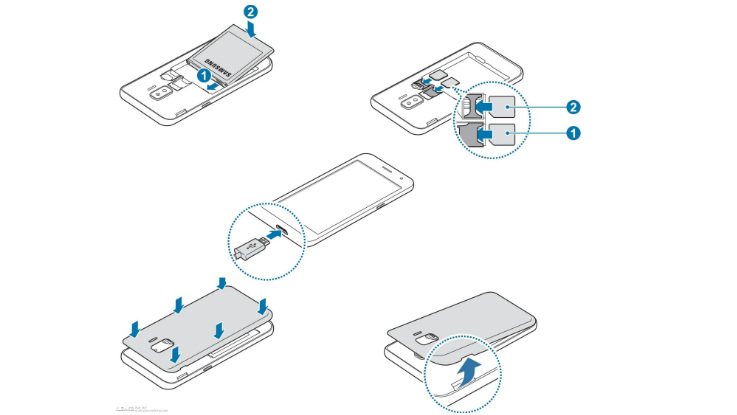 The Samsung Galaxy J2 Core is reported to equip a 5.0-inch Super AMOLED display and it will be powered by a 1.4GHz Exynos 7570 processor. As being part of Android Oreo (Go Edition) programme, one could expect it to feature 1GB of RAM and 16GB of internal storage.

Samsung is reportedly working on its first Android Oreo (Go Edition) smartphone, dubbed as Galaxy J2 Core. Now, the user manual of the upcoming device has been leaked online revealing some insightful information.

The user manual was first spotted by SlashLeaks and it reveals some key design information of the upcoming smartphone. For starters, the front of the phone will feature a small display and there will be an earpiece, ambient light sensor and a front-facing camera at the top, while at the base, there will be a micro USB port and a microphone.

The right side of the device bears a power on/off button, while the left house’s volume controls. The back of the phone features a single camera setup with LED flash at the top-centre position. The panel is removable and it reveals dual-SIM slot and a dedicated microSD card slot. Interestingly, the phone will come with a removable battery option as well. Further, there is no fingerprint sensor present in the user manual images, which means either the company will employ face recognition or it will simply add basic password settings for security.

Previously, a leak shed some light on the specifications of Galaxy J2 Core. As per the leak, the phone is equipped with a 5.0-inch Super AMOLED display and it will be powered by a 1.4GHz Exynos 7570 processor. As being part of Android Oreo (Go Edition) programme, one could expect it to feature 1GB of RAM and 16GB of internal storage.

For optics, there will be an 8-megapixel sensor on the rear, while for the front, there will be a 5-megapixel shooter. The phone is backed by a 2000mAh battery and runs on Android 8.1 Oreo. However, multiple reports also indicate that Samsung might add a layer of its Experience UI on top of the Android Oreo (Go Edition).