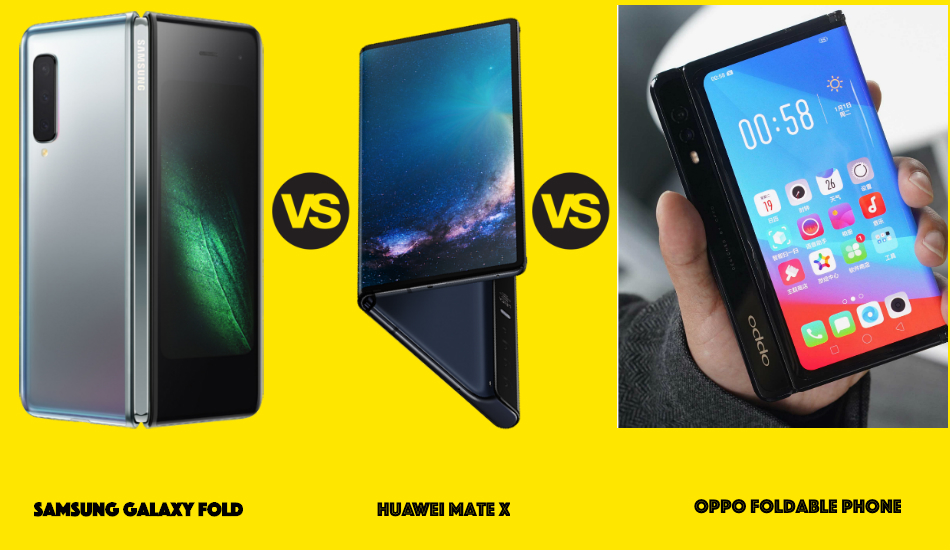 With three phones already showcased in some of their glory, let’s look at how these three smartphones compare when placed adjacent to each other. We’ll look at what all these devices pack on the inside, their multiple functionalities, use cases and how well the designs have been implemented for a folding smartphone.

The Mobile World Congress 2019 is up and running and it’s that time of the year when smartphone manufacturers reveal their plans for a new technology that they will release immediately or later on during the year. And one such piece of tech that we’re excited to look forward to is the first generation of foldable smartphones. It was Samsung which launched the Galaxy Fold last week and it was soon followed by Huawei unveiling the Mate X foldable smartphone on the first day of the MWC 2019 event in Spain. Within a day of that, Oppo VP Brian Shen disclosed the design of their foldable smartphone which bears a similar resemblance to its Huawei counterpart.

With three phones already showcased in some of their glory, let’s look at how these three smartphones compare when placed adjacent to each other. We’ll not only be looking at what all these devices pack on the inside, but also their multiple functionalities and use cases and also discuss which of these three implemented the best design for a folding smartphone.

How do they fold? 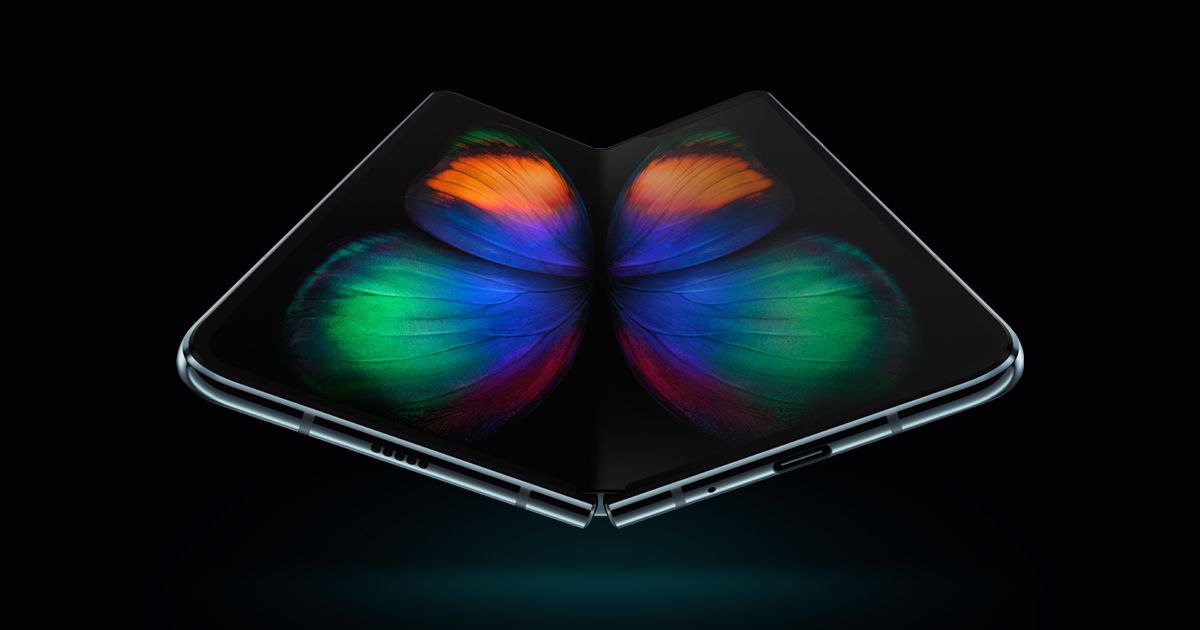 Huawei and Oppo’s foldable designs are similar to each other and that of Samsung Galaxy Fold is completely different. Speaking of the Galaxy Fold first, the device basically has two separate screens which act as a cover display and a tablet-sized larger display for multimedia utilities. The device has a fold on the inside, meaning when the tablet screen isn’t used, users can only interact with the cover display, leaving no part of the other display exposed. However, since the Galaxy Fold bends inward, it leaves some space at parts where it bends and doesn’t stay flat and parallel when left on a table.

When it comes to the Oppo’s or Huawei’s foldable phones, there’s no presence of a separate display, meaning a part of the folded out screen is what you interact with when using the smartphones in their small-sized profile. The single display that you interact within its folded position is what you’ll be using when the screen is unfolded. The outward folding mechanism also makes the Mate X (and Oppo’s) symmetrical when folded, leaving no gap between the folded portions of the phone and thus laying flat on a surface with no awkward bulges. 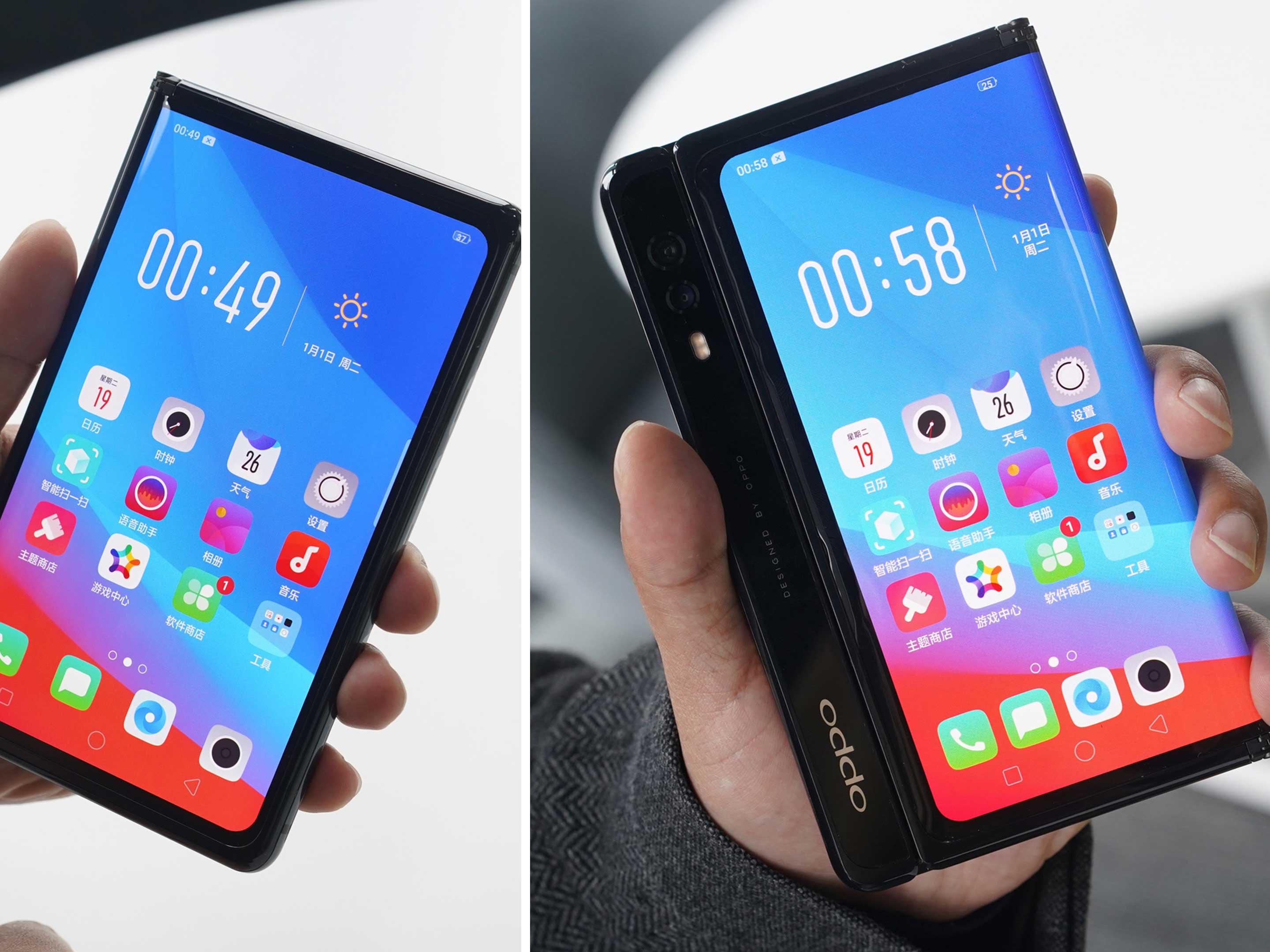 Pictures of Oppo’s foldable smartphone were revealed by the company VP yesterday but the Oppo neither showcased their device as Huawei did with the Mate X while launching at the MWC nor did it put up any video or a demonstration of their foldable smartphone like Samsung did with its Galaxy Fold. This goes to show that while there’s concrete news that the Fold and Mate X will be commercially made available in the summer, Oppo hasn’t yet launched their foldable smartphone and has not even given a name to it.

Winner: For the best implementation of the folded screen yet and for actually demonstrating it at the MWC 2019 – Huawei.

Display or should we say displays? 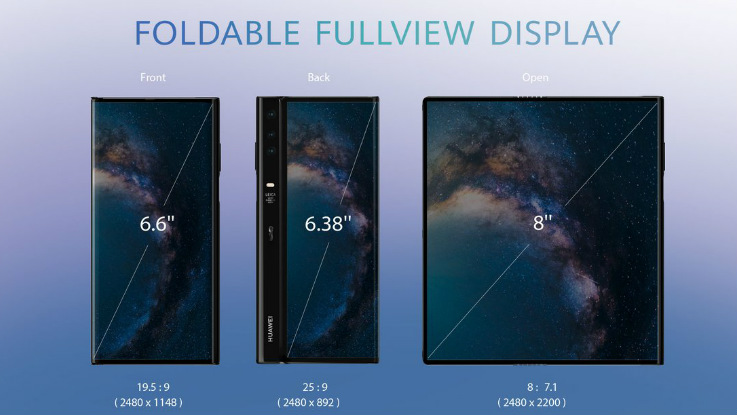 The Huawei Mate X features an 8-inch OLED screen when it is opened with a resolution of 2480 x 2200 pixels and is the largest of the three in terms of pure screen real estate. When folded, the smartphone has a 6.38-inch screen at the back and a 6.6-inch display on the front with resolutions of 2480 x 892 pixels and 2480 x 1148 pixels respectively on either side.

The Mate X and the Oppo foldable phone has been designed in such a way that the primary display that you interact with, be it on folded more or unfolded mode, both feature bezel-less display. the only unsymmetrical part is present on the rear side which houses the camera module and the USB-C port. This bar on the right edge resembles that of the thick bar which is present on Kindle Oasis and might as well make the phones easier on the hands when unfolded.

The Galaxy Fold, on the other hand, has two screens. There’s a 4.6-inch HD+ Super AMOLED (21:9) cover display on the front and a 7.3-inch QXGA+ Dynamic AMOLED tablet screen with 4.2:3 aspect ratio when the phone is unfolded. However, unlike that of the Huawei and Oppo phones, the Fold comes with large bezels when using the cover display and a large notch on the tablet display which is positioned rather awkwardly on the top right part of the screen. This notch features the selfie camera when using the phone as a tablet but it’s to date the most ugly-looking notch on a smartphone. The notch doesn’t make sense when you think Samsung has been promoting punch holes instead of notches for maximising screen space.

Don’t expect protection from any of these smartphones yet as we haven’t reached that point in the technology when glass folds as well as keeps your display durable.

What powers these foldable phones?

When launching the Galaxy Fold, Samsung didn’t exactly reveal which processor was present on the inside of the device but simply said it’s powered by a 7nm processor. The unnamed 7nm processor could well be the Qualcomm Snapdragon 855 and will be coupled with up to 12GB of RAM and 512GB of storage. The Fold will be sold in 4G and 5G models.

The Huawei Mate X, on the other hand, is powered by a Kirin 980 processor coupled with ARM Mali-G76MP10 GPU, 8GB of RAM and 512GB of internal storage. It will also equip a Balong 5000 chip which will be capable of delivering up to 6.5Gbps download and 3.5Gbps upload speed.

Both the aforementioned phones run on the latest Android 9.0 Pie interface with their own custom skin on top. The device also equips a fingerprint scanner on the edges which is embedded on the power button.

We haven’t come to terms with what Oppo’s foldable smartphone will feature on the inside but considering Oppo will want to compete with its Chinese competitor, the device could be made a cheaper affair and might not feature a top-of-the-line chipset as a means for cost cutting. 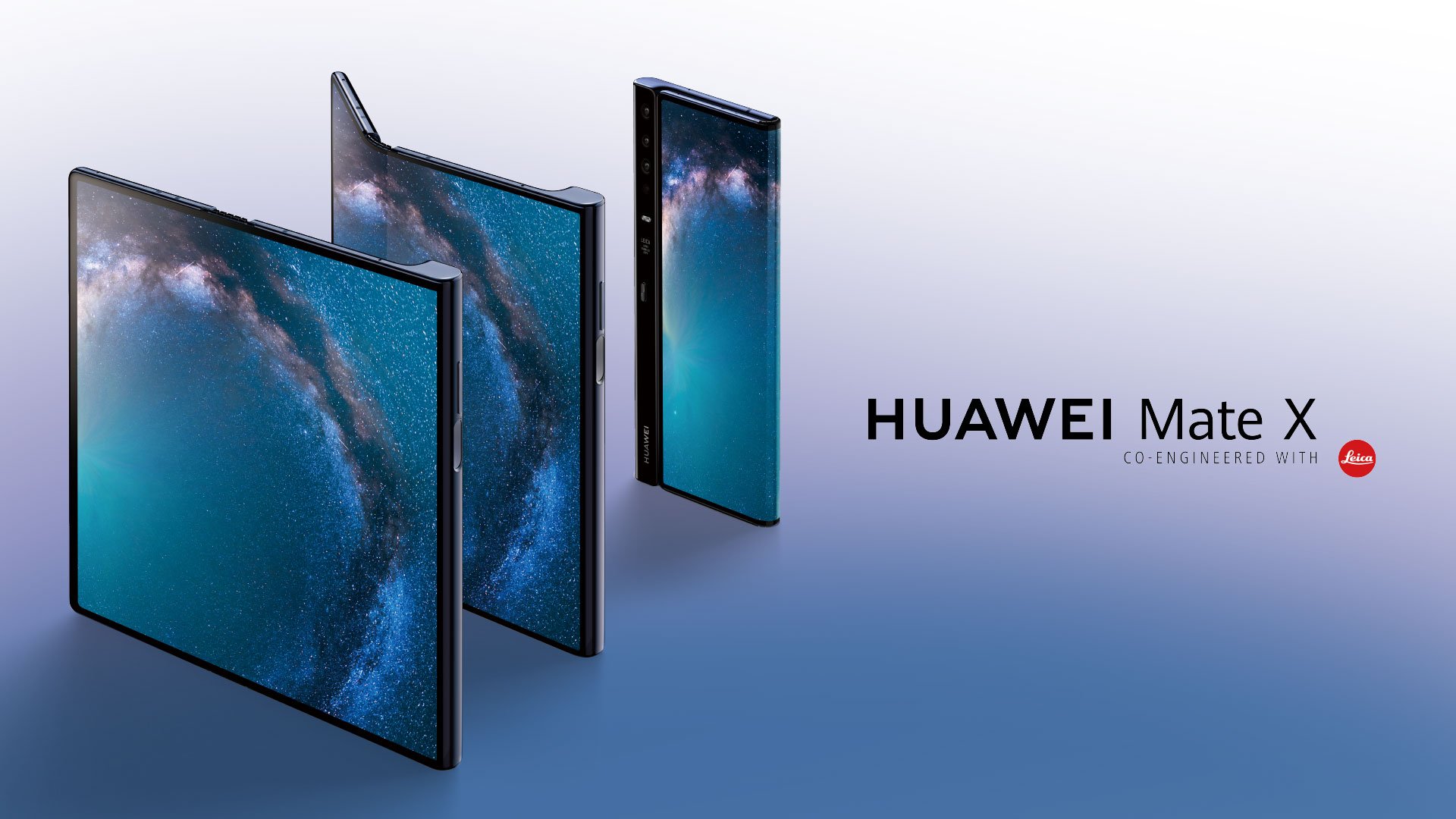 For optics, the Mate X has a two-in-one front and rear camera setup, which is powered by Leica. There are three sensors with primary being a 40-megapixel wide-angle lens, a 16-megapixel ultra-wide-angle lens and an 8-megapixel telephoto lens. There is a phone mirror feature, which displays the preview of what they are capturing. This kind of implementation also helps the selfie-centric customers as they’ll be using the same set of primary lenses as the front-facing camera unit.

Unlike that of the Huawei Mate X, the Oppo phone only features two cameras at the back with dual-LED flash below the module. Oppo has inscribed its logo and the ‘Designed by Oppo’ tag at the bottom of the camera bar as well. The primary cameras can also be used for selfies as on the Mate X since there’ll be a display adjacent to the camera unit which can be used a viewfinder for the camera.

The Galaxy Fold has a total of six cameras onboard. Primary setup includes a triple camera module at the back of the phone which combos a 12MP lens with a variable aperture (with OIS), a 12MP telephoto lens (with OIS) and a 16MP ultra-wide angle camera. There’s a single 10MP selfie camera at the top of the cover display while there’s a dual camera 10MP + depth sensor setup at the top of the tablet display.

Samsung has crammed in six cameras to aid its design while Huawei only needed three with the Mate X. Picture-wise we expect both the phones to take good pictures with clear details and dynamic range.

There are two batteries on the inside of the two foldable slabs of the Galaxy Fold which amount to a total of 4,380mAh. Samsung says the device will be able to offer to charge to other phones wirelessly via PowerShare technology. Users can also plug in to charge the Galaxy Fold and put another device on top to wirelessly charge it.

The Huawei Mate X, in this case, is powered by a slightly larger 4,500mAh battery but that’s aided with a 55W Huawei SuperCharge adapter which the company says will charge the device from zero to 85 percent in 30 minutes. Considering most people, the faster charging is more appreciated than sharing power wirelessly.

We still need to know more about the hardware of the phone to know how much power the Oppo smartphone packs.

The Samsung Galaxy Fold and Huawei Mate X foldable smartphones sure do sound exciting but there are a lot of things one should consider before committing to the next generation of foldable smartphones. While Samsung has been known for better-polished smartphones, the Mate X from Huawei in this department looks to have taken a better implementation of the foldable design. As for Oppo, we can expect its smartphone to be a cheaper take on the Mate X and one that pushes down the affordability of this technology.