Samsung Galaxy A80 listed on Samsung India website, things you should know 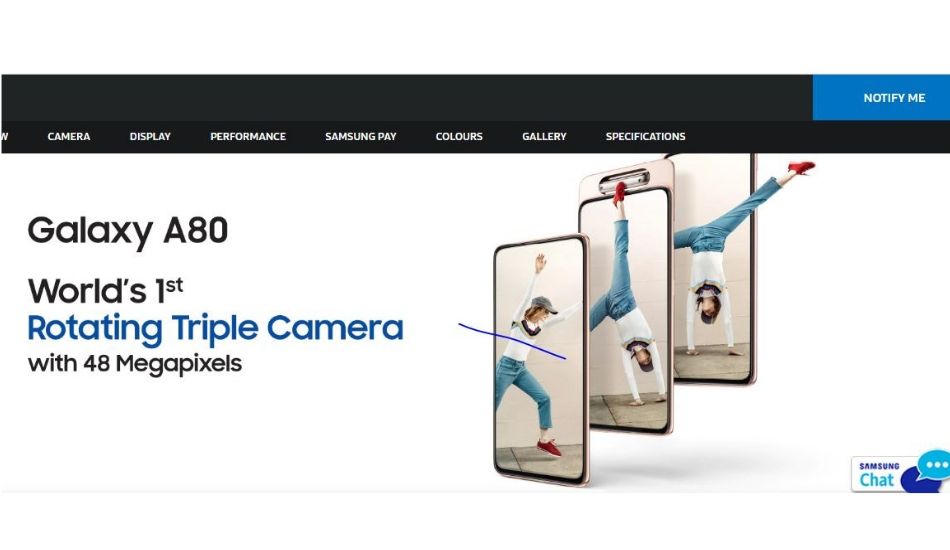 The smartphone is reportedly expected to launch on June 15th in India. However, as of now no exact launch date has been revealed by the company.

Recently, we have reported that Samsung Galaxy A80 smartphone pre-booking will kick start in the 1st week of June and will be priced around Rs 45,000. Now the phone has been found listed on the Samsung India website with the ‘Notify Me’ option. The smartphone is reportedly expected to launch on June 15th in India. However, as of now no exact launch date has been revealed by the company.

Samsung had launched Galaxy A80 and Galaxy A70 for the international market in April and Galaxy A70 has been already made available in Indian markets in the month of May.

As the phone had been made official internationally earlier, we are now familiar with all the features and specifications of Galaxy A80 and now even Samsung India website also listed all specifications on Galaxy A80’s product page.

Samsung Galaxy A80 has a 6.7-inch Super AMOLED (1,080 x 2,400 pixels) Infinity display and comes armed by an Octa-core Snapdragon 730G processor which has two cores clocked at 2.2GHz and six cores clocked at 1.8GHz along with an Adreno 618 GPU. It comes with 8GB of RAM along with 128GB of internal storage.

The USP of this phone is its camera module, as it has a rotating pop-up camera (for both rear and front) which is spring loaded to face depending upon your need. The camera has 48-megapixel as a primary sensor with f/2.0 aperture, an 8-megapixel ultra-wide angle camera with a 123-degree field of view and a 3D TOF depth sensor for Live Focus.

Galaxy A80 features an in-display fingerprint scanner and has a bezel-less display. It gets its juices from a 3700mAh battery with 25W Super Fast Charging support and runs on Android 9 Pie with Samsung’s One UI out of the box. On the connectivity front, the phone has VoLTE, Dual SIM, USB Type C port, Bluetooth 5.0 and other standard options. The Galaxy A80 comes in Ghost White, Angel Gold and Phantom Black colour options.