Both of them comes in Black, Orchid Grey, Gold and Blue colour options.

Samsung has finally taken the wrap off from the 2018 editions of its Galaxy A series. Dubbed as Galaxy A8 (2018) and Galaxy A8+ (2018), both the smartphones will be available in early January 2018 and both of them comes in Black, Orchid Grey, Gold and Blue colour options.

The smartphones are the first from Samsung’s camp to feature dual-selfie cameras. Both of them bears a 16-megapixel primary camera and an 8-megapixel secondary sensor with the same aperture of f/1.9. The dual cameras are used to create from clear portrait shots to close-ups with background blur. Then there is Live Focus feature that adjusts the bokeh effect before or after you take the picture. One can also add stickers to a selfie as well. For the rear, there is a 16-megapixel sensor with aperture f/1.7 and LED flash.

The smartphones also come with the Infinity Display which is present in company’s flagship lineup. The Galaxy A8 (2018) features a 5.6-inch Full HD+ Super AMOLED display, while the Galaxy A8+ (2018) comes loaded with 6.0-inch Full HD+ Super AMOLED display with both sporting a screen resolution of 2220 x 1080 pixels. Both the smartphone also comes with Always On Display feature as well. 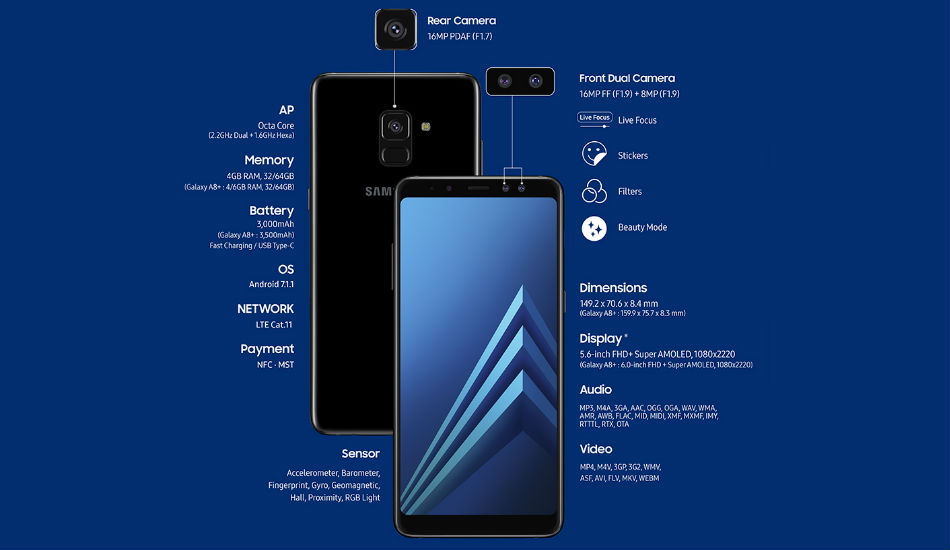 Both of them support Magnetic Secure Transmission (MST) and Near Field Communication (NFC) and are equipped with Samsung Pay. The fingerprint sensor is located at the back panel just beneath the primary camera. Further, both the phones are the first in A series to support Samsung Gear VR.