Samsung Galaxy A8 (2016) with Android 7.0 Nougat spotted on GFXBench

The SamsungGalaxy A8 (2016) smartphone running Android 6.0 Marshmallow was made official late last year. Now the said smartphone with model number SM-A810 has been spotted on GFXBench benchmarking website with Android 7.0 Nougat operating system. This simply implies that the company is, perhaps, testing the latest software and may release the Nougat update for the device soon. Sadly, there’s currently no information on exactly when the update will be rolled out. 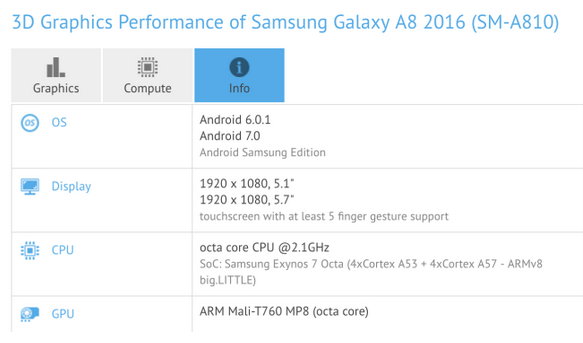 The Galaxy A8 (2016) comes with slim and flush metal uni-body design. Up front, there is a 5.7 inch 1080p AMOLED display. Underneath the hood, the device is powered by Samsung’s own Octa-Core Exynos 7420 chipset of which four are Cortex-A53 and four are Cortex-A57. All the cores are built on 14nm process.

In the camera department, Galaxy A8 (2016) sports a 16-megapixel primary camera and an 8-megapixel front-facing camera. Though there haven’t been any details about the sensors and aperture etc. but reports suggests that it is likely to have the same sensor which is there in Samsung Galaxy S6. The handset runs on Android 6.0.1 Marshmallow out of the box with Grace UI on top. The front home button features a fingerprint scanner and there is also an Always On Display feature. It has a 3300 mAh battery which Samsung claims can last a day easily.