The Samsung Galaxy A70s is said to use 64MP ISOCELL Bright GW1 sensor.

Samsung Galaxy A70s with 64MP rear camera will be launching in India this month. Now ahead of the launch, the support page for Galaxy A70s has gone live on Samsung India’s website.

Samsung Galaxy A70s with model number SM-A707F/DSM is now listed on the Samsung India support website. Also, the DS in the model number hints towards the support for dual-SIM. 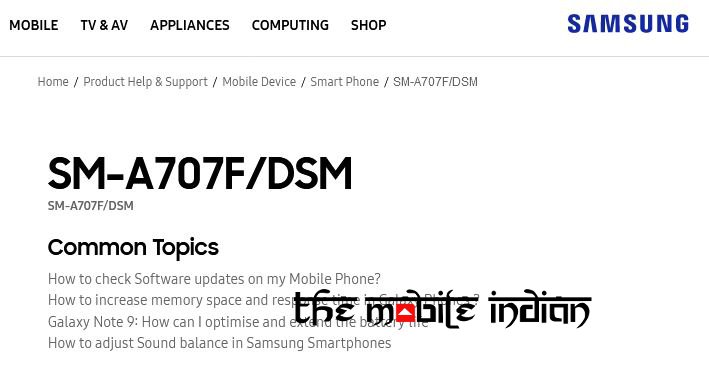 The support page, however, does not actually reveal anything new about the Galaxy A70s but it does suggest that the smartphone will soon be launched in India.

The earlier GeekBench listing of Samsung Galaxy A70s revealed that the smartphone will come equipped with Qualcomm Snapdragon 675 coupled with 6GB of RAM and Android 9 Pie operating system. The Galaxy A70s registered 2365 on single-core tests while scoring 6372 in multi-core tests.

The phone also received Wi-Fi Alliance certification as per which the smartphone will have dual Wi-Fi band capabilities and support for 802.11 ac standard.

The Galaxy A70s is said to use 64MP ISOCELL Bright GW1 sensor. The GW1 sensor will come in a size of 1/1.72-inch, meaning it will be bigger than the 1/2-inch sensor present on 48MP cameras. Samsung introduced the ISOCELL Bright GW1 as the world’s first 64-megapixel sensor for smartphones back in May. The sensor will offer the highest resolution than any smartphone camera with a pixel size of 0.8 microns which is being used on the current line of 48MP sensors.