Samsung Galaxy A4+ gets benchmarked with Android Pie, 4GB RAM

Samsung Galaxy M series is all set to launch in India on January 28 while the Samsung Galaxy S10 series will be launched on February 20 in San Francisco.

A listing on Geekbench which was first spotted by Android Soul shows a Samsung device with model number SM-A405FN. As per the listing, the Samsung phone will run Pie out of the box. 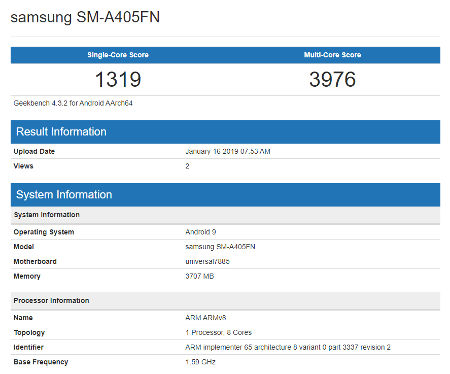 The listing further reveals that the phone will be powered by  Samsung-made Exynos 7885 processor coupled with 4GB of RAM. The phone has scored 1319 and 3976 in the single core and multi core test respectively in the GeekBench listing.

As of now, nothing much is known for the Samsung Galaxy A4+ smartphone. But since the phone has now appeared online, we can expect the phone to surface in more leaks ahead.

Meanwhile, Samsung is getting ready to launch Galaxy M-Series in India on January 28. As per reports, Samsung will first be launching the Galaxy M10 and M20 phones first and Galaxy M30 will be announced later.

The Samsung Galaxy M10 will feature a 6.5-inch display, Exynos 7870 SoC, coupled with 3GB of RAM with 16GB/32GB of internal storage, Android 8.1 Oreo and 3,400mAh lithium-ion battery. Galaxy M20 will feature 6.13 inches display, Exynos 7885 chipset, dual cameras on the back with a 13MP primary sensor and 5MP depth sensor. It will feature an 8MP front-facing camera. The phone will have 3GB of RAM and 32GB or 64GB of internal storage. It will run on an older Android 8.1 Oreo operating system and will be powered by 5000mAh battery.

Samsung Galaxy M-series to launch in India on January 28