Samsung's upcoming smartphone under the A series, called the Galaxy A22 hasn't been launched in India but we may have a price for the same ahead of the official announcement. 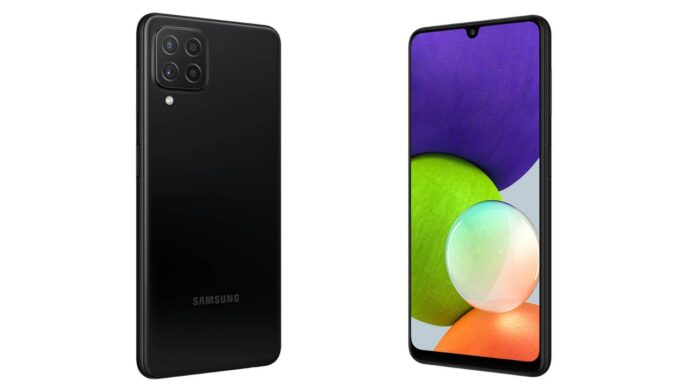 Samsung’s Galaxy A22 launched in Europe in early June, and it has been leaked before that Samsung will be announcing the Indian availability of the same. But it seems like the Galaxy A22 4G is priced at Rs18,499 and has already gone on sale in the region without an official announcement via offline retail stores.

As reported by 91Mobiles first, buyers should be able to take advantage of Samsung Care offers. These offers include free home delivery, Samsung Finance+, and Samsung Care+. However, there’s no official confirmation regarding these offers. The poster for the offline sale also reveals that the phone is available in black, green, and purple colours to choose from.

There is no official information from Samsung regarding when the device will be available on online platforms.

Samsung Galaxy A22 4G features a 6.4-inches HD+ Super AMOLED Infinity-U display with a 90Hz refresh rate. The phone is powered by an octa-core MediaTek Helio G80 with up to 950MHz ARM Mali-G52 GPU.

The phone comes with 6GB of RAM with 128GB onboard storage, which is non-profit expandable. There’s a side-mounted fingerprint reader as well for security.

On the camera front, the phone has quad cameras at the back. The cameras consist of a combination of a 48-megapixel primary sensor, an 8-megapixel wide-angle sensor, and two additional 2-megapixel sensors for macro and depth sensing. In addition, there is a 13-megapixel selfie camera at the front with an f/2.2 aperture.

Samsung Galaxy A22 4G is fuelled by a 5000mAh non-removable battery with 15W fast charging technology. It runs Android 11 with One UI 3. For connectivity, you get USB-C, Bluetooth, 4G LTE, Wi-Fi, GPS and a 3.5mm headphone jack.