Samsung Galaxy A10e comes with Android 9.0 Pie out-of-the-box and has 2GB of RAM.

Samsung is working on a new A series smartphone which will be named as Galaxy A10e. Now the smartphone has appeared on the Geekbench benchmarking website, revealing some of its key specifications.

The Samsung Galaxy A10e is listed on Geekbench with the model number SM-A102U. As per the GeekBench listing, Samsung Galaxy A10e comes with Android 9.0 Pie out-of-the-box and has 2GB of RAM. It will be powered by an octa-core Samsung’s Exynos Exynos 7884 SoC. The phone has scored 1163 points in the single-core test while in the multi-core test, the phone has received 3581 points. 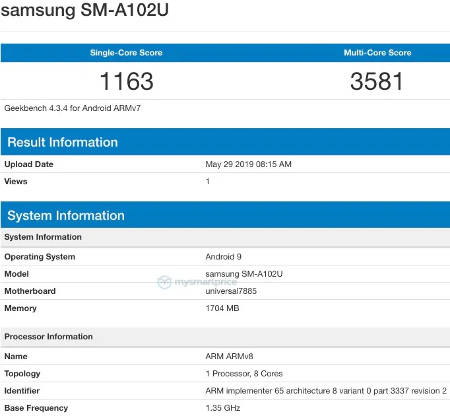 As per the earlier Wi-Fi listing, the Galaxy A10e will support dual-band Wi-Fi a/b/g/n (2.4GHz, 5GHz) and LTE capabilities. It will also have all five key Wi-Fi certificates a/b/g/n/ac. The device will run on the latest Android 9.0 Pie operating system based One UI. The Bluetooth listing confirmed support for the Bluetooth 5.0 Low Energy standard.