Samsung Galaxy A04s high-resolution renders have ben leaked. They suggest a flat display with a waterdrop notch at the center. 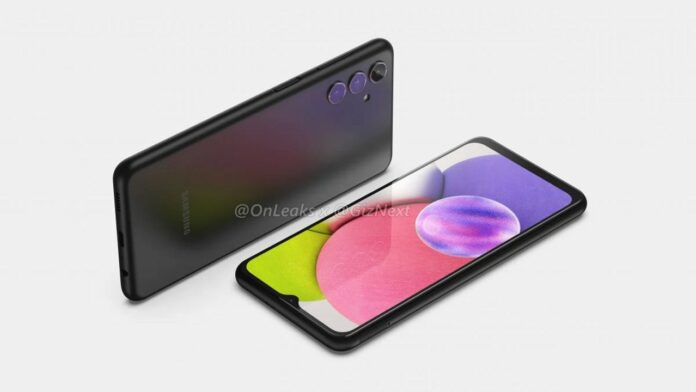 Well-known tipster Steve Hemmerstoffer, aka Onleaks with GizNext has shared high-resolution renders of the upcoming Samsung Galaxy A04s. As per the renders, the phone will feature a flat display with a waterdrop notch at the center. The leak reveals that the device is equipped with a 6.5-inch display.

The device has its volume controls and power button on the right side. The latter doubles up as a fingerprint scanner. The bottom edge features a speaker grille, a microphone hole, a USB Type-C port, and a 3.5mm headphone jack. The leak states that the Galaxy A04s measure 164.15 x 76.5 x 9.18mm.

Samsung Galaxy A03s packs an octa-core Mediatek Helio P35 MT6765 It has up to 4GB RAM and up to 64GB onboard storage. The storage is expandable via a microSD card by up to 1TB.

For photos and videos, the phone comes with a triple rear camera setup. It has a 13MP primary sensor, a 2MP macro, and a 2MP depth sensor on the rear. For selfies, the smartphone has a 5MP front-facing shooter.

As for software, the handset runs on One UI 3.1 based on Android 11 out of the box. There’s also a 5,000mAh battery with support for15W fast charging.