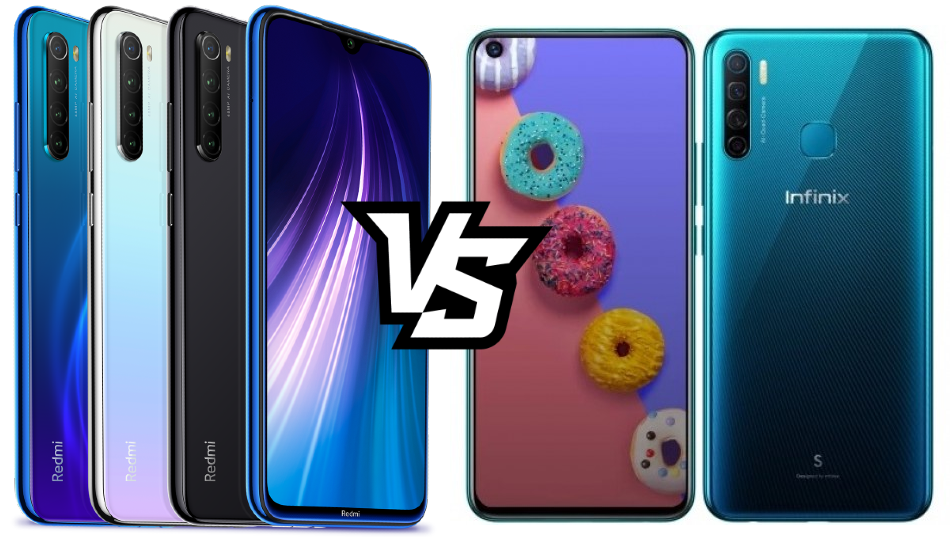 For under Rs 10K, Redmi and Infinix are selling the Redmi Note 8 and Infinix S5 in India. Which one of these two get you the most for your money?

For around the same price, Infinix announced the Infinix S5 in India for Rs 8,999. Will the Redmi Note 8 survive with no hiccups from its budget counterpart from Infinix? Let’s find out.

Redmi Note 8 features a 6.39-inch FHD+ display with a resolution of 2340 x 1080 pixels, 450 nit brightness and 90.5 screen-to body-ratio. It additionally comes loaded with Corning Gorilla Glass 5 protection at the back and front and is P2i splash resistant to repel accidental spills and light rains. 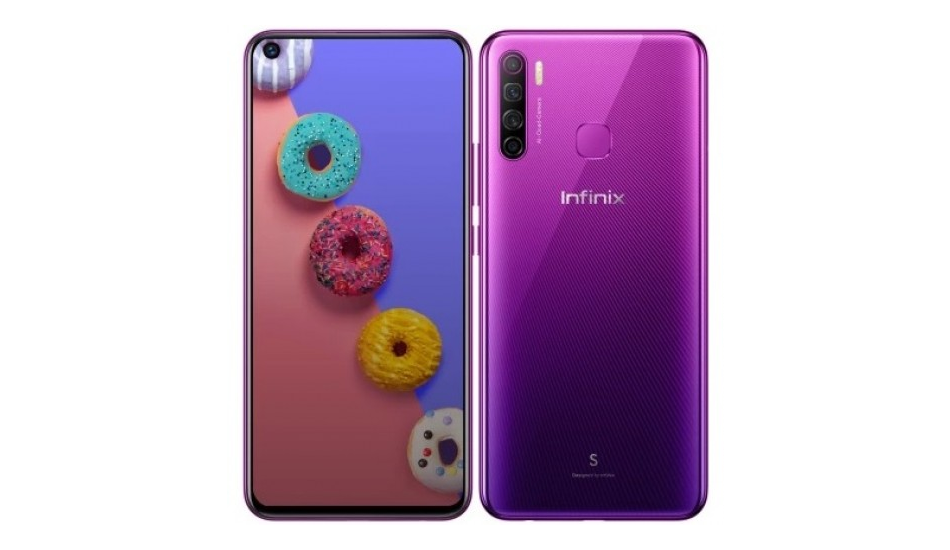 While the Infinix S5 offers a slightly larger screen size, the Redmi Note 8 offers better resolution at 1080p. Both devices have the same screen-to-body ratio of 90.5 percent but for some, the punch hole camera on the Inifinix would be attractive. However, the Redmi Note 8 scores the brownie points for screen protection and quality.

Infinix S5 is powered by a 2.0GHz octa-core Mediatek Helio P22 (12nm) processor with 4GB of RAM and 64GB of internal storage. The phone offers an option to expand the storage up to 256GB via microSD card. 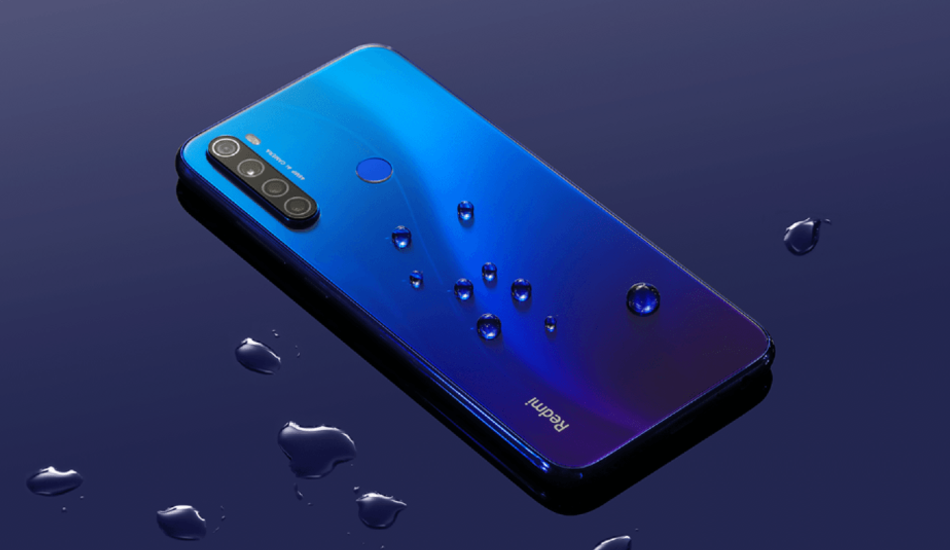 Redmi Note 8 is powered by Snapdragon 665 11nm processor coupled with Adreno 610 GPU, 4GB/6GB RAM and 64GB/128GB storage options. The storage can be expanded by up to 512GB via MicroSD card.

While both Helio P22 and Snapdragon 665 share the same peak frequency of 2.0GHz, it’s the Snapdragon 665 which scores ahead of its competition since it is based on an 11nm process node. The 11nm architecture is newer compared to the 12nm based chipset on the Infinix and thus, the Redmi Note 8 will be able to perform tasks faster with lesser power consumption. Additionally, the Redmi also offers an option to purchase a model with a higher RAM and storage which is always welcome and the device also supports a larger sized expanded storage.

The Redmi Note 8 packs a quad-camera setup at the back comprising of a 48MP primary Samsung ISOCELL GM2 sensor with f/1.79 aperture, PDAF, EIS; an 8-megapixels 120 degree super wide-angle lens with 1.12 μm; a 2-megapixel macro lens with 1.75μm pixel size, f/2.4 aperture; and a 2-megapixels depth sensor. On the front, there’s a 13-megapixel selfie camera with AI beauty and f/2.0 aperture.

Infinix S5 comes loaded with an AI Quad rear camera setup with 16-megapixels as the primary sensor, a 5MP Wide lens, Super macro lens and Depth sensor along with Quad-LED flash. It has a 32-megapixel AI in-display selfie sensor on the front with Big Pixel technology (4-in-1 pixels) and f/2.0 large aperture. 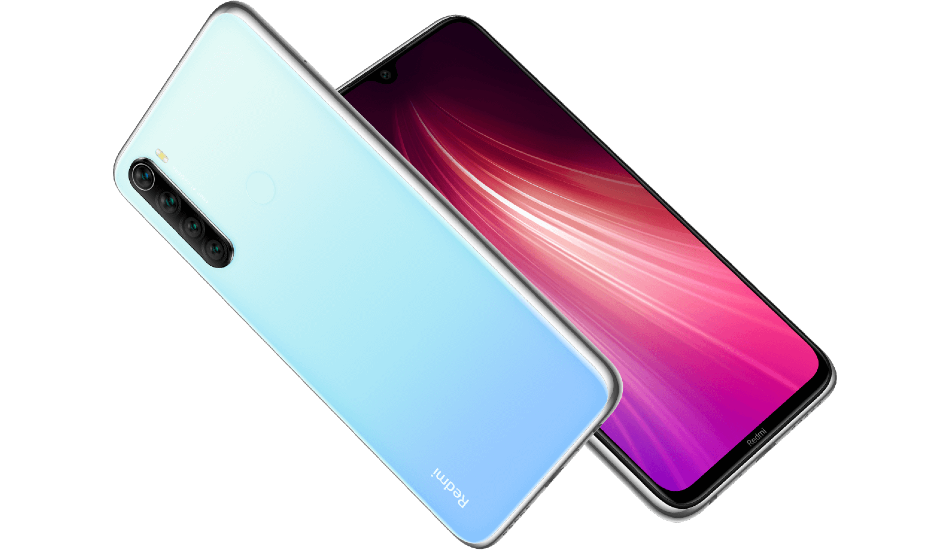 The main camera on the Redmi Note 8 offers more detailed pictures thanks to its 48MP sensor while Infinix S5’s largest sensor is just 16-megapixels. While both phones offer a wide-angle lens, the Redmi phone has a larger 8MP sensor compared to 5MP on the Infinix device. Note 8 additionally packs a 2MP macro lens at the back for capturing small subjects in detail. The Infinix S5 simply lacks that.

Considering Xiaomi’s history, the Redmi Note 8 is more likely to get further updates in the future, especially MIUI 11 and Android 10.

The Redmi Note 8 is fuelled by a 4000mAh battery with 18W fast charge support. The company promises up to two days of battery on a single charge, though real-life usage needs to be tested.

The Infinix S5 also gets the power from a 4000mAh battery. The company promises that the phone will be able to last to up to 32 hours on Music Playback (Speakers), 111 hours of Music via Headset, 14.7 hours on Video Playback, 13.4 hours on Web Surfing, 11 hours on Gaming, 18.8 hours 4G talk-time and 31 days on Standby time.

While there is nothing to differentiate between the battery specs, it’s Redmi Note 8 which edges past the Infinix S5 for featuring a USB Type-C port for data transfer and charging.

The Redmi Note 8 is a worthy upgrade over its predecessor and only brings more significance to Redmi’s Note series. For a starting price of Rs 9,999, the Redmi Note 8 packs mid-range performance through the Snapdragon 665, a 48MP quad-camera setup with macro photography capabilities, a Full HD+ display, a USB-C port for reliable charging and promised updates shortly. While Infinix S5 promises many things including a moderate performance through an Helio P22, triple cameras and a punch-hole display, it’s still a mile or two behind what Xiaomi is offering with its budget phone.