Redmi Note 8 Pro vs Realme XT Camera Comparison: Which one has an upper hand? 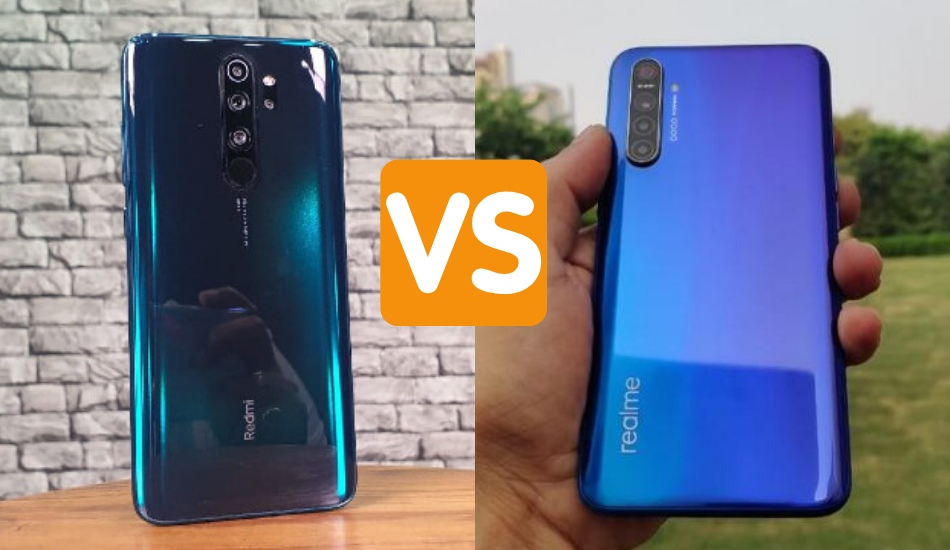 So, which one has better cameras? Let’s find out in this camera comparison.

Xiaomi recently introduced its latest smartphone in the Redmi Note series that is also the first to feature a 64-megapixel quad-rear camera setup. Yes, we are talking about the Redmi Note 8 Pro.

Let’s refresh the camera specifications of both smartphones. To start with Redmi Note 8 Pro, it is loaded with a quad-camera setup at the rear panel with a 64-megapixel Samsung Bright GW1 ISOCELL sensor, an 8-megapixel Ultra Wide lens, 2-megapixel depth sensor and another 2-megapixel macro lens. For the front, the phone has a 20-megapixel selfie camera that supports AI beauty.

The Realme XT is also backed by a quad-camera setup with similar camera specifications. You get a 64-megapixel Samsung ISOCELL Bright GW1 sensor with an f/1.8 aperture and electronic stabilisation, an 8-megapixel wide-angle camera, a 2-megapixel macro camera, and a 2-megapixel depth sensor for portraits. For the front, it has a 16-megapixel sensor for selfies and video calls. So, let’s start with the camera comparison of both the devices 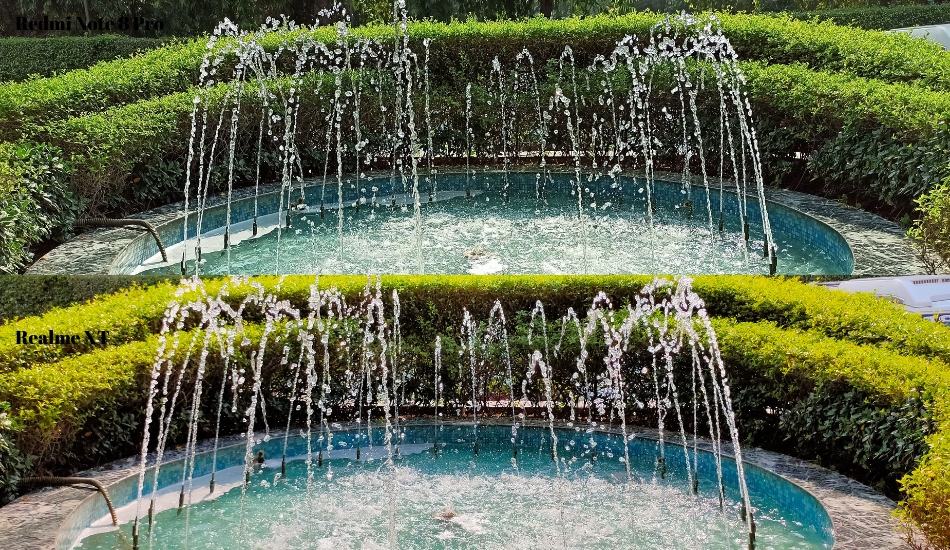 Coming to the first photo, we clicked was of a fountain. As you can clearly see both the smartphones are showing different colour temperature. On one side, the Redmi Note 8 Pro is showing some natural colours, on the other hand, you can see slightly oversaturated colours on the Realme XT. Apart from this, both the smartphone delivers some good results when it comes to contrast and detailing. 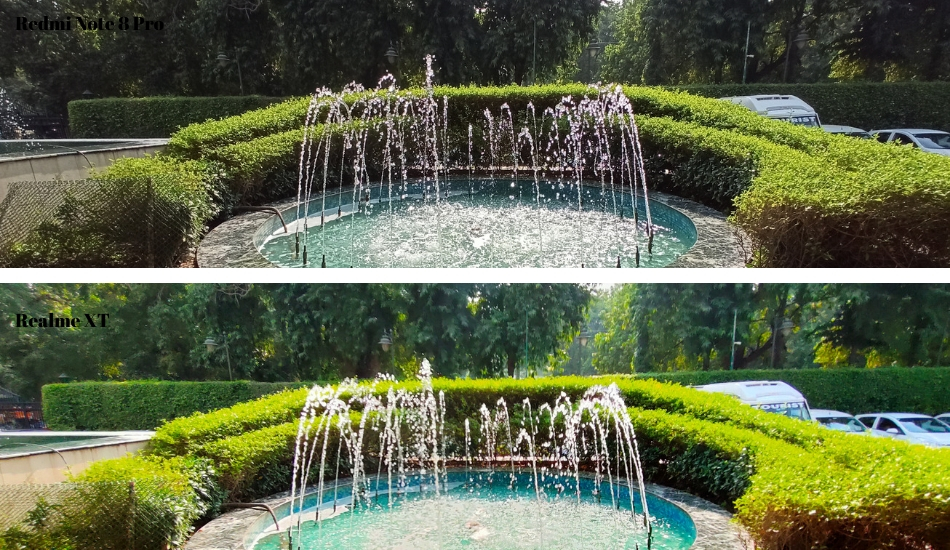 Coming to the wide-angle mode, both the smartphones are able to capture a wider view. Starting with the Redmi Note 8 Pro, the photo looks a bit dull, whereas in Realme XT you get better contrast and colours pops out decently. Furthermore, the Redmi Note 8 Pro is overexposing the sky, while the Realme XT is able to maintain the sky colour, which is a plus point. So, in this mode, Realme XT wins this round. 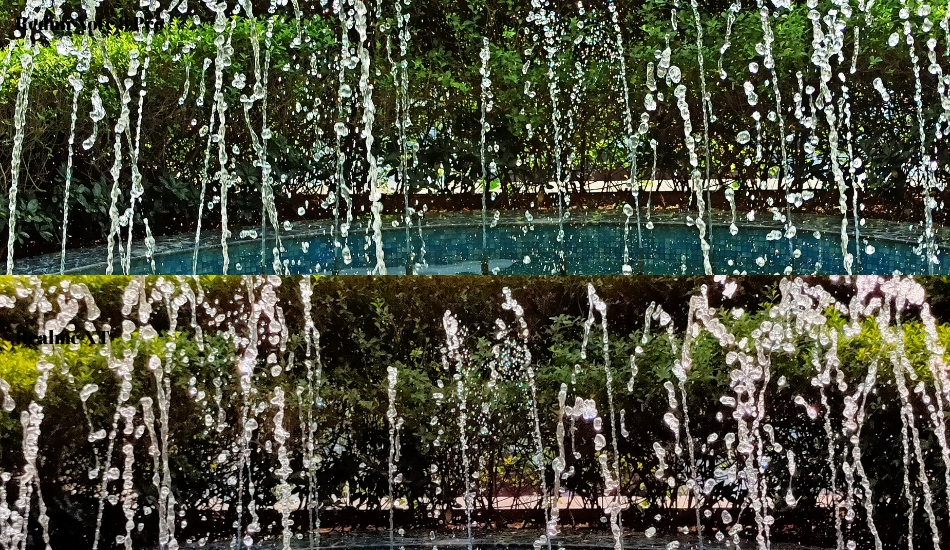 In this mode, both the phones once again does a decent job when it comes to the detailing. The photo from the devices came out to be good, however, we noticed a slightly different colour temperature. The photo clicked with Redmi Note 8 Pro delivered cooler colour temperature, while the Realme XT showed warmer colours. Once again, we noticed that Realme XT was over saturating the green colour. 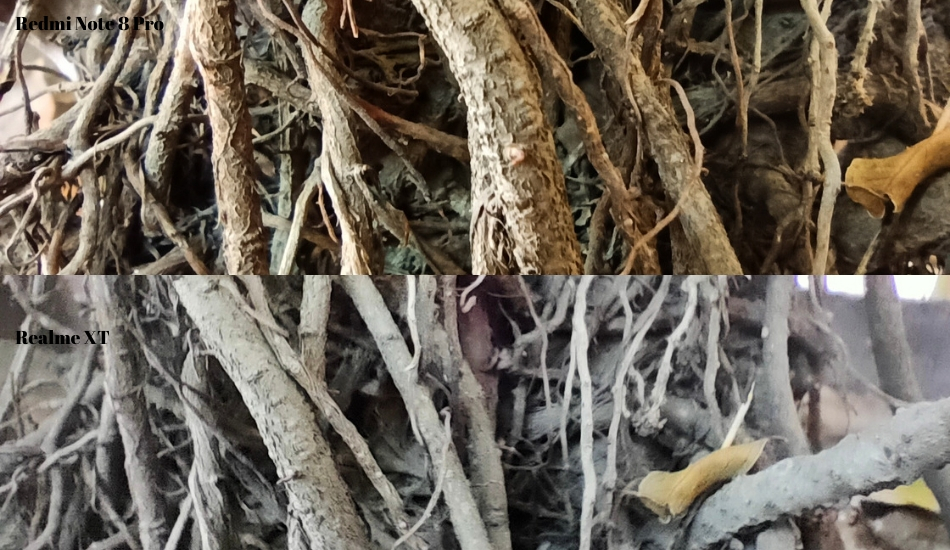 The macro shot taken from both the phones were totally different. The shot taken from Redmi Note 8 Pro came to be better as it was able to retain the details of the trunk of this plant, while the Realme XT was not able to capture such details. Furthermore, we noticed that Realme XT was not able to capture the right colour tone, which visible with the naked eye. 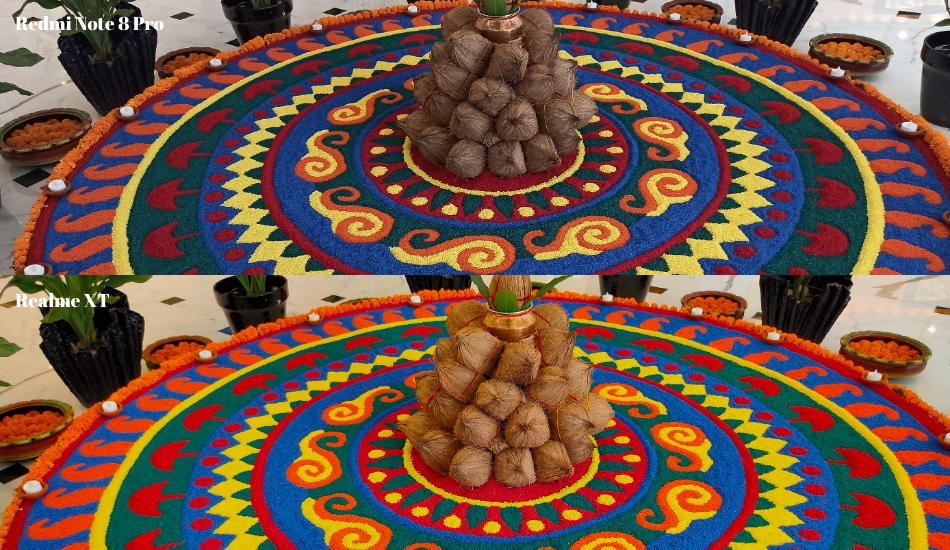 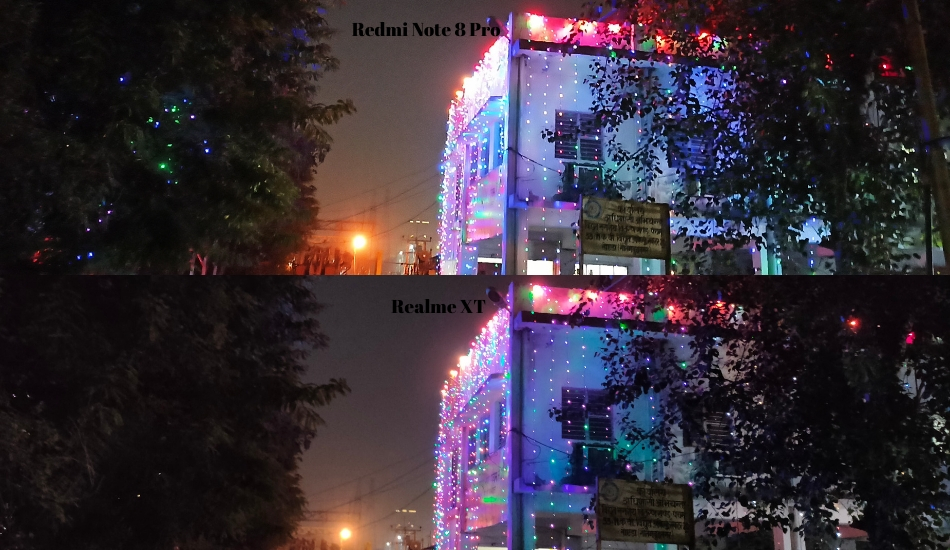 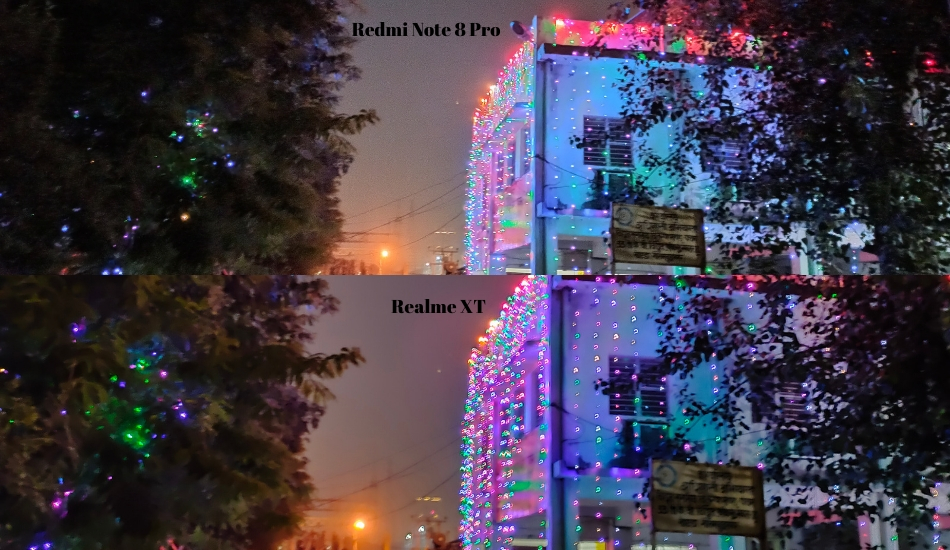 However, in Night Mode things change drastically. The Realme XT is able to capture better photos with Night Mode on. The photo taken from Realme XT came out to be better as one can see the tree in the foreground, which came out to be dark with Redmi Note 8 Pro. 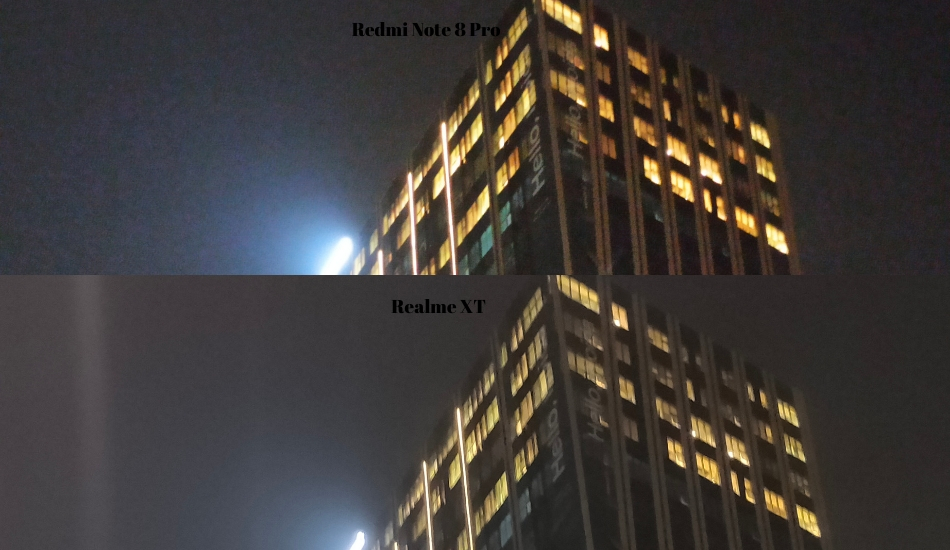 In telephoto mode, the Redmi Note 8 Pro once again does a better job as it is able to capture more details as compared to the Realme XT. However, both the phones were not able to capture the true essence of the photo. Both the photos came out to be quite grainy in nature and noises were prominently visible. 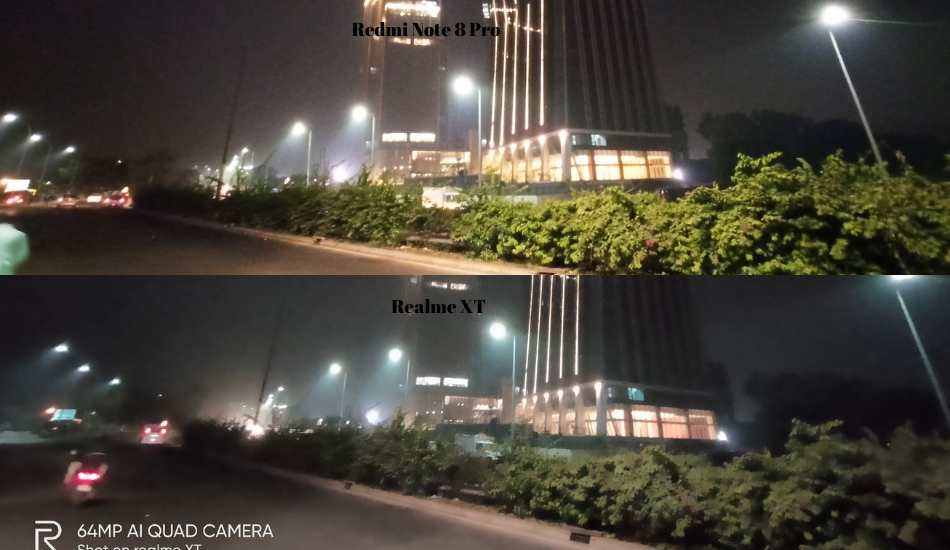 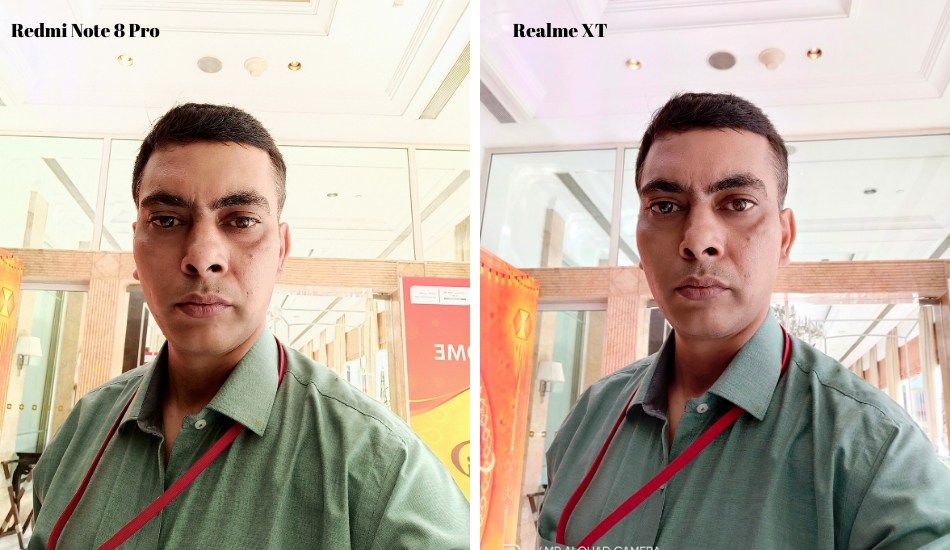 Coming to the front camera, the Realme XT does a better job as it is able to manage background light and the photo does not look overexposed. However, this is not the same case with the Redmi Note 8 Pro. Furthermore, the Realme XT captures better skin tone and overall colours are close to the source with this smartphone.