Redmi K30 will be coming with a display that will measure 6.67 inches as compared to 6.39-inch AMOLED display in the Redmi K20 phone.

Xiaomi is all set to launch its new 5G smartphone with its new Redmi K30 smartphone on December 10 in China. At the Snapdragon Technology Summit, Xiaomi's Co-Founder and Vice-Chairman Lin Bin has already that Redmi K30 will be powered by Snapdragon 765 5G SoC. Now the company has also confirmed the screen size of the Redmi K30 5G phone through a poster.

As per a Weibo post, the Redmi K30 will be coming with a display that will measure 6.67 inches as compared to 6.39-inch AMOLED display in the Redmi K20 phone. The poster also confirms that the phone will come with a hole-punch design for the dual front-facing cameras that comes in 4.38mm of size. 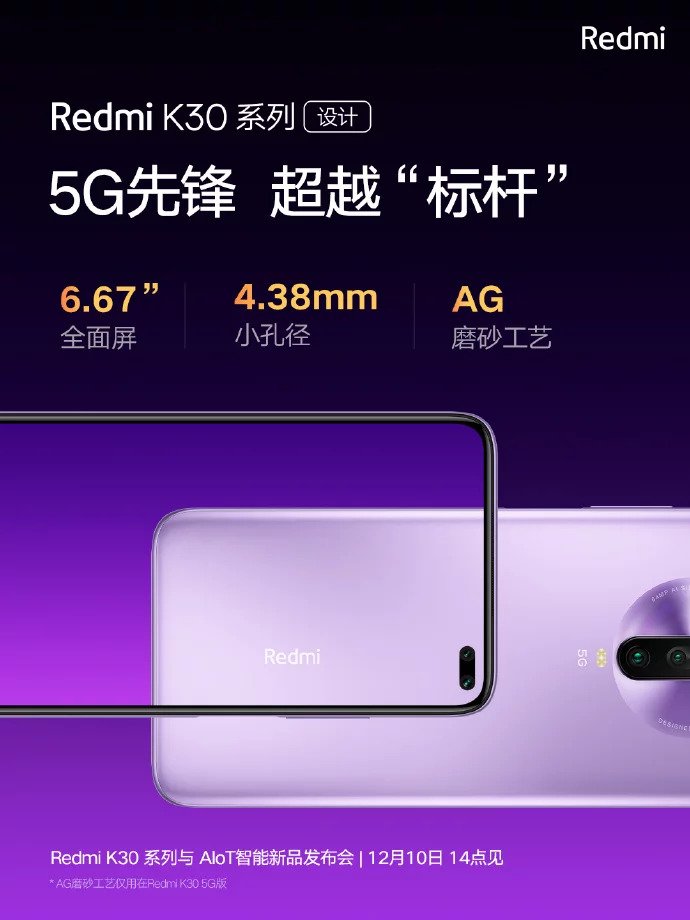 The image shows 64MP mentioned around on the camera which hints that the phone will be equipped with a primary lens of 64-megapixel.  The smartphone is said to have the 64-megapixel Sony IMX686 primary sensor that has a 1/1.73” sensor with f/1.89 aperture. The other sensors of the quad camera setup may include an 8-megapixel sensor, a 5-megapixel sensor and a 2-megapixel camera.

The image also shows that the Redmi K30 will come with an AG frosted glass back, similar to what we have seen on some smartphones such as the OnePlus 7T.

Redmi K30 to launch on December 10 in China