Realme X2 Pro will be equipped with a “msmnile” chipset which is the codename for Snapdragon 855 mobile platform.

Realme will be launching Realme X2 Pro in Spain and China on October 15, while an Indian launch is set for December. Now the smartphone has been spotted on GeekBench benchmarking website with the model number RMX1931.

The listing reveals that Realme X2 Pro will be equipped with a “msmnile” chipset which is the codename for Snapdragon 855+ mobile platform. It will have 12GB RAM and will run on Android 9 Pie operating system. On the Geekbench listing, the Realme X2 Pro has scored a single-core score of 3562 points and a multi-core score of 10,428 points. 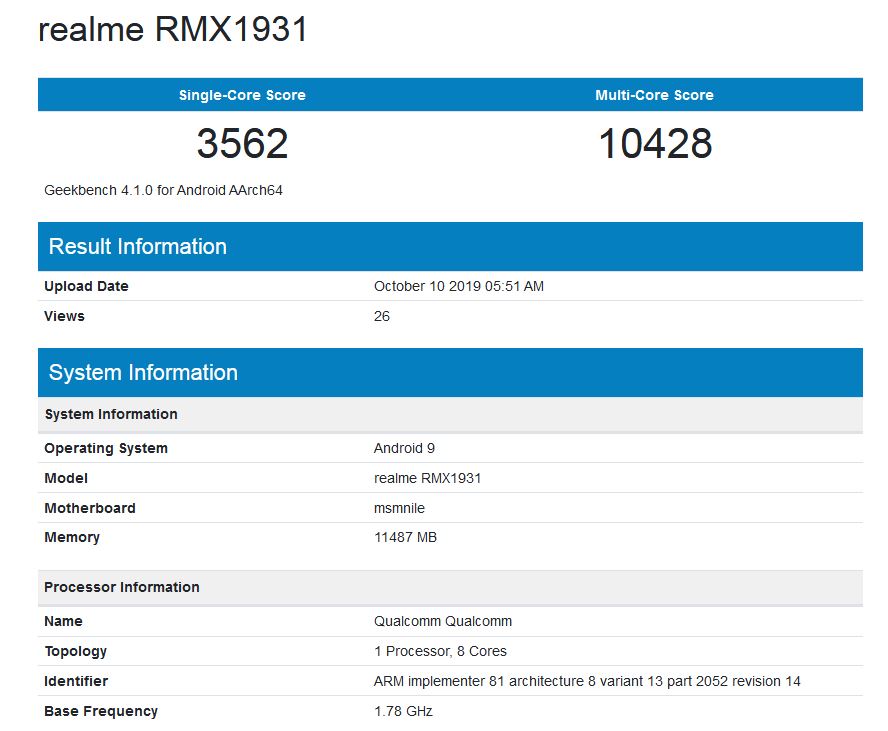 Realme has today also confirmed via a Weibo post that Realme X2 Pro will have 12GB RAM and 256GB storage variant which could be the highest storage version of the smartphone. The phone is also likely to be released in 8GB RAM + 128GB storage and 6GB RAM + 64GB storage variants.

Realme X2 Pro with the same model number RMX1931 was also spotted on TENAA certification website. The phone will be powered by Snapdragon 855+ processor clocked at 2.96GHz, coupled with 6GB of RAM and 64GB of storage. It will be featuring a 6.5-inch full-HD+ (1080×2400 pixels) AMOLED display with a 90Hz refresh rate. Realme X2 Pro will come with a 90 Hz screen refresh rate which can be toggled between 60 Hz and 90 Hz.