Realme Watch S with 1.3-inch round display to be launched on November 2 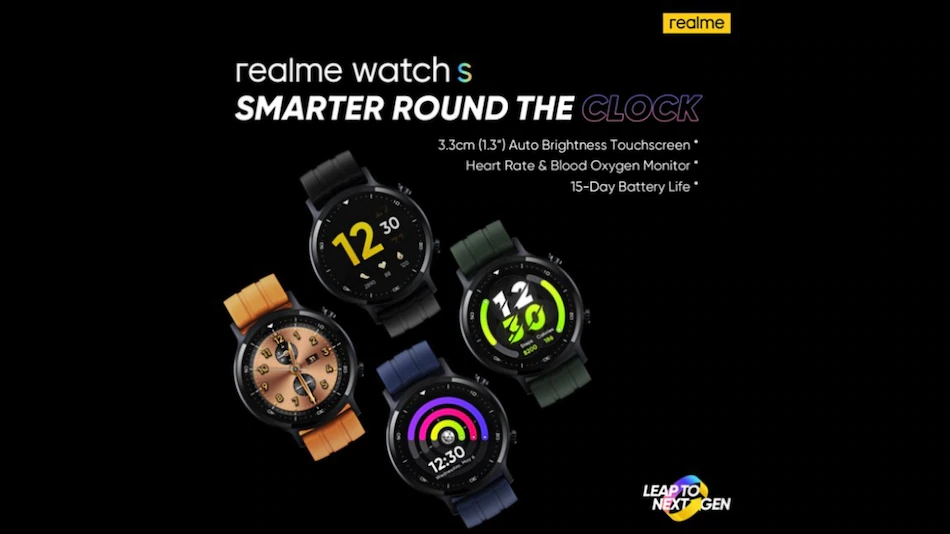 The Watch S will feature a 1.3-inch touch screen display with auto-brightness sensor. The watch will pack a 390mAh battery that will offer 15 days battery life.

Realme launched its first-ever Realme Watch in May this year and later it announced that the Watch S Pro will arrive in O4 2020. Now, the company has confirmed to launch another one on November 2. The upcoming watch will be called as Realme Watch S and it will be launched in Pakistan.

The company’s Pakistani Twitter handle has announced that non-Pro model will be unveiled on November 2 through a virtual event which will be shown on the Realme Pakistan Facebook page and YouTube channel. The tweet shows the Watch S’ design as well as different watchfaces and colourful strap options.

The Watch S will feature a 1.3-inch touch screen display with auto-brightness sensor. The watch will pack a 390mAh battery that will offer 15 days battery life.

The teaser has also confirmed that the Watch S will have a heart-rate sensor and a sensor for monitoring blood oxygen levels. In terms of fitness, it will come with 16 sports modes as compared to 14 modes on the Realme Watch.

Meanwhile, the Realme Watch S Pro is expected to be launched in the coming months as well. The watch was earlier teased at the IFA Berlin 2020. Realme Watch S Pro will come with a round dial and an AMOLED display. It is likely to come with a 1.39-inches AMOLED touch panel with a resolution of 454 x 454 pixels. It is said to pack a battery with a capacity of 420mAh. It should be able to track steps, distance, calories, and real-time heart rate.