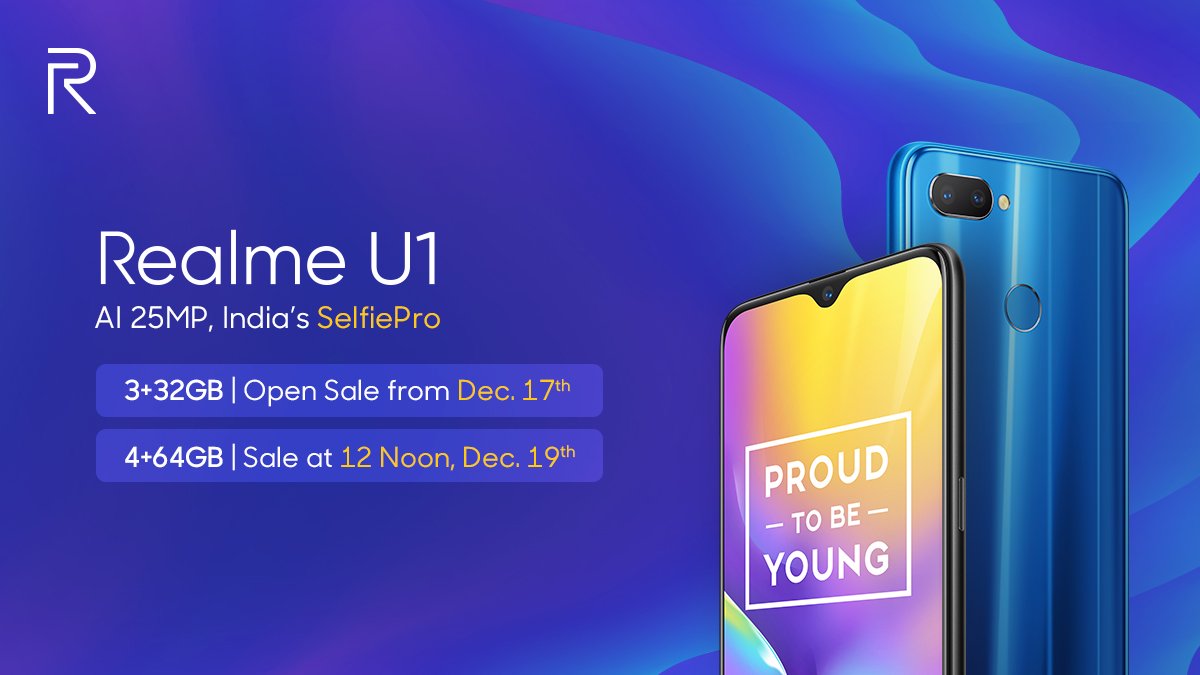 The company official twitter handle has announced the open sale availability. The tweet says “You asked for it & we have done it. No more wait to buy your favourite#IndiasSelfiePro#RealmeU1 3+32GB variant as it is going to be available 24×7 starting Dec. 17th on@amazonIN:https://amzn.to/2PZ0dq9 and Realme Official Website:http://bit.ly/2BQki9k”

In the tweet, the company also announced that the sale of 4GB + 64GB variant of Realme U1 will be held on December 19 at 12 Noon. The customers wishing to buy the 3GB variant will now not have to wait for flash sales.

You asked for it & we have done it. No more wait to buy your favourite #IndiasSelfiePro #RealmeU1 3+32GB variant as it is going to be available 24×7 starting Dec. 17th on @amazonIN: https://t.co/47xpO8WUW6 and Realme Official Website: https://t.co/N3oPmlbfWY pic.twitter.com/DMNiAVnaHc

Moving on to specs, the Realme U1 comes with MediaTek Helio P70 2.1GHz octa-core processor and ARM G72 GPU. With this, the phone becomes world’s first phone with MediaTek Helio P70 SoC. The phone has 6.3-inch Full HD+ dewdrop display with a screen resolution of 2340 x 1080 pixels and an aspect ratio of 19.5:9. The phone features a fingerprint sensor at the back with an AI Face Unlock feature as well.

The phone comes with a dual-camera setup at the rear panel with a combination of 13-megapixel primary sensor with an f/2.2 aperture and a 2-megapixel secondary sensor with an f/2.4 aperture, coupled with an LED flash. For the front, there is a 25-megapixel Sony IMX576 sensor with f/2.0 aperture, 1.8-micron pixels, and 4-in-1 pixels tech. It is fueled by a 3500mAh battery and it runs on Android 8.1 Oreo, which is based on ColorOS 5.2.