Realme GT Neo2 will be launching in the country at 12:30 PM IST on October 13th. The phone is also confirmed to pack a Snapdragon 870 chipset. 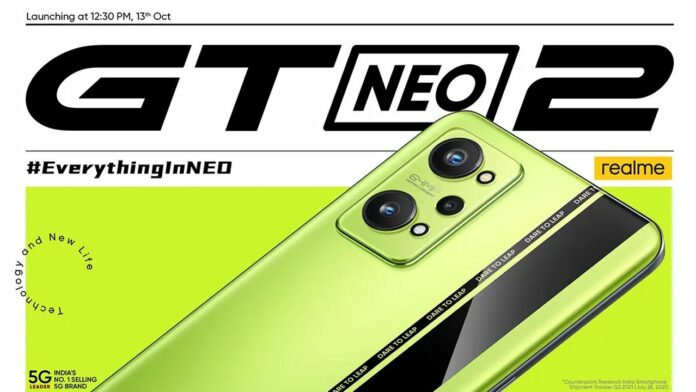 Realme GT Neo2 is now confirmed to be launching in India on October 13. The phone has already been launched in China. Realme has confirmed that it comes with a Snapdragon 870 SoC under the hood.

A landing page of the smartphone is now live on Realme India’s website. The microsite also confirms that Realme GT Neo2 will feature an E4 AMOLED display with a 120Hz refresh rate and 600Hz touch sampling rate. In addition, the phone is also confirmed to pack a Snapdragon 870 chipset under the hood.

As for software, the handset runs Android 11 with realme UI 2.0. There’s also a 5,000mAh battery supporting 65W ultra-fast flash charging that offers 0 to 100% charge in 36 minutes. In addition, it includes an in-display fingerprint scanner for security. The phone also has face recognition as well.