The Realme GT Neo Enhanced Edition might be arriving soon with a Snapdragon 870 SoC, 64MP triple camera setup at the back and a 120Hz display. 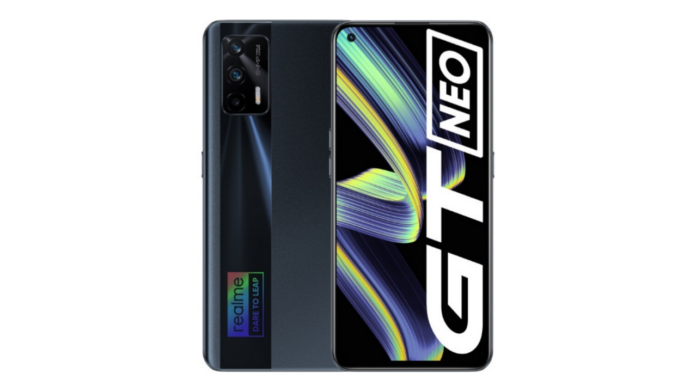 Realme’s ever-expanding GT series of smartphones might witness the launch of a new smartphone soon. The new one should be called the Realme GT Neo Enhanced Edition. To recall, the Realme GT Neo was launched back in March in China. After that, it was sold in India as the Realme X7 Max.

The new leak from Weibo tipster with the name ‘Arsenal’ reveals the price and the specs of the upcoming Realme GT Neo Enhanced Edition. However, leaker states that the name of the smartphone could be something else as well. He says the smartphone could be priced at ¥2,399 (approx Rs 27,400) and ¥2,699 (approx Rs 30,900) for the 8GB + 128GB and the 12GB + 256GB storage trims respectively.

The new Realme smartphone should come with a 6.43-inch Samsung E4 Super AMOLED display. There will be a resolution of 2400 x 1080 pixels (FHD+), a 120Hz refresh rate, an in-screen fingerprint sensor. Furthermore, the smartphone will have Gorilla Glass 5 protection. The Snapdragon 870 SoC will power the smartphone. Further, it will be coupled with up to 12GB LPDDR4x RAM and up to 256GB UFS 3.1 storage.

There will be a triple camera setup at the rear. It should consist of a 64MP OmniVision OV64B primary sensor, an 8MP Sony IMX355 ultra-wide angle sensor and a 2MP monochrome sensor. Moreover, on the front, the device will equip a 16MP Sony IMX471 selfie camera.

Additional features include dual stereos speakers supporting Dolby Atmos, Z-axis linear vibration motor, and NFC. In addition, it will have a glass back with a diamond crystalline pattern and an aluminium frame.

The original Realme GT Neo was powered by MediaTek Dimensity 1200 SoC. It came with up to 12GB RAM and 256GB UFS 3.1 storage. Unfortunately, the phone lacks a MicroSD card slot. The phone runs Android 11 with Realme UI 2.0. It packs a 4500mAh with 50W charging that offers a 50% charge in 16 minutes.