Realme GT Neo 3 to be announced on March 22

Realme GT Neo 3 will launch in China next week. It will feature a 50MP Sony IMX766 main camera sensor with OIS support. 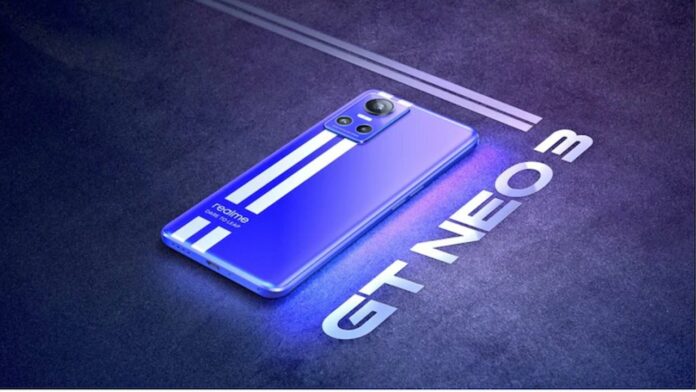 Realme will announce the Realme GT Neo 3 smartphone in China on March 22. The company has announced the launch date on Weibo.

In addition to that, the company has also shared a new teaser for the upcoming phone. The teaser shows the rear design of the Realme GT Neo 3 Le Mans edition which will be a special edition model of the smartphone.

As per the official render, the Realme GT Neo 3 Le Mans edition will feature a rectangular triple camera module on the back. The camera unit will be followed by two white-colored strips. The company’s name and tagline can also be seen towards the bottom of the white strips.

Further, the bottom edge houses a USB Type-C port, a speaker grille, a microphone, and a SIM slot. The left side has volume buttons while the right side comes with power button.

Realme has already confirmed that the phone will support 150W fast charging that will charge the 4500 mAh battery in 15 minutes. The phone is also confirmed to feature a MediaTek Dimensity 8100 SoC.

will sport a 6.7-inch Full HD+ AMOLED display with a 120Hz refresh rate. Under the hood, the smartphone will be powered by the upcoming MediaTek Dimensity 8100 chipset. It should be paired with 8GB/12GB RAM and 128GB/256GB/516GB storage. The smartphone will be backed by a 4,500mAh battery.

As for optics, the phone is rumoured to feature a 50MP Sony IMX766 main camera sensor with optical image stabilisation (OIS) support. In addition, there will also be an 8MP secondary camera, and a 2MP tertiary camera. For selfies, there’s a 16MP camera on the front. The device should boot Realme UI 3.0 based on Android 12 out of the box. The device is also tipped to launch in India.