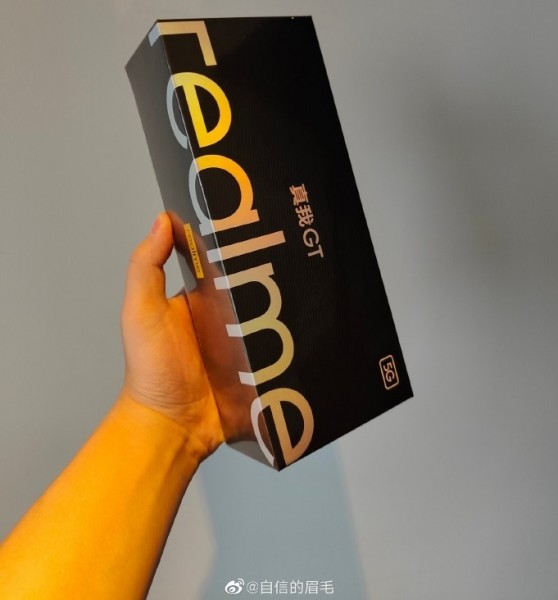 The Realme GT is expected to sport an OLED panel with up to 120Hz refresh rate support and with a resolution of 1440×3200 pixels.

Realme GT 5G flagship phone is set to be launched on March 4. Now ahead of the launch, the phone has been spotted on Geekbench, confirming the earlier rumoured specifications. There is also a leaked retail box doing the rounds. Realme GT is also confirmed to ship with Android 11-based Realme UI 2.0

As per the Geekbench, the Realme GT 5G is listed with model number RMX2202. The listing reveals the smartphone will be powered by Snapdragon 888 chipset. Further, the device will come with 12GB of RAM. It will also run on Android 11 out of the box.

Separately, the Realme GT retail box was leaked on Weibo by former Oppo Vice President Brian Shen. The retail box shows Realme GT smartphone’s Bumblebee leather edition. Another shared image by him shows the handset will also come in a glass back version.

The Realme GT will flaunt Dual-tone Vegan Leather Design which will use two different kinds of material in two different colours. In addition, the phone will come with Dolby Atmos and stereo speakers.

The Realme GT is expected to sport an OLED panel with up to 120Hz refresh rate support and with a resolution of 1440×3200 pixels. It has been confirmed to powered by Snapdragon 888 processor and equipped with 12GB of RAM and 256 GB of internal storage. The phone will feature Stainless Steel VC Cooling System. The new cooling system further improves the phone’s heat dissipation performance by applying stainless steel in the cooling system and optimizing the heat dissipation structure.

The Realme GT 5G is expected to feature 125W fast charging on a 5000mAh battery. Realme’s 125W UltraDart fast charging technology is said to charge a 4,000mAh battery up to 33% in just three minutes, and 100% in 20 minutes. The smartphone will most likely launch with Realme UI 2.0 based on Android 11.

Realme GT is speculated to feature a triple camera setup with 64-megapixel primary camera, 13-megapixel and a 13-megapixel secondary camera. The other sensors could be the ultra-wide-angle lens and a depth or macro lens. The phone is also expected to have a 3.5 mm audio jack.