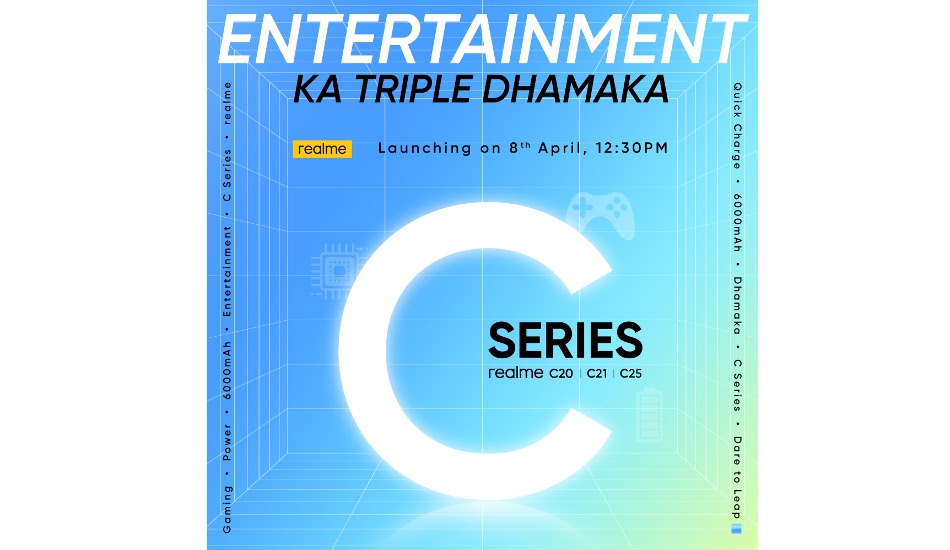 Realme C21 was released in Malaysia earlier this month while the Realme C25 was launched in Indonesia last week.

Realme is gearing up for the launch of its C-series smartphones in India. The company will launch three new smartphones – Realme C25, C21, C20 in India on April 8.

Realme C20, Realme C21, and Realme C25 will be available on Flipkart as the e-commerce platform has already started teasing the launch.

Realme C20 was the first to go official earlier this yearin Vietnam. The Realme C21 was released in Malaysiaearlier this month while the Realme C25 was launched in Indonesialast week.

Realme C25 packs a huge 6,000mAh battery with 18W fast charging support. It runs on Realme UI 2.0 based Android 11 OS. For the camera, there is a square-shaped triple camera setup with a combination of a 48-megapixel primary camera, a 2-megapixel depth sensor, and a 2-megapixel macro shooter. For the front, there is an 8-megapixel selfie camera.

Realme C21 will pack a 5,000mAh battery with 10W charging support. It runs on Realme UI based on Android 10. For the camera, there is a square-shaped triple camera setup with a combination of a 13-megapixel sensor, a 2-megapixel portrait sensor and a 2-megapixel macro sensor. For the front, there is a 5-megapixel selfie camera with an f/2.2 aperture.

Realme C20 sports a 6.5-inch HD+ LCD panel with a resolution of 720 x 1600 pixels and a waterdrop notch and is protected by Corning Gorilla Glass. It has a single 8MP sensor on the back with an LED flash. There is a 5MP snapper on the front for selfies and video chats.

The smartphone is powered by the MediaTek Helio G35 processor paired with 2GB of RAM and 32GB of internal storage. The Realme C20 is backed by a 5000mAh battery and runs on Android 10 based on Realme UI.