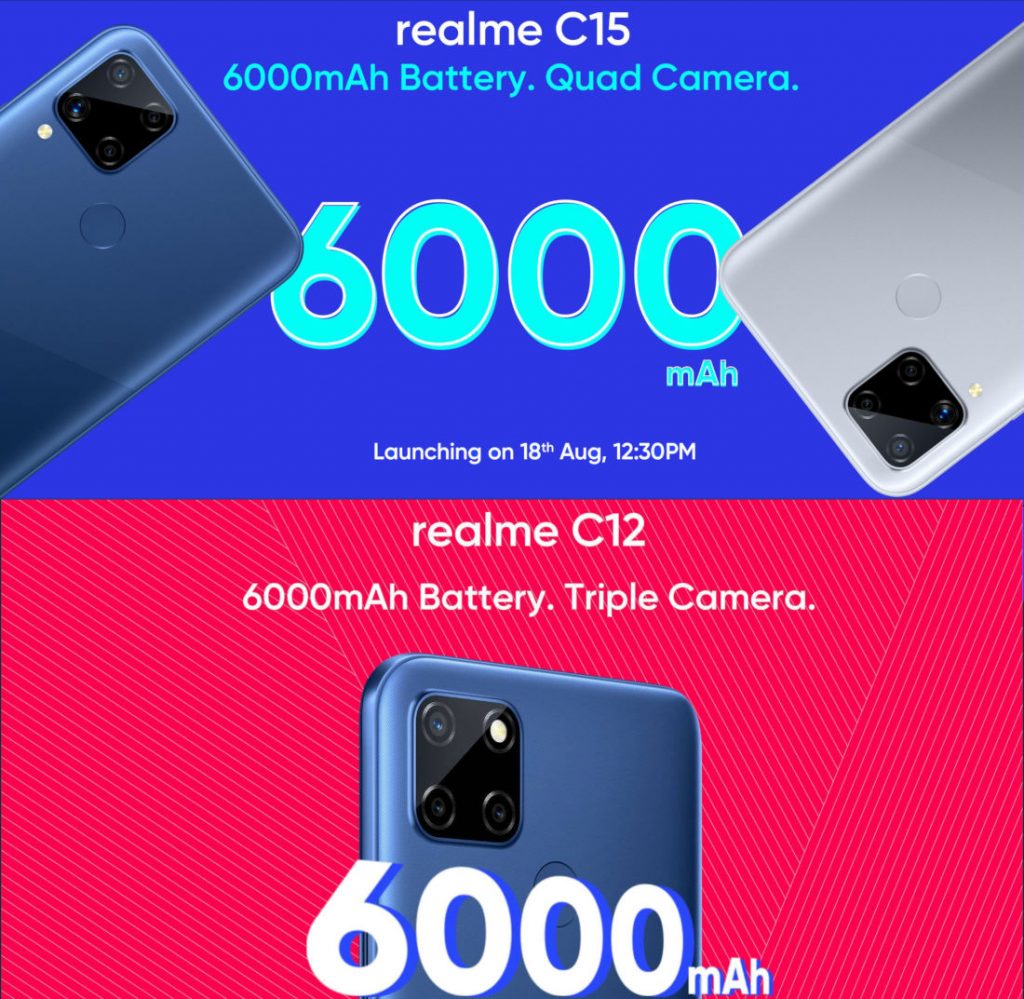 Realme C12 and Realme C15 will launch in India through a virtual event that will take place at 12:30 PM.

Realme has announced that it will be launching Realme C12 and C15 smartphones in India on August 18. Both the devices are teased to come with a 6,000mAh battery.

Realme C12 and Realme C15 will launch in India through a virtual event that will take place at 12:30 PM. Like other Realme smartphones, Realme C12 and C15 will also be available on Flipkart.

The Realme C12 was recently spotted on Geekbench and Bureau of Indian Standards (BIS) certification websites. Realme C12 will come with model number RMX2189. The smartphone will run on Android 10 operating system. The GeekBench listing revealed that the smartphone will come with 3GB of RAM. The Realme C12 will be powered by an octa-core processor with a base frequency of 2.3GHz. The chipset could be MediaTek Helio P35 processor.

Realme C12 will feature 6,000mAh battery that is teased by the company to deliver 57 days of standby time, 46 hours of voice calling, or 60 hours of music playback on a single charge. The phone will come with triple rear camera setup, paired with an LED flash.

As far as the specifications of the device are concerned, the Realme C15 features a 6.5-inch HD+ LCD display with 1600 x 720 pixels resolution and 20:9 aspect ratio. The smartphone is powered by the MediaTek Helio G35 processor with IMG PowerVR GE8320 GPU. It has up to 4GB LPDDR4x RAM, 128GB internal storage which is expandable up to 256GB with microSD card slot.

Realme C15 runs on Android 10 with Realme UI running on top of it and is backed up by a massive 6,000mAh battery with 18W fast-charging support. On the camera front, the phone comes loaded with a quad-camera setup with a combination of 13 megapixels main camera, 8 megapixels ultra-wide lens, 2 megapixels macro camera, as well as a 2 megapixels depth sensor. It has an 8MP front-facing camera with f/2.0 aperture.