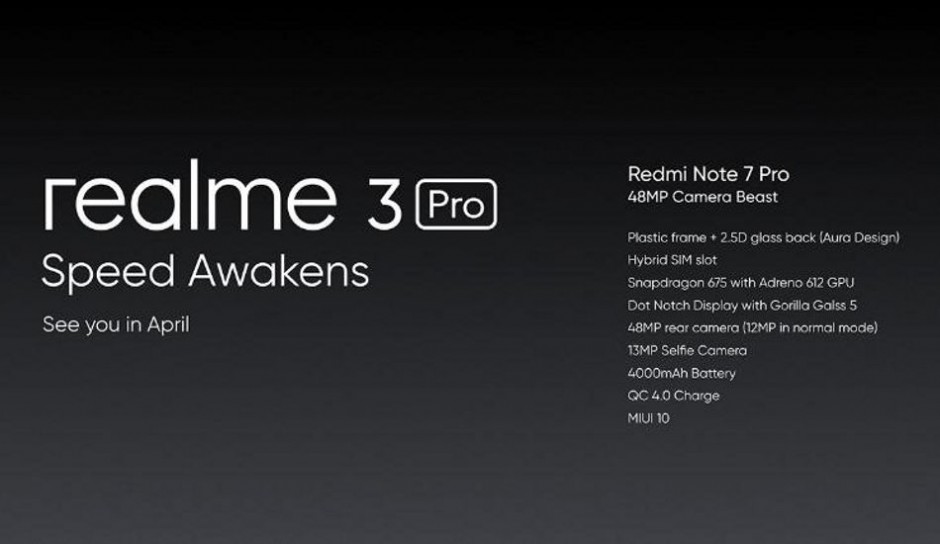 The phone’s new colour variant will be available on Flipkart and Realme’s own website starting midnight of May 15.

Realme launched Realme 3 Pro along with Realme C2 smartphone recently. The smartphone was announced in Carbon Gray, Nitro Blue, and Lightning Purple colour variants. The Lightning Purple variant will now go on sale in India for the first time ever at 12 A.M tonight.

The phone’s new colour variant will be available on Flipkart and Realme’s own website starting midnight of May 15. The announcement comes via Realme’s CEO, Madhav Sheth on his Twitter handle.

The tweet reads “One more reason to cheer: The much awaited Lightning Purple color of realme 3Pro will be live for sale at 00:00hrs, May 15 on Flipkart and https://realme.com for the first time ever. Are you guys excited?”.

To recall the specifications of Realme 3 Pro, the device has a dual-camera setup with a combination of 16-megapixel primary lens with Sony IMX519 sensor, f/1.7 aperture, 1.22-micron pixel along and a 5-megapixel secondary shooter with f/2.4 aperture. On the front, you get a 25-megapixel camera with an aperture of f/2.0 aperture, 1/ 2.8 sensor size.

The smartphone is powered by Qualcomm Snapdragon 710 SoC, paired with 4GB/ 6GB of RAM and Adreno 616 GPU. The phone is equipped with 4045mAh battery with VOOC 3.0 fast charging. Realme 3 Pro runs on Android 9 Pie with ColorOS 6.0 on top. It features a 6.3-inch Full HD+ display with a screen resolution of 2340 x 1080 pixels, 90.8-percent screen-to-body ratio and Corning Gorilla Glass 5 protection.