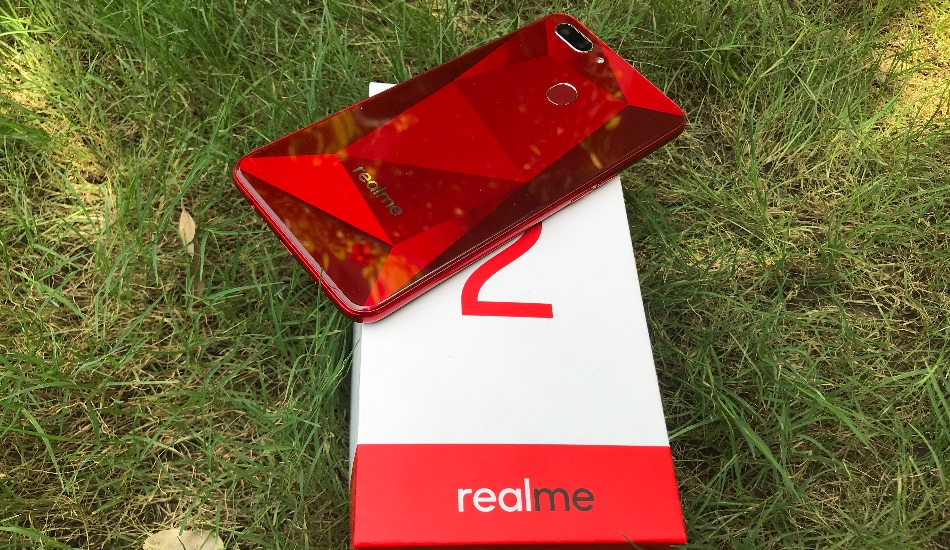 The phone is powered by a Qualcomm Snapdragon 450 octa-core processor clocked at 1.8GHz coupled with Adreno 506 GPU. The device is available in two memory configurations: 3GB RAM with 32GB storage and 4GB RAM with 64GB storage.

Realme Mobiles has today announced the launch of its second smartphone in India, dubbed as Realme 2. The smartphone comes with a price tag of Rs 8,990 for the 3GB RAM variant, while the 4GB RAM option is priced at Rs 10,990. The phone will be exclusively available on Flipkart starting from September 04, 2018, in Diamond Blue, Black and Red colour options.

The smartphone comes loaded with a diamond-like finish at the back, which has an optical coating to give a refractive lustre like feel. The phone features a 6.2-inch SuperView HD+ display with a screen resolution of 1520 x 720 pixels, 19:9 aspect ratio and a 271ppi pixel density. The phone features a notch on the top and it is equipped with 88.8 per cent screen-to-body ratio.

Check out the Realme 2 Review!

The phone is powered by a Qualcomm Snapdragon 450 octa-core processor clocked at 1.8GHz coupled with Adreno 506 GPU. The device is available in two memory configurations: 3GB RAM with 32GB storage and 4GB RAM with 64GB storage. The memory can be further expanded up to 256GB via micro SD card slot.

Check out the Realme 2 in Pictures!

The phone features a fingerprint sensor at the back panel along with face unlock feature. The phone runs on Android 8.1 Oreo, which is based on the company’s custom user interface ColorOS 5.0. The Realme 2 is backed by a 4230mAh battery, which the company claims deliver 44 hours of calls, 18 hours of music playback, 15 hours of video playback, and 10 hours of gaming.

Check out the Realme 2 Camera Samples!