The alleged smartphone has appeared on GFXBench website revealing some key specification of the upcoming smartphone.

Just yesterday we reported that Razer is planning to launch a new gaming-centric smartphone on November 1. Now, the alleged smartphone has appeared on GFXBench website, revealing some key specification of the upcoming smartphone.

According to the listing (via GSMArena), the smartphone will sport a 5.7-inch display with a screen resolution of 2560 x 1440 pixels. The resolution indicates that the phone will come loaded with a standard 16:9 aspect ratio. This could be interesting as most of the flagship devices are now switching to 18:9 aspect ratio. 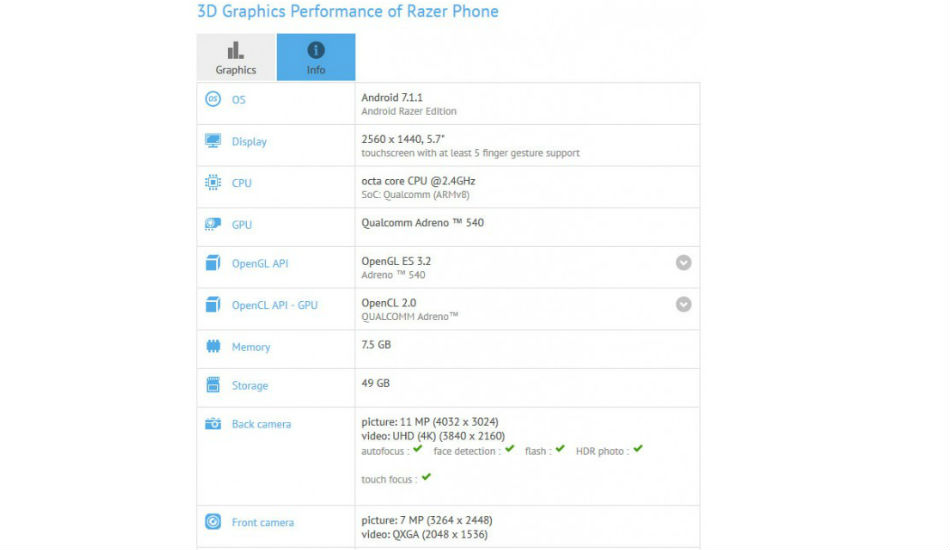 Coming to the hardware, the listing reveals that the phone will feature a massive 8GB of RAM, which could be interesting to see as not many devices are available that sport that much RAM. Further, the smartphone will be powered by the latest Qualcomm Snapdragon 835 processor along with Adreno 540 GPU. The upcoming smartphone will be backed by a 64GB of internal storage.

On the camera front, the device will come loaded with a 12-megapixel rear camera with autofocus, face detection, HDR photo and LED flash, while for the front, there would be an 8-megapixel shooter. The device will run on a custom user interface, which will be based on Android 7.1.1 Nougat. The phone will further come loaded with an accelerometer, barometer, Bluetooth, GPS, pedometer, WiFi, NFC, and it will support single SIM.

Razer will probably market it as a gaming-centric smartphone, which makes sense as the company mainly focuses on the gaming department. Earlier this year, Razer acquired Nextbit, a cloud-based smartphone manufacturer, which hinted that the company is looking to venture into smartphone industry in the near future. However, it would be interesting to what the company is planning to launch on November 1. So, stay tuned us.