HP's first Android smartphone is reportedly codenamed as Brave and will house a quad-core 2.3 GHz Qualcomm Snapdragon 800 mobile chipset. However HP spokesperson calls it a hoax.

HP is reportedly working on a Android operating system based smartphone. PhoneArena has claimed to have got the image renders and AnTuTu Benchmark listing of the HP smartphone.

As per the leaked images of the AnTuTu Benchmark, HP’s first Android smartphone is dubbed as HP Brave 675A. It will feature 4.5-inch touchscreen display with 1600×900 resolution. The phone packs quad-core 2 GHz Qualcomm Snapdragon 800 mobile processor with 2 GB RAM. The smartphone is said to feature a 14.5 megapixel camera at the back and 5 megapixel camera in the front. 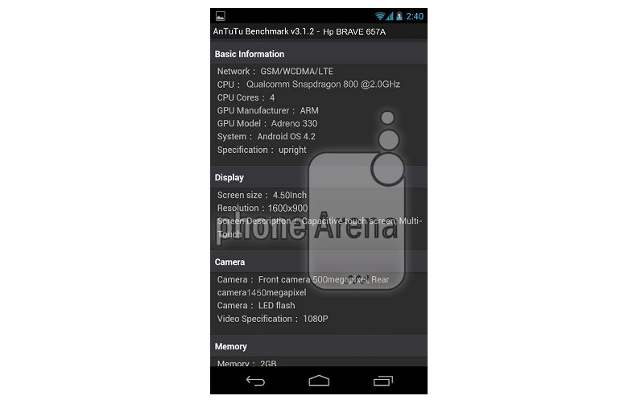 Meanwhile, a spokesperson of HP dismissed the report, saying, “This is not an HP phone. The photo is a fabrication and is not a photo of anything HP has in the works. Someone is making stuff up.”

The image renders appear like someone has taken the Apple iPhone chassis image and stamped the HP logo at the back and Android user interface in the front.

The leaked images and specifications details may not be of the actual HP Android phone but then it certainly draws the attention to the company for a bit.