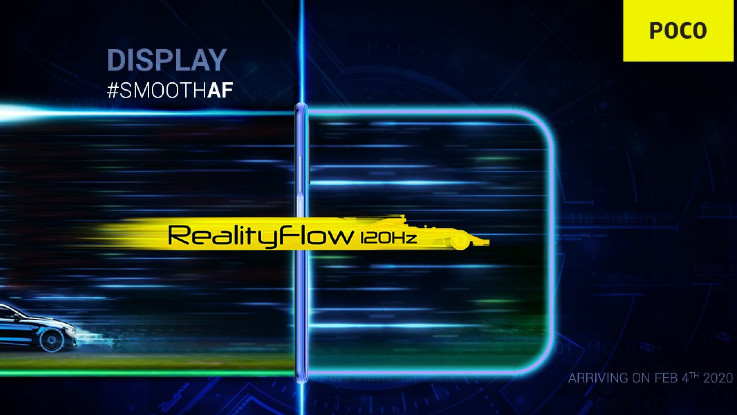 The company has revealed that the latest smartphone will come loaded with a 120Hz refresh rate.

Poco is all set to launch its latest smartphone, the Poco X2, in India on February 04, 2020. Now, just ahead of the official launch, the company has teased some features of the upcoming Poco X2.

The company has revealed that the latest smartphone will come loaded with a 120Hz refresh rate. The company revealed this information on its official Twitter handle. The tweet reads, “You wanted to hear this. It’s time to Xperience the Xtreme with a display that is #SmoothAF. Introducing the awesome 120Hz display on the #POCOX2.” With this, it is confirmed that Poco X2 will be the first smartphone from the brand to come loaded with a higher screen refresh rate.

For your reference, Asus ROG Phone 2 comes loaded with a 120Hz refresh rate, while the OnePlus 7T, OnePlus 7T Pro and OnePlus 7 Pro are loaded with 90Hz refresh rate. However, it is currently not known whether the company will use an AMOLED display on the latest smartphone or not.

Previously, the company teased that the smartphone will be backed by Sony IMX686 sensor, which comes with 64-megapixel resolution. The phone is also said to be powered by a Qualcomm processor along with some sort of liquid cooling feature and it will also feature fast charging support.

Interestingly, the same refresh rate and the camera sensor is found in the Redmi K30. The smartphone is said to be none other than Poco X2, which is said to launch in India next month. The Redmi K30 is available in two processors, the 5G variant comes with Qualcomm Snapdragon 765 processor, while the standard version is loaded with a Qualcomm Snapdragon 730G chipset.