Oppo K5 will run Android Pie based ColorOS 6.0 out of the box.

Oppo is all set to launch Oppo K5 in China on October 10. Now the phone has been spotted on the Geekbench benchmarking website. The listing has revealed quite a few specifications of the upcoming smartphone which are inline with earlier leaks. 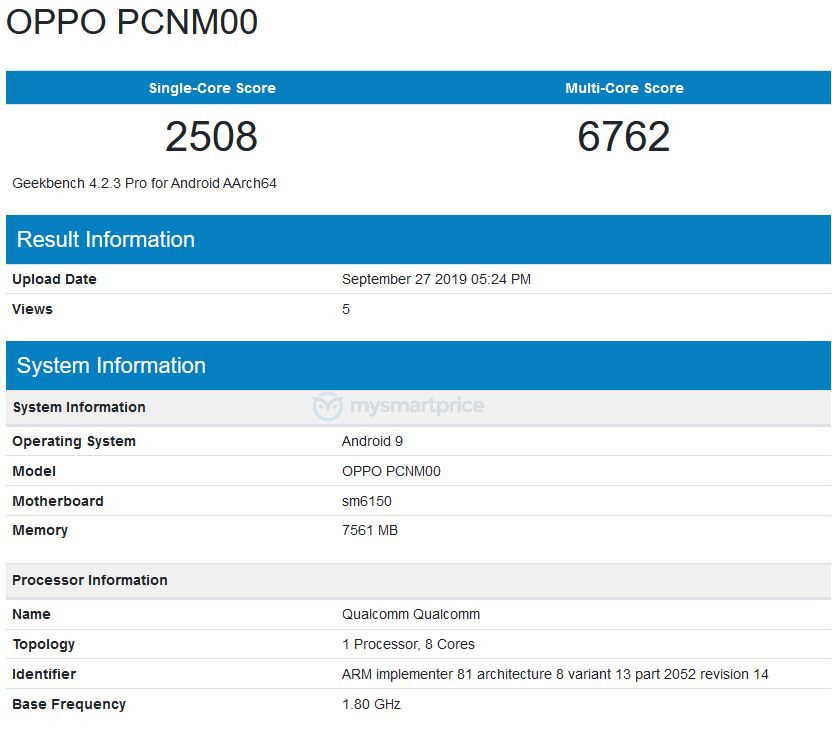 For the software, theOppo K5 will run Android Pie based ColorOS 6.0 out of the box. The benchmark results revealed the phone scored 2508 points in the single-core test and 6762 points in the multi-core test.

Oppo K5 was recently confirmed to feature Snapdragon 730G SoC and VOOC 4.0. Oppo K5 will be the first phone from the company which will arrive with VOOC 4.0 Flash Charge technology that reduces the charging by 40 percent when compared to VOOC 3.0. With the VOOC 4.0 technology, the smartphone will gain 67 percent battery power in just 30 minutes.

Oppo K5 will come in Green, Blue and White colours with 3D Glass back. It features a 6.4-inch Full HD+ AMOLED display with a resolution of 2340 × 1080 pixels and a waterdrop notch. The phone is powered by a 2.2GHz octa-core processor which is expected to be the Snapdragon 730G chipset and it’s coupled with 8GB of RAM and 128GB of UFS 2.1 storage. There will support for expandable storage to up to 256GB through a microSD card.