The Oppo F3 Plus smartphone was launched in March this year. 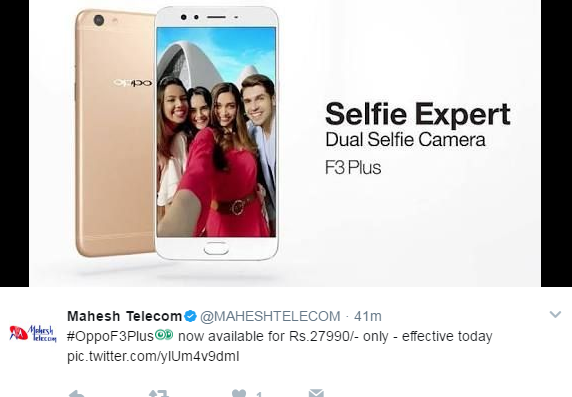 However, at the time of writing, the smartphone is still retailing at the same price of Rs 30,990 on Amazon and Flipkart.

The main highlight of the device is the dual front-facing camera setup which includes a 16-megapixel camera with 1/3 inch sensor, aperture f/2.0 and an 8-megapixel 120-degree wide-angle lens with a 6P lens. The front camera also comes loaded with Beautify 4.0. For the rear, the smartphone boasts a 16-megapixel shooter with Sony IMX398 sensor, aperture f/1.7 and dual PDAF focusing technology, which basically doubles the area of the sensor’s pixel making it 40 per cent faster focus speeds, as per company’s claim. The device will be available in gold and black colour variants.

As for the rest of the specifications are concerned, the smartphone sports a 6-inch Full HD display with Corning Glass 5 protection and a screen resolution of 1920 x 1080 pixels. The device is powered by an octa-core Qualcomm Snapdragon 653 processor along with Adreno 510. The phone is backed by a 4GB of RAM and 64GB of internal storage, which can be expanded up to 256GB via microSD card slot. There is also a fingerprint sensor embedded in the home button, which is equipped with a hydrophobic membrane making it water-resistant.