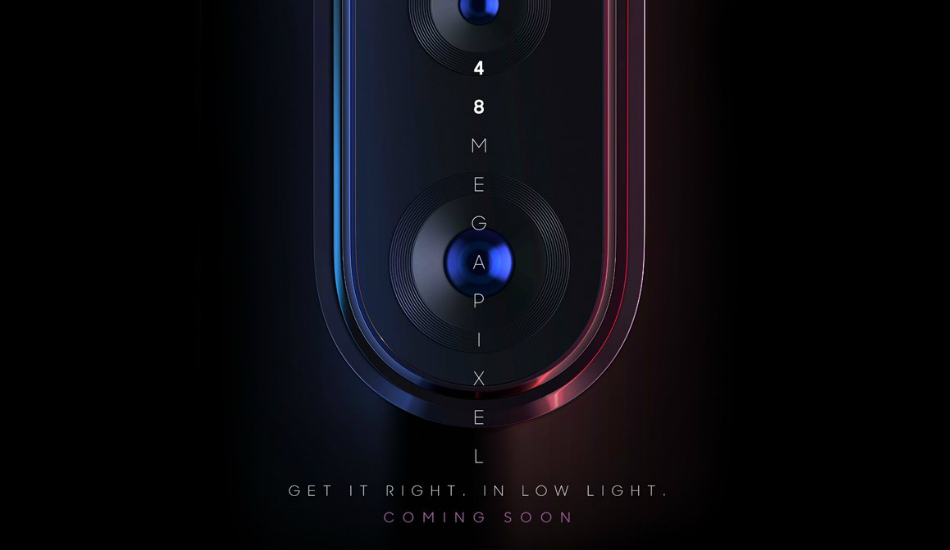 Oppo will soon unveil the Oppo F11 Pro with a dual rear camera at the back that equips a 48-megapixel main lens, for the first time in Oppo's history. This sensor could possibly be Sony’s IMX586 CMOS sensor which will be coupled with a Super Night Mode.

Precisely a week after introducing the Oppo K1 as the cheapest smartphone with an in-display fingerprint scanner for Rs 16,990, Oppo has now revealed that it’ll soon unveil the Oppo F11 Pro in India. The Oppo F11 Pro will offer a new camera configuration for primary imaging with an improved AI engine and Super Night mode for low-light photography.

The news comes after we received press statement from Oppo regarding their latest smartphone – the Oppo F11 Pro. The successor to the F9 Pro will equip a dual rear camera at the back with a 48-megapixel main lens which will be the first time in Oppo’s history. This sensor could possibly be Sony’s IMX586 CMOS sensor which was introduced last year.

Oppo says the 48MP lens on the F11 Pro will offer a “high-definition camera with impressive photo quality and viewing experience“. The camera will also equip a Super Night Mode which will make use of OPPO’s exclusive AI Ultra-Clear Engine to shoot images with good detail under low light conditions.

The AI Engine and Ultra-clear Engine are expected to deliver Super Night Mode by intelligently recognising scenes and optimises the settings. The setup will also offer optimisation for image-stabilisation during long exposure, low-light performance, and skin brightening.

Additionally, Oppo Mobile India has shared an image with the tags “48 Megapixel” and “Get it right. In low light” on Twitter. Oppo’s main Twitter account has also posted a short video promo about the upcoming device.

They say a picture is worth a thousand words.
We say a #BrilliantPortrait is worth even more.

It’s not just the F11 Pro which is touted with a 48 MP rear camera as the Oppo’s own R19 smartphone is expected to come with a similar setup where the dual lens are aligned vertically. In case you didn’t know, Xiaomi and Honor have already released their interactions of smartphones with a 48MP camera with the launch of the Redmi Note 7 and Honor View 20 respectively. Other upcoming phoned expected to come with 48MP camera setup is the Vivo V15 Pro and the Meizu Note 9.