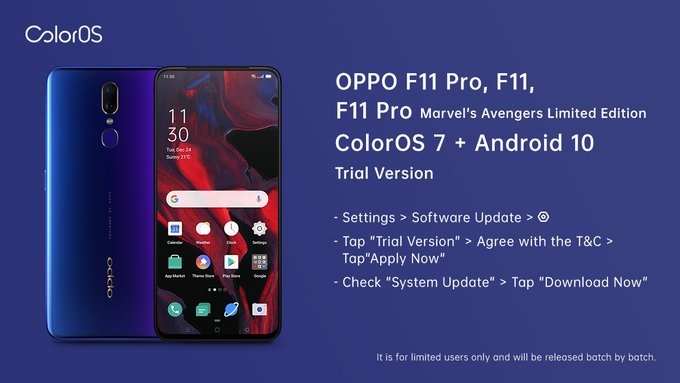 The company has revealed that it has opened the registration of ColorOS 7 for Oppo F11, Oppo F11 Pro and Oppo F11 Pro Marvel’s Avengers Limited Edition.

In order to apply for the ColorOS 7 trial version, Oppo F11 and F11 Pro users need to update their smartphones to the latest version. Users then need to go to Settings > Software Updates and then tap on the settings icon, which is present at the upper right corner. There, users need to tap on Trial Version and a pop-up will emerge where users need to fill all the details and then tap on then tap on ‘Apply Now’. After this, users will get a message that the application is successfully registered.

Users need to go Software Updates and refresh for the latest update. Oppo has warned that the trial version “aims at functional testing and may be unstable, but user requirements can be basically met. You may encounter some bugs and are expected to report these bugs to us to help us solve these problems.”

As per the official changelog, users will get a new borderless design that makes visuals more attractive. The update also adds Oppo Sans as the default font. It also improves the user interface and one-handed operation.

The update also adds the ability to drag an app out of the Smart Sidebar to open it in split-screen mode. It also adds two new settings namely Assistive Ball Opacity and Hide Assistive Ball on the fullscreen app. It also optimises the floating window feature for more apps. It also adds a bubble, which is displayed when you open an app in a floating window from the Smart Sidebar. Tap the bubble to collapse and open the app.

Apart from this, it brings new gestures support, optimised screenshot preview and settings along with new Dark Mode and Focus. It also adds new charging animation along with a host of other features.