The new prices of Oppo phones are reflecting on Amazon as well as Flipkart.

Oppo has increased the price of a bunch of its smartphones. The list includes devices like Oppo A11k, A53s, A15, A15s, and F19. The new prices are reflecting on Amazon as well as Flipkart.

The prices are also applicable in offline stores. Mumbai based smartphone retailer, Mahesh Telecom has also confirmed the new prices via its Twitter handle. 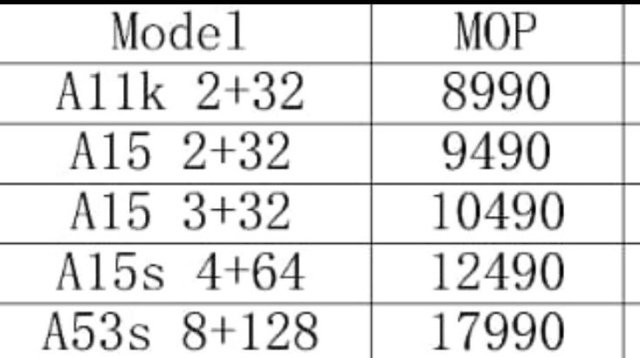 Let’s check out their new prices:

Oppo A53s 5G comes with a 6.5-inch HD+ display with 1600 x 720 pixels resolution. The smartphone is powered by a MediaTek Dimensity 700 chip with a clock speed of 2.2GHz. The phone comes with up to 8GB of RAM and 128GB of storage which can be expanded via a microSD card of up to 1TB.

On the camera front, the Oppo A53s has a triple rear camera setup with a 13-megapixel main shooter, a 2-megapixel macro camera and a 2-megapixel depth sensor. There is also an 8-megapixel selfie camera at the front. It comes with a side-mounted fingerprint sensor as well.

For the camera, the phone has a square-shaped AI triple-rear camera setup of 13-megapixel, 2-megapixel (macro), and 2-megapixel (depth) sensors. The phone sports a fingerprint reader on the back. The device runs on ColorOS 7.2.

The Oppo A15 has same specs as of the A15s except for RAM and storage. It offers 2GB or 3GB of RAM, and 32GB internal storage. All the other specs remain same.

Oppo A11k features a 6.22-inch HD+ display with a screen resolution of 1520 x 720 pixels. The smartphone is powered by a Mediatek Helio P35 processor clocked at 2.3GHz along with 2GB of RAM and 32GB of internal storage. For security, the phone comes with a fingerprint sensor at the back.

On the camera front, the Oppo A11k features dual-camera setup at the rear with a combination of 13-megapixel primary lens and a 2-megapixel depth sensor. For the front, there is a 5-megapixel shooter. Oppo A11k is backed up by a 4230mAh battery