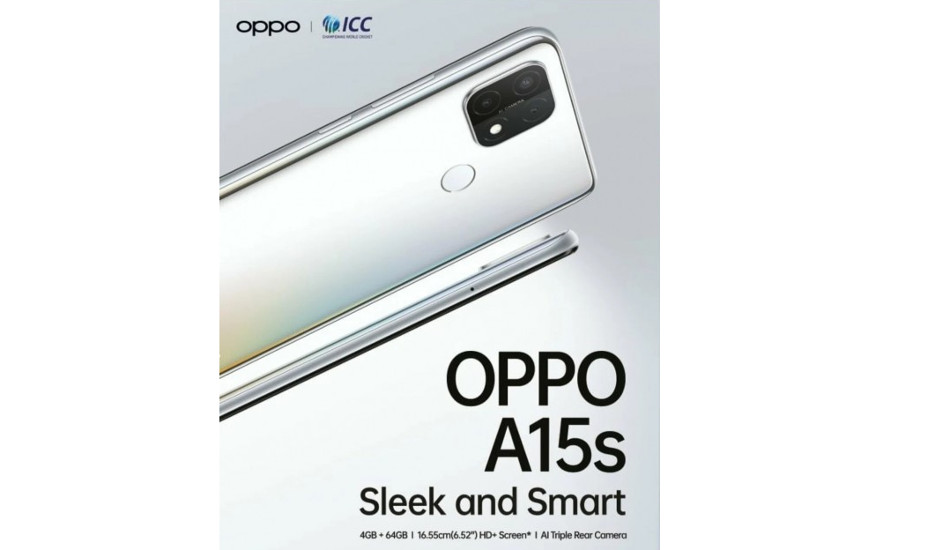 Oppo recently launched Oppo A15 smartphone in India. The company is now working on a new smartphone in its A-series – Oppo A15s. A promotional image of the device has revealed its design and specifications.

Oppo A15s is also likely to launch in India soon as the Mumbai-based retailer Mahesh Telecom has tweeted that the phone will soon be coming to India.

As per the poster, Oppo A15s will come in silver colour. The right side of the device has volume and power on/off control buttons, while the left side comes with a SIM slot.

Oppo A15s will feature a 6.52-inch HD+ IPS LCD display with 720 x 1600 pixel resolution. It will have 4GB of RAM and 64GB of expandable storage. There will be a fingerprint reader on the back of the device.

There’s no mention of the processor in the poster. The phone may feature the same Helio P35 that fuels the Oppo A15. It might be backed up by a 4,230mAh battery.

There will be a square-shaped AI triple camera system. The camera specifications include a 13MP primary camera, a 2MP macro and 2MP depth on the back. Up front, there will be a 5MP selfies snapper, housed in a waterdrop notch.

To recall,Oppo A15 features a 6.52-inch HD+ display with 720×1600 pixels resolution. It ispowered by octa-core MediaTek Helio P35 SoC, coupled with 3GB of RAM and 32GB storage.It packs a 4,230mAh battery that supports 10W charging and runs on Android 10

For the optics, there is a triple camera setup with 13-megapixel primary sensor, a 2-megapixel macro shooter and a 2-megapixel depth sensor. For selfies and video chats, the smartphone has a 5-megapixel selfie camera sensor at the front.