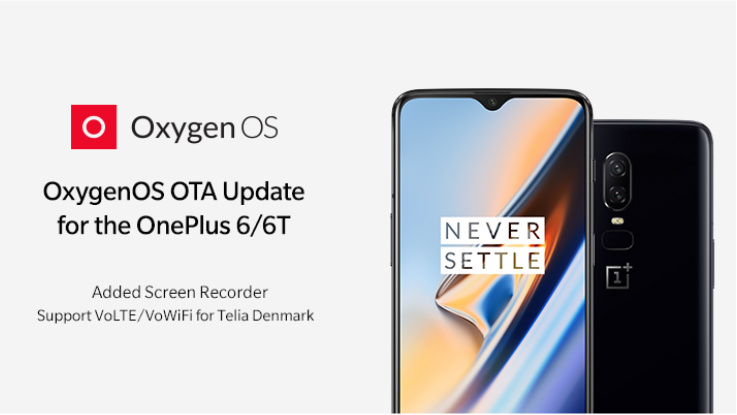 The new update brings the much-awaited screen recorder feature along with other improvements.

OnePlus has started rolling out a new update to its OnePlus 6 and OnePlus 6T smartphones. The new update brings the much-awaited screen recorder feature along with other improvements.

The company is rolling out the update with version number OxygenOS 9.0.15 for the OnePlus 6T and 9.0.7 for OnePlus 6. As per the official changelog, the company has added Screen recorder feature. The said feature was introduced with OnePlus 7 series and it basically allows users to record their phone’s screen.

The update also improves screen rotation feature and it also brings latest June security patch. The update adds support for VoLTE/VoWiFi for Telia Denmark. In order to check for the latest update users can go to Settings > System > System Updates. As always, this OTA will be incremental. The OTA will reach a small percentage of users first, and the company will begin a broader rollout in a few days.

Interestingly, the company is yet to roll out the Zen Mode for both the devices. OnePlus included the feature in the OxygenOS Beta update. The mode basically disables your phone for 20 minutes, allowing you to enjoy your surroundings or simply focus on your work without being distracted.

Previously, OnePlus started rolling out a new Beta update to its OnePlus 6, OnePlus 6T, OnePlus 5 and OnePlus 5T smartphones. The new OxygenOS Open Beta update brings Android 9.0 Pie Digital Wellbeing feature to all the devices. The Beta update also brings the Fnatic mode, which was introduced in the OnePlus 7 Pro.

The mode basically boosts the performance and network reception so that users can get an immersive gaming experience on their OnePlus smartphones. Apart from this, the update also brings the latest June security patch.