After numerous leaks and rumours surfacing online, the upcoming flagshipOnePlus 5 smartphone may finally be launched next month. If a recent report of GizmoChina is to be believed, OnePlus 5 is all set to be launched on 15th June. 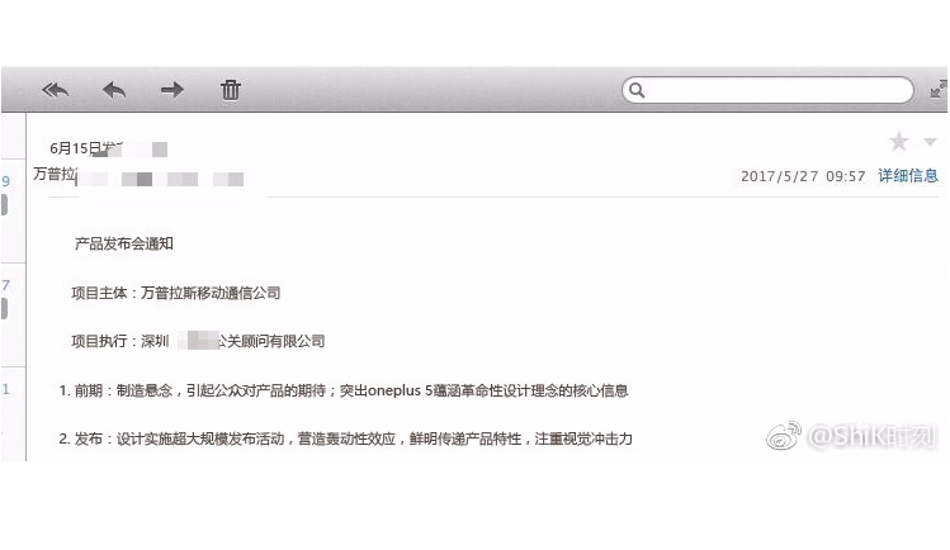 The leaked internal mail from OnePlus has surfaced on Chinese microblogging website, Weibo revealing the launch date for the OnePlus 5. The launch date is also expected to be near as recently OnePlus has decided to discontinue OnePlus 3T in U.K and the rest of Europe from June 1st. However, it is to be noted that the OnePlus 3T (both 64GB and 128GB variants) will continue to be available for purchase in India until later this year.

Recently, OnePlus CEO Pete Lau and Qualcomm revealed that Qualcomm Snapdragon 835 chipset would power OnePlus 5. Also, the brand has partnered with DxO to enhance the camera experience on OnePlus 5. For those who are not aware, DxO is the brand behind the popular photography benchmark, DxOMark. OnePlus is reported to add dual-camera setup on its flagship device but the bone of contention lies in the placement of the cameras. Some reports, including this one, indicates that it will be vertically aligned, but other shows that it will be aligned horizontally.

As we had reported earlier, the OnePlus 5 will have a 5.5-inch screen, metal unibody design coupled with 6 GB RAM and the latest Qualcomm Snapdragon 835 processor. It is being touted as a competitor to Samsung Galaxy S8 though the pricing would be less than that of its Samsung counterpart but higher than 3T as the components being used in this smartphone are more sophisticated. If the leaked images are to be believed, the device will have a dual rear camera setup, and as OnePlus has partnered with DxO, thereby, it is expected that camera experience will be more subtle.

With a cutthroat competition already going on in the industry, OnePlus 5 is surely roaring to make it more interesting, with the leaked specs being this powerful, a true blue contest is on the cards.