The smartphone will run on Android Nougat operating system.

In the GeekBench listing, the Nubia Z17 got 1853 points in single-core test and in muli-core test it received 6379 points. As per the listing on Geekbench, the Nubia Z17 has 4GB RAM and Qualcomm Snapdragon 835 1.90 GHz octa-core processor. The handset is based on the Android 7.1.1 Nougat operating system. 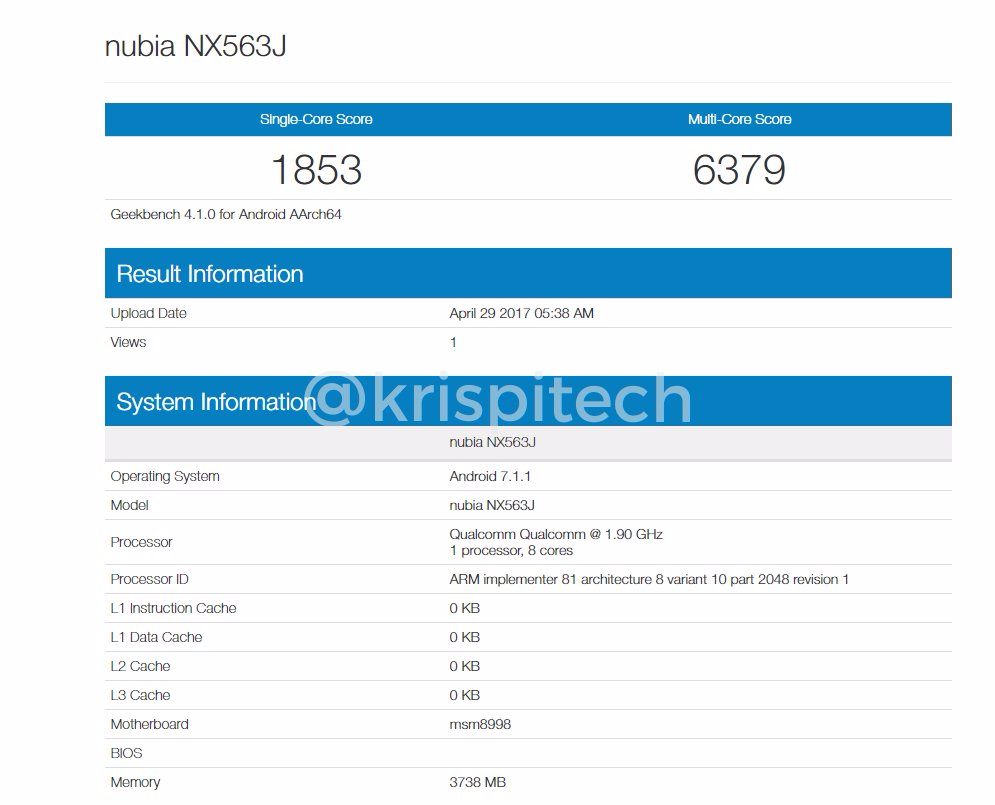 A popular tipster Krisptech has leaked this news about Nubia Z17 (NX563J) via his twitter handle.

Since now, the Nubia Z17 has started surfacing online, we expect some more leaks in coming days which can reveal the specifications, launch date and price of the phone. So stay tuned to The Mobile Indian for latest updates on this.

To recall, the Nubia Z17 mini smartphone comes with a price tag of CNY 1,699 (approx. Rs 15,914) for the 4GB RAM variant and CNY 1,999 (approx. Rs 18,724) for the 6GB RAM option. The major highlight of the smartphone is the dual-camera setup situated at the back panel. There are two 13-megapixel sensors at back, with one being a monochrome, while the other sporting an RGB lens, something similar to what we have seen in Huawei dual-camera smartphones. However, the camera comes loaded with a host of interesting features including ultra-fast focus, aperture adjustment from f/1.0 to f/16.0, 3D beautification and so on. Both the cameras come with aperture f/2.2, OIS and 4K video recording. For the front, there is a 16-megapixel camera with 80-degree wide-angle lens for selfie and video calling.

The Nubia Z17 mini features a 5.2-inch full HD display with a screen resolution of 1920 x 1080 pixels along with a 2.5D curved glass. The smartphone comes in two variants including one with Qualcomm Snapdragon 653 octa-core processor along with 6GB RAM and Qualcomm Snapdragon 652 chipset along with 4GB of RAM. For storage, there is a 64GB internal storage, which can be further expanded up to 200GB.

On the software front, the runs on Nubia UI 4.0 based on Android 6.0 Marshmallow and is juiced by a 2950mAh battery with fast charging support. On the connectivity front, the device supports dual SIM, 4G VoLTE, Wi-Fi, Bluetooth 4.1, GPS, NFC and USB Type-C port.