ZTE is all set to launch a new smartphone which goes by the nameNubia Z17 Mini with dual-camera setup on March 21 in China. The company has released a poster on its official Chinese microblogging website Weibo which reads ‘see more beautiful’. The company has already started sending invites for the event as well. The teaser hints that the smartphone will come with a dual rear camera.

As per rumors, the Nubia Z17 Mini is expected to feature 5.2 inch full HD display with 1080 x 1920 pixel resolution. Even though ZTE did not provide any details on the camera aspect, the list of leaked specs includes two 13-megapixel cameras on the back with Sony IMX258 sensors, while in the front there’s a secondary 16-megapixel camera for selfies and video calls. It will come in two variants 4GB RAM with Snapdragon 652 SoC and 6GB RAM with Snapdragon 653 SoC. The Nubia 117 Mini will come in two colours – Black and Gold. However, there will be another Blue colour variant with 4GB RAM and Snapdragon 653 SoC. 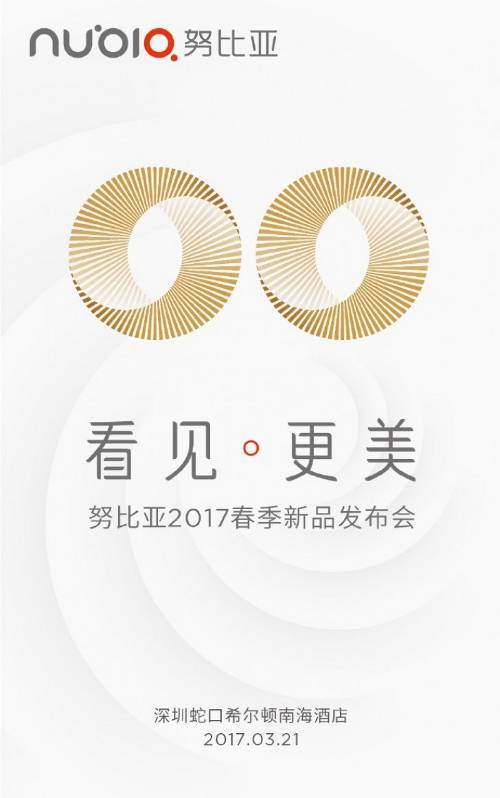 The smartphone will come with 64GB internal storage. A 3000mAh battery will power the phone with for Quick Charge 3.0 technology. There will also be a USB Type-C port and fingerprint sensor in the device. It will be running on Android 7.0 Nougat operating system right out of the box.

The Nubia Z17 Mini will be the successor of the Z11 mini which was launched in India last year for Rs 12,999. To recall, the Nubia Z11 Mini has a Fingerprint scanner that can be used as a camera shutter button or for taking screenshots. Long press the fingerprint area to quickly enter SuperSnap and take screenshots quickly and conveniently, such as Long Screenshot, Free Screenshot and Screen Recording.

It has 5 inch full HD display with Gorilla Glass 3 scratch-resistant glass. With a thickness of just 8mm and weighing just 138 grams, it’s both slim and lightweight. The Nubia Z11 Mini is armed with an octa-core Qualcomm Snapdragon 617 (MSM8952) processor which accompanied with 3GB of RAM. For gaming, the graphics are handled by Adreno 405 GPU and its chipset is built on 64-bit architecture. It holds 64GB as built-in storage which is expandable upto 200GB. The Nubia Z11 Mini runs on the Android v5.1 (Lollipop) OS, which is further customized by Nubia UI 3.9.6.