Nubia is expected to launch Z11 Mini S, which is the successor of Z11 Mini, in Indian quite soon. A Tweet on the company’s official handle reads – “Boss is coming back! The most awaited smartphone sequel of the year is finally coming to India, are you ready? #nubiaIndia #MightyReturnS”. 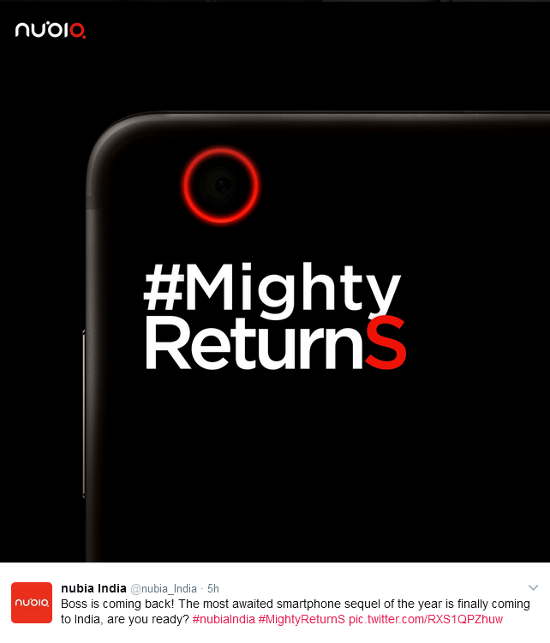 Nubia Z11 Mini S is armed with a 5.2-inch full HD (1920 x 1080) IPS 2.5D display with Corning Gorilla Glass protection. It is powered by Snapdragon 625 2GHz octa-core processor, Adreno 506 GPU and 4GB RAM. There is 64GB/128GB of internal storage in the phone apart from which it has an expandable storage slot that can hold a micro SD card of up to 200GB capacity. The smartphone runs on Android 6.0 Marshmallow operating system with Nubia UI 4.0 and comes fitted with a 3000 mAh battery. A fingerprint sensor is on its rear panel which, the company claims, can unlock the phone in 0.2 seconds.

The Nubia Z11 Mini S has a 23-megapixel shooter and a LED flashlight on its rear panel. The rear camera has Sony IMX318 sensor and phase detection autofocus (PDAF) feature. In its front lies a 13-megapixel camera. Besides, the smartphone offers Hybrid Dual SIM, 4G LTE with VoLTE support, USB Type-C port, WiFi 802.11 ac, and GPS support. The phone has a dimension of 146.06 x 72.14 x 7.60 mm and it weighs 158 grams.