Nokia will bask the glory on the upcoming Nokia EOS camera and tout the term Nokia Zoom. For the same reason, company has filed a trademark for Nokia ZOOM.

Nokia is expected to launch a Lumia series smartphone with 41 megapixel PureView imaging technology and is likely to be branded as Nokia EOS. This smartphone with Windows Phone 8 running on it is scheduled to launch on July 11, next month. Meanwhile, Nokia has passed on the press release with the text – Zoom. Reinvented; which indicates to new breed of smartphones with enhanced camera technology.

Nokia has also filed for a trademark on the term Nokia Zoom. MyNokiaBlog spotted the trademark listing and it is quite evidential that it is intended not only just for the upcoming device but for more to come in future. 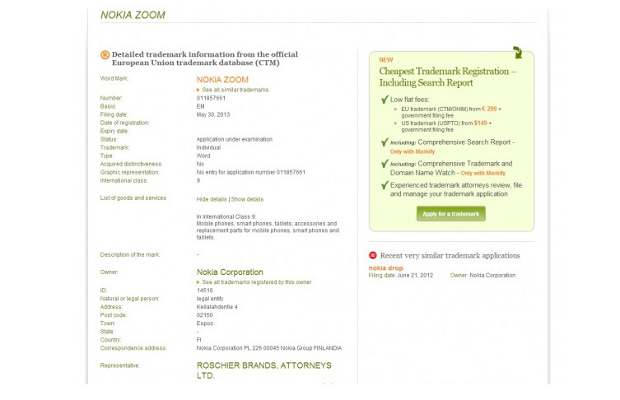 The upcoming device is rumored to be branded as Nokia Zoom or Lumia 1020. There is no clarity on whether Nokia will offer just one device with 41 megapixel image sensor. We hope that more such devices flaunting PureView imaging technology are released in future.

Nokia PureView imaging technology brought the lossless zoom to the mobile platform and now the company aims to do something similar with the Nokia EOS device.