Nokia has announced the Lumia 1520 and Lumia 1320 with new set of apps and features at the Nokia World 2013 in Abu Dhabi, UAE. Nokia CEO Stephen Elop stated that the innovations and features of the new Lumia 1520 and Lumia 1320 will be combined with the Windows Phone 8 Update 3 and pushed to other Lumia smartphones as Lumia Black. The Lumia Black update is expected to be released for the Lumia series devices early next year. No fixed time frame of Lumia Black update release has been shared by Nokia.

Nokia Lumia Black will integrate innovations, features and apps from Lumia 1520 and Lumia 1320 with the Windows Phone 8 Update 3. The Mobile Indian reported about Winsdows Phone 8 Update 3 and the features such as multi-core processor support, full 1080p HD display support, Driving Mode and other improvements. While other Lumia devices may not benefit from full HD display support and multi-core support, Nokia will include many other Lumia exclusive features that debut with the Lumia 1520 and Lumia 1320.

Top features in the update will be Nokia Camera app. But, one must note that some of camera features may be hardware driven rather than software. As a result Nokia Camera app will basically replace the Pro Cam app while the Smart Cam app will continue to exist. 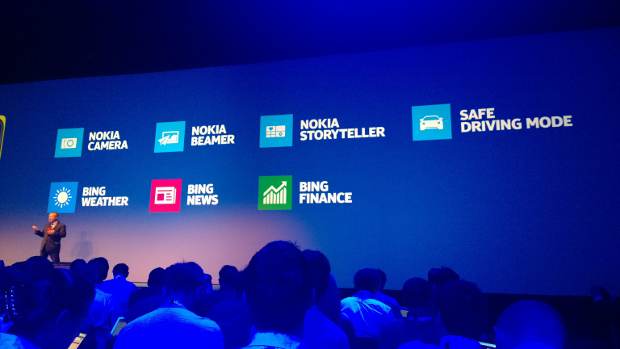 Storyteller is the new app that basically lets the user create a storyline out of geotagged photos and videos on the HERE maps. The HERE maps will automatically add the geotagging information to the phones if the Location services are enabled to create a chronological picture memory for a journey. Nokia Video Director is easy to use and share video editing software that will be made available to other Lumia devices as well. Nokia will make a more interactive version of the Beamer app to help users share displays, project content on the other HTML5 enabled devices.

Nokia Refocus is a new app driven service that will be made available to all devices sporting PureView Imaging technology. The Refocus app will allow the user to select different areas of an image clicked with PureView and choose to refocus them. Those selections will appear as a motion jpg or gif (format is not known as of now) flaunting a cool refocussing effect. The Refocus app will get a separate web section – refocus.nokia.com and will be shared on Facebook through a dedicated app to enjoy the refocussing effect.

Elop also promised that the official Instagram app will be made available for Windows Phone platform in coming few weeks.