Nokia has formally announced a new Windows Phone 8 based smartphone – Lumia 925. This new smartphone come with a full aluminum casing and improvement over the the Lumia 920 handset. All new Lumia 925 also arrives with improved camera sensor and bunch of Imaging centric improvements on the software side. Nokia Lumia 925 will be offered in grey and metallic black colors starting from June in UK, Germany, Italy, Spain and China regions.

Inside the aluminum chassis, Nokia has packed a dual-core 1.5 GHz Qualcomm Snapdragon S4 Pro mobile processor coupled with 1 GB RAM and 16 GB internal storage. The Lumia 925 flaunts a 4.5-inch Amoled display and sports 1280×768 pixel resolution natively. That means it is 720p HD ready and just about big enough for the hands. This display has been constructed using the Gorilla Glass 2 technology for strength and also features Nokia ClearBlack technology for blocking the reflection from the screen. By default the Nokia Lumia 925 will run Windows Phone 8 mobile OS and will come with bunch of Nokia Lumia exclusive apps as well as services. 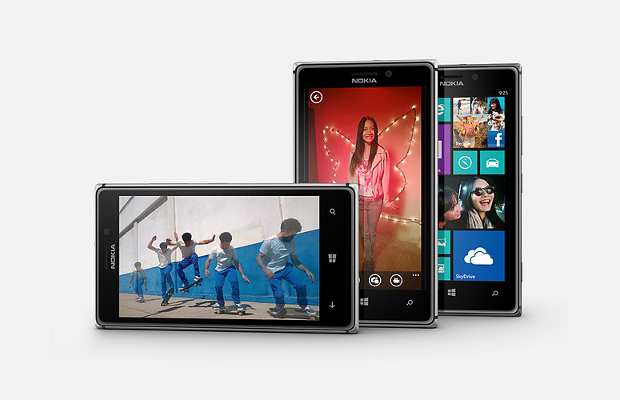 Major changes are made in the imaging department where Nokia has used the 8.7 megapixel image sensor with PureView technology as the one used in Lumia 920. However, the optimization comes in the lenses where Nokia has added a layer of glass lens as the sixth lens with the regular five plastic lenses in the image sensor. We were kind of hoping for Carl Zeiss optics but as of now the Nokia hasn’t shared any such details.

Apart from that, Nokia has added a dual-LED flash and improved optical image stabilization with the tweaked algorithms to deliver better performance in both – bright and low light conditions. Nokia has also added new Smart Camera mode that can be made default camera mode to click great quality images with minimal fiddling around with the settings. Refreshed camera user interface also brings Pro mode that lets the user enjoy full manual control of the camera.

The Smart Camera mode allows the camera to capture ten images with the motion focus feature. This enables the user to employ changes such as remove blur or alter images in the background. Apart from that, the Nokia Lumia 925 will also support the Long Term Evolution networks and added 2000 mAh battery for longer time.

The Lumia 925 will also feature wireless charging supported with additional sleeves available separately in white, black, yellow and red colours. The Nokia Lumia 925 smartphone will be priced around Rs 33,380 ($469) approximately before taxes and subsidies. The company is yet to clarify its plans about launching this smartphone for other regions including India.