Now doing money transactions for unbanked becomes easier as the Nokia money service will come as a pre installed on all new Nokia handheld devices.

Nokia today announced its plans to embed the Mobile Money client in all Nokia devices in India going forward. This service provides access to financial services to people and business establishments who do not have a bank account or access to a financial institution through their mobile phones.

Nokia Money mobile financial services initiative is already being implemented in India through partnerships with Union Bank of India (UBI), Yes Bank, Obopay and a wide range of merchants, retailers and business correspondents.

The services, called Union Bank Money and Mobile Money Services by Yes Bank, are already available in several regions and will be rolled out across several other parts of India in the forthcoming quarters.

With the Mobile money application that has been names as”Money” consumers will have the option of subscribing to either Union Bank Money or YES Bank Mobile Money Services from their Nokia devices. The app can be activated at Nokia retail and other outlets, who are also authorized banking correspondents of Yes Bank and/or Union Bank of India. 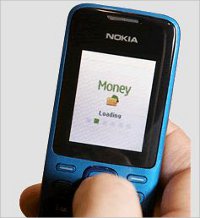 “Mobile Money services eliminate dependence on the physical presence of a branch or availability of internet banking services. Embedding the Money client in the Nokia devices going forward further makes the service ubiquitous and accessible for consumers across categories. We believe our partnerships with Yes Bank and Union Bank of India will help us connect the unbanked population in the country by leveraging the wide reach of our combined networks and the deep penetration of mobile services in the country.” Said Gary Singh, General Manager, Nokia Mobile Payment Services .

The Money App is deeply integrated in its functionality with the phone and other phone services. For example, the selection of recipient in a send money transaction is directly integrated with the phone book; sending money thus becomes as simple as sending an SMS or making a phone call.

To make the service simpler, the user-interface is de-coupled and separated from data transport. Therefore, the user does not need to know which transport (SMS, GPRS or Wifi) is in use during the transaction.

Consumers who already own a Nokia phone without the Mobile Money client can simply visit a Nokia Money agent and get the application loaded onto their existing phone. They can also use the service via text messages, which do not require the client.