The smartphone has been spotted on GFXBench website and appears to be a low-end device.

Earlier this month, HMD Global launched its first Nokia Android-powered mid-range smartphone, the Nokia 6, in China. The device got a ravishing response during pre-order and went out of stock in just one minute in its first flash sale, which took place on January 19th, 2017. Further, a low-end Nokia branded Android smartphone with model name “Heart” has now been listed on GFXBench website. 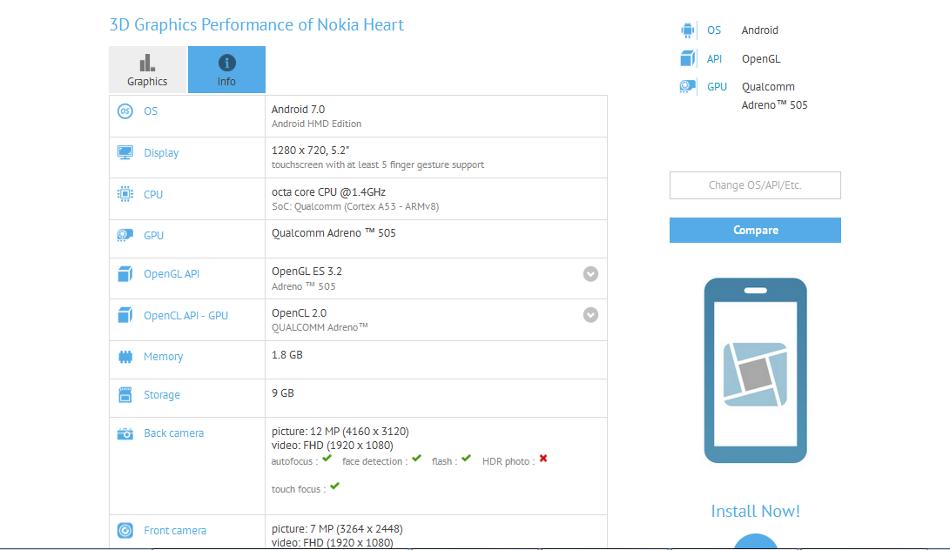 As per GFXBench listing, Nokia Heart features a 5.2-inch HD display with a resolution of 720×1280 pixel. It is powered by a 1.4GHz octa-core Qualcomm Snapdragon 430 processor, paired with Qualcomm Adreno 505 graphic processor, 2GB of RAM and 16 GB of internal storage. On the camera front, the smartphone sports a 13-megapixel rear camera with LED flash and an 8-megapixel front-facing camera for selfies. The Nokia Heart runs on Android 7.0 Nougat operating system and offers Bluetooth, NFC, WiFi, Accelerometer, Light sensor, Pedometer, and Proximity as connectivity options.

Moreover, as per reports, the Nokia Heart is expected to be priced around $150-200 which can be a game changer in the budget segment. Before this, brands like Xiaomi have been ruling the budget smartphone category and it will be interesting to see what pricing does the Finnish company goes for.

Just yesterday, we reported that Nokia finally admitted that it is working on a flagship smartphone boasting the new Qualcomm Snapdragon 835 chipset and there is a high possibility that the said smartphone could be long rumoured Nokia P1. Apart from this, the company also indicated the possibility of landing on the Windows platform again.

Rounding up all the new leaks and reports, HMD Global might unveil multiple Nokia branded smartphones at the MWC 2016, so we would expect to get a more clearer picture as we move along the month of February.

Note – The cover image is of Nokia 6

Stock Android: The Real Power Behind the Pixel